Watch any two people throwing darts, and there’s a good chance that it’s the 301 darts game they’ll be playing.

According to the American Darts Association, almost 17 million Americans step up to a dartboard every year, with this all-time barroom classic proving to be a firm favorite among both seasoned pros and darting newbies alike.

There’s a good reason for that:

Unlike other darts games such as Baseball, Cricket, or Around the Clock, 301 is incredibly easy to get to grips with:

Start with 301 points, and the first player to get that score down to zero wins the game.

It sounds simple, right? But if you’ve never played before, stepping up to that board for the first time can be a little daunting, not to mention confusing.

In today’s guide, you’ll learn how to play the 301 darts game, with a clear, easy-to-follow outline of the rules, scoring and everything else you need to know to master the sport’s most enduring game.

301 darts isn’t just a popular barroom game, it’s a variation of the standard darts game played in world-class competitions, with professional players starting from either 501 or 701 and aiming to “check out” by reducing that score to zero as fast as possible.

Ages:  Suitable for all ages and abilities.

Difficulty:  Easy, but get a calculator ready for keeping track of the scores!

Main Objective:  Be the first player to reduce your score from 301 to zero.

Why we love it:    It’s a perfect game to break out no matter who you’re playing with. Newcomers will like the straight-forward rules and simple scoring while experienced players will relish the challenge of landing double and triple scores and seeing how fast they can finish.

For the best gameplay, use a standard, tournament-size 18″ diameter board like Viper’s competition-grade regulation dartboard will work perfectly.

Get a much smaller board, and the game becomes too difficult for newcomers to enjoy. Go for a larger model, and there’s no challenge for more experienced players.

For games with fellow adults, a standard set of steel-tipped darts measuring no more than 12″ in length will work perfectly.

If you’re getting the kids involved, you’ll probably find it safer to play on an electronic dartboard with soft-tip darts.

Buying a full package like Win.Max’s Electronic Soft Tip Dartboard Set with Cabinet means you’ll save money on buying the board, your darts, and a scoreboard, all while ensuring you’re playing with top-quality products. 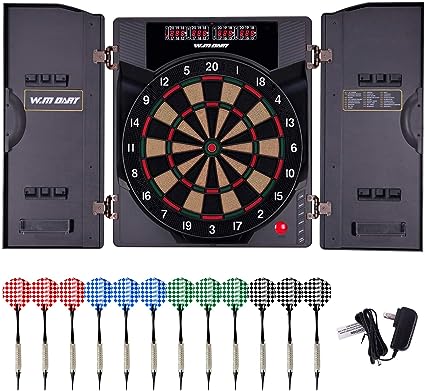 This all in one electronic dartboard set is a great option if you don't want to mess around buying all the pieces separately.

If you already have a dartboard with its own cabinet, the interior sides of that cabinet will have a dedicated space for keeping score.

In that case, all you need to do is grab yourself a piece of chalk and get started.

Otherwise, you might want to consider spending a little money on a digital scoreboard like the best-selling Viper ProScore.

Since 301 requires a lot of math work, getting a digital device saves you the taxing chore of working it all out in your head or wasting time with a calculator.

Once you’ve got all three things in place, it’s time to get your game underway.

Dartboard Position: Place the board so that the bullseye is 5’8″ from the floor.

Throwing distance: 7’9″ from the board face (reduce to seven-feet if playing with children or first-time players)

Throwing line: Minimum of 18″ and clearly marked. This line can be anything from a simple line painted or chalked onto the floor, to an actual object such as a piece of wood.

Players must ensure that their toe isn’t over the edge of this line before they throw the dart.

301 darts can be played as a one-on-one competition or in teams of two in a variation known as ‘Doubles.’

To decide who goes first, you can either toss a coin or use the traditional method of ‘bulling-up.’ As the name implies, this involves each player throwing a single dart at the board. Whoever lands closest to the bullseye goes first.

What happens next depends on how strict you are about sticking with the classic set-up. If you want to play by the book, each player must first land a double in order to ‘get on the board’ and start knocking off those points.

If you’re new to darts, you might find it simpler to skip this and just start playing.

Each player starts the game with 301 points and reduces their score according to the number of points they gain by throwing darts at the board. The number of the section where the dart lands determines how many points are awarded.

So if you landed one dart on 20, another on 5, and a third on 10, your total score for that turn would be 35. You would then subtract that score from your total points, so if that was your first turn, you’d subtract 35 from 301 to put your score at 266.

On your next turn, you’d add up the total points scored on the board and subtract that amount from 266, and so on until one person reaches zero and is declared the winner.

Finishing on a Double

In the official version of 301, an extra challenge comes into play as the game reaches its final stages.

That challenge is that you don’t just have to reach zero, you have to do so by finishing with a double score.

While ‘finishing on a double’ does keep things interesting for more experienced players, beginners may want to leave out this part of the game and focus solely on getting your score down to zero.

Scoring Doubles and Triples in 301 Darts

For example, if you landed your first dart in the outer ring on the section labeled ‘1,’ you’d get two points. If your second dart then landed on the inner ring of the ‘1’ section, you’d get three points.

What Happens if You Exceed the Number of Points Needed to Win?

The aim of 301 is to finish on exactly zero. So, If you score more points than you need to finish the game, none of the points from that turn will count.

For example, say you need 36 points to win. You’re aiming for double 18 but instead land on double 20, putting your total score at “40.”

That means your turn is effectively canceled and you’ll need to try again on your next turn to finish on exactly zero points.

The best strategy for winning at 301 is to aim for double and triple points all the way down until you reach a score of 170 and under.

From that point on, it’s possible to win the game in just three darts.

For example, if you reach 170, you can then win the game with the following:

If you reach 160, you could win with two treble twenties and a double 20, and so on.

Though this might require a bit of mental calculation, keeping an eye on what you need to win and going for those big, point-scoring doubles and triples is undoubtedly the fastest way to victory.

The age-old saying that practice makes perfect is certainly true when it comes to darts. Simply put, the more you play, the better you’ll get.

That said, there are a few specific things you can do to improve your chances of winning at 301.

First, practice your grip. Professional players recommend holding the dart like a pen with very little pressure to help you get a comfortable grip and accurate throw.

Second, practice aiming for those double and triple rings. As we’ve already discussed, landing your darts in these areas is always the fastest way to win.

Finally, familiarise yourself with the scores needed to ‘check out’ and win the game as fast as possible. The more you can memorize these scores, the less mental arithmetic you’ll have to do in your next game.

Once you’ve been playing 301 for some time, you might find that it starts to get just a little too easy. For experienced players, getting rid of all those points can take just a couple of throws which, let’s face it, can drain all of the fun out of things.

With that in mind, you might want to consider taking your game to the next level by upping the points to either 501 or 701.

With each game, the rules and objectives are exactly the same as in 301, it’s just that you’re starting from a higher number.

While that might not seem like a huge change, making things a little more challenging can make all the difference in helping you rediscover why so many people love this all-time barroom classic.

SEE ALSO: 27 Fun Dartboard Games to Play at Home or at the Bar