Baseball and darts aren’t usually two games that you would expect to go together, but this hasn’t stopped players from creating Baseball Darts.

The rules are definitely worth learning if you and your pals are looking for a lengthy game to play on the dartboard.

Make sure that you play with the most committed players though – this game continues until there is a clear and obvious winner, like in baseball.

Baseball Darts is like a game commonly played by our neighbors across the pond, known as Cricket Darts.

A versatile game, although it is best played in a group you can also play solo. Handy if you are looking to perfect your dart accuracy.

There is no math involved like the more traditional game of darts. So it certainly is a game that you can use to refine your darts skill, whilst being great fun too.

You could be a darts lover looking for an alternative to the classic 301 darts. Or if you’re a novice looking for an interesting spin on baseball, then this guide on Baseball Darts may be down your alley.

RELATED: Check out our ultimate guide of 27 fun Dartboard games to play at home or at a bar.

What is Baseball Darts?

Despite the name, Baseball Darts rules are much different from the regular version of baseball.

The name comes from the fact that both games last 9innings.

Number of Players Required: 1-Unlimited. Played solo, in pairs or in teams.

Who Can Play It: Recommended for any dart lover, from kids to adults.

Difficulty: Easy-Medium. Can be quite complicated at first but gets easier the longer you play.

Main Goal: Get the highest score at the end by scoring throughout the innings.

Why we love it: An ideal game to play for those who are looking for a darts game to play when in a group. It can lead to some tense finishes as scoring is constant and really rewards those players who can be accurate.

Use a standard dartboard, which is 18’’ in diameter as pretty much every dart game uses this size.

If playing in a local sports bar this will almost certainly be the size dartboard used. If you’re looking to adjust the difficulty though, look for a smaller or bigger size dartboard.

TG Champion has a dartboard that fits the correct specification at a reasonable price. 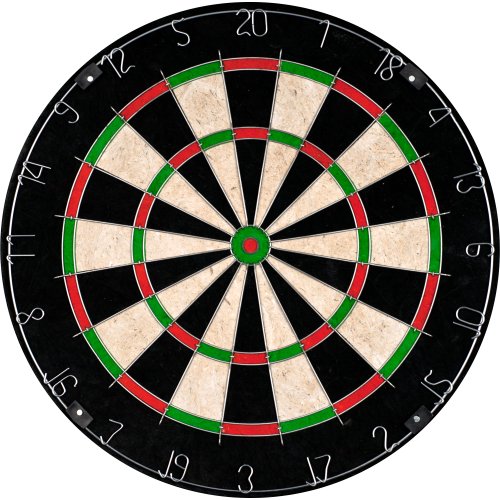 Bristle Dart Board, Tournament Sized Indoor Hanging Number Target Game for Steel Tip Darts- Dartboard
$36.83
Buy Now
We earn a commission if you click this link and make a purchase at no additional cost to you.

Darts come in many different weights and lengths, and finding the ideal set for yourself is a case of going through trial and error.

As a rule of thumb, the heavier the dart the easier it is to throw especially for those who are new to the game. Lighter darts are good for those who throw a bit harder, however.

A set of darts like this from WINSDART come with everything you’ll need to start playing.

It would be an idea to also have something to write the scores down on, whether it’s a traditional chalkboard, a smartphone, or a trusty pen and paper. 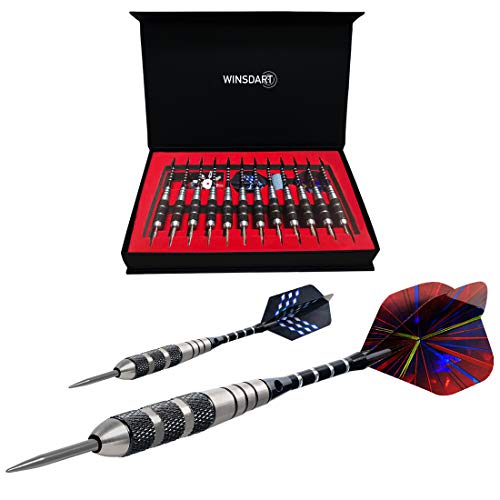 WINSDART Steel Tip Darts Set 12 Pack 22 Grams with Nonslip Iron Barrel Aluminum Dart Shafts 2 Style Flights and Darts Sharpener, Gift Case (Black)
$29.99
Buy Now
We earn a commission if you click this link and make a purchase at no additional cost to you.

If setting the game up at your home, you will need to know the official positions to set up the darts equipment.

Dartboard Position: You will need to place the bullseye 5ft 8in away from the floor.

Throwing line: Also known as the ‘oche’, place something 7ft 9in away to ensure that players are throwing from the same distance. A bit of tape on the ground would be ideal.

Choose one person to keep score to ensure that the game is fair. Decide if players are playing solo or in teams before starting the game.

The game doesn’t need too much setup to actually start the game once you have the teams decided and the game area is properly done.

Decide who starts the game first by having players bull up. This is where players throw a dart at the board and the closest goes first and the furthest away goes last.

If playing in a team, nominate a player to bull up.

How to Play Baseball Darts

Scoring in Baseball Darts could not be simpler to calculate which is ideal for those not too confident with numbers.

If you manage to hit the middle part of the number which is also in green or red then this is worth 3 runs. Missing the number or dartboard entirely scores 0 runs.

As previously stated, each player gets three darts at each number and the score gets tallied up as it goes.

For a more professional look, mark out each player down the side of a piece of paper and write 1-9 along the top.

Create a grid and mark each score against the player as the game goes on.

What Baseball Darts rules should I use when playing with teams?

If you’re planning on playing with teams, the scoring stays exactly the same on the dartboard.

The only thing you need to decide on is how many darts throw each team gets. This is entirely up to yourself.

You could even have a mega game of Baseball Darts by allowing each player to have a full innings of nine each! Choose a version that works for you and your friends.

What rules can I add to Baseball Darts to make the game harder or easier?

Some players like to insert a rule called the 7th inning stretch. It’s a harsh rule but it can really change the outcome of the game and keep things a lot more interesting.

The 7th inning stretch is where a player’s entire score gets halved if they don’t manage to score a point in the 7th innings.

If there is a bit of a skill difference between players, introduce a handicap to make the game slightly fairer. Give the less skilled players a headstart to their score to even things up.

Baseball Darts is certainly a great group game to play for novices and experts alike if you find yourself looking for an easy darts game.

It is always a good idea to have a selection of games that use a dartboard under your hat however, ready to bust out at any appropriate time.

A good example is Around the Clock, another game that you can play within a group and can help refine your darts skills.

Killer is another group game that uses a standard dartboard, although the game is a lot more fun then the name may suggest!

If you’re playing darts in a bar, then the chances are that there is a pool table nearby. If so, check out our guides to 8 ball pool and Cutthroat pool.