Scopa is a popular card game with rich history and many variations. If you like games focused on counting and team play, you’re going to love it. Scopa rules, however, are pretty complex – these gameplay instructions might come in handy.

Scopa (also known under the names of its variations like Scopone, Scopetta, or Scopone Scientifico) is a traditional card game for individuals or 2-3 equal teams.

Along with Tressette, Calabresella, and Briscola (see our guide toBriscola rules), Scopa is among the most popular games in Italy where it originates. The game focuses on clever tactics and cards fishing.

This Scopa rules guide will cover the following:

Read on and learn how to play Scopa according to the original rules.

Scopa means ‘broom’ or ‘sweep’ in Italian, and sweeping is, indeed, one of the most desired achievements in this card fishing game.

Nevertheless, whether you’ll be able to triumph or not depends both on your strategic skills and pure luck.

Main Objective: Capture cards with different values and beat others with your total score.

Why We Love It: Scopa is one of the games you can easily play for hours and never get bored.

A brief history of Scopa

According to historical sources, Scopa was widespread throughout Italy as early as the 18th century.

It is highly probable, thought, that the game is even older than that, as it has a lot in common with a 16th-century gambling game called Primiera.

Nowadays, the game is popular in many countries with livelly Italian communities or historical ties to Italy.

However, players in countries like Libya, Argentina, or Chile usually play the game by slightly altered rules.

What You’ll Need to Play Scopa

Scopa can be played with standard or specialized decks of cards. These are your two options:

They only contain 40 cards, which is exactly what you need for this game. They also include the ‘coins’ card suit, which plays a critical part in Scopa’s scoring. 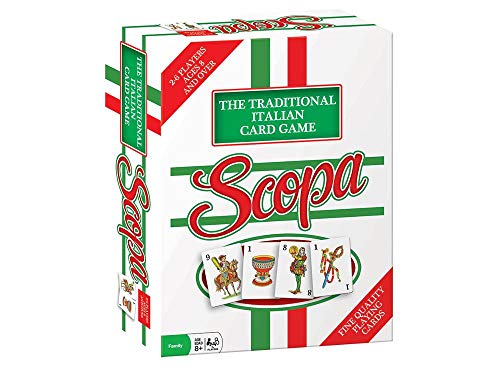 Scopa Traditional Italian Card Game
$20.19
Buy Now
We earn a commission if you click this link and make a purchase at no additional cost to you.

Also, you will need to replace the ‘coins’ suit with the ‘diamonds’ card suit when counting your score. 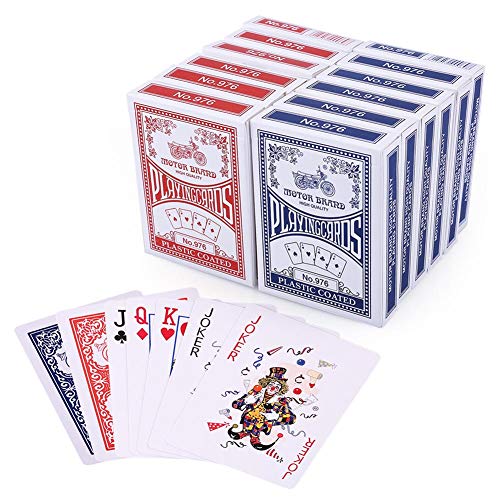 Standard Decks of Cards
$26.99 $13.99
Buy Now
We earn a commission if you click this link and make a purchase at no additional cost to you.

Besides the cards, you only need a table (or similar surface) to play Scopa.

Scopa rules are relatively simple, but they involve lots of counting and some tactics.

The initial setup is pretty simple:

Now you’re all set and ready to start playing. But first, check the values of all the involved cards since they are essential for the gameplay.

In Scopa, each card has its value. It goes as follows:

How to Play Scopa

In Scopa, your goal is collecting (or, more precisely, capturing) the cards in the center and counting their values. To do that, you must follow specific rules.

First, each player chooses a single card they want to play. You can use this card for fishing cards from the table or leave it there for the others. If you meet the conditions to do so, you can pick up as many cards as you want.

Your card can capture other cards if:

If you can’t make any of the abovementioned matches, lay your card face-up in the center. It can be captured by you or others in the next rounds. This also applies following scopa, when there are no more cards to match.

To mark the occurrence of scopa, place the card you’ve played in a pile sideways face-up and put all the cards it captured on the top of it.

Players take turns until they play all cards in their hands. Then, the dealer provides them with a new set of three cards. All the remaining face-up cards in the center stay in their places.

If there are no more cards to deal, pass the remaining cards in the center to the player who has captured the cards last. (note that this is not treated as scopa even if the card values match)

Scoring is the most important (and complex) part of the gameplay. Players or teams must count their piles as follows:

If multiple players have prime, only the one with the highest total value scores. (for this purpose, cards have the following values:

Note: No one scores if a tie occurs in any of these categories.

The first player/team to gain a total score of 11 points (or more) is a winner. The game continues until this occurs – or even longer in case of a tie.

How to Play Scopa – Video Tutorial

Who goes first in Scopa?

First, pick a dealer. It can be, for example, the oldest player. If only two players play, the remaining one goes first. In the case of more players, the person to the right from the dealer takes turns first.

Scopa can be played by 2 to 6 players. However, the more players are involved, the shorter (and potentially less enjoyable) the game is. Also, five players can only play as individuals since they cannot form equal teams.

What does sette oro mean in Scopa?

There are many variants to Scopa, and they mainly differ in scoring. Sette oro is an alternative scoring category that awards one point to the player who has collected seven coins or diamonds.

Other Similar Games to Scopa (Our Guides)