Looking to learn and prepare yourself for a classic game of nine-ball pool before the weekend? Then this complete guide on 9-ball pool rules and gameplay instructions will definitely help.

Although it’s a game decades older than the year of its tournament debut, nine-ball pool shot to fame with WPA’s first U.S. Open 9-Ball Championship in 1976.

Nine-ball is a cue game that makes us fall in love with billiards all over again. Derived from the classics, the game promises a good amount of competition and better amounts of fun. Nine-ball game rules give you the ease and flexibility to score without complications, while at the same time, they also set the standard for a game of international importance.

What Is 9-Ball Pool?

Nine-Ball pool creates the framework for several similar pool games played with 3,6,7 and 10 balls. The only important rule that dictates the game is that the order of pocketing object balls cannot change. The target 9 ball is supposed to be pocketed like any other object ball with no special rules.

Number Of Players: 2 (or 4 when played in doubles)

Main Objective: Pocketing all object balls in increasing order of value from 1 to 8 and finally the 9 ball to win the game.

Looking Back At The History Of 9-Ball Pool

Nine-Ball pool originated back in the year 1920 in the United States, and it is safe to assume that its predecessor, 8-ball pool was a major source of inspiration. Played with the same equipment and similar rules, nine-ball came to be known as the most widely played and popular billiards game with eight-ball following suit.

Historically it was associated with gambling. However, international billiards tournaments were quick to legalize the game, set standard rules, and protocols, and ensured public acclamation. Over time, globally renowned pool names like Efren Reyes and Thorsten Hohmann became the face of the nine-ball.

What You Need To Play 9-Ball Pool

Walk into a pool-club, and the set of pool you see would most probably be the one you’ll be needing for nine-ball. Although it requires the most standard set of equipment, let’s list them down for you if you’re planning to own one of your own.

– These consist of 6 pockets, each of which is used as a part of the game – The game is played using 10 balls — 9 numbered and a single white cue ball.

– All 9 balls are distinctive in color and numbered from 1 to 9.

– The 9 numbered ball is striped in yellow and white and is the target ball.

– From the numbered balls 1 to 8, whichever is of the lowest value remaining on the table is the object ball.

– Nine-Ball pool is played using a diamond-shaped rack, in contrast to the regular triangular one.

– With the 9 ball in the center and the 1 ball closest to the shooter, the remaining 7 balls are racked randomly.

– The ideal length of each side of the diamond is about 6.75 inches.

– Each player requires one cue stick that can either be used in rotation or distributed one each.

– Key features of a good cue stick are its steel tip, light-weight, sturdy design, and length – according to the convenience of the player.

– HJM Pool is a favored brand for its range of high-quality and reliable cue sticks. 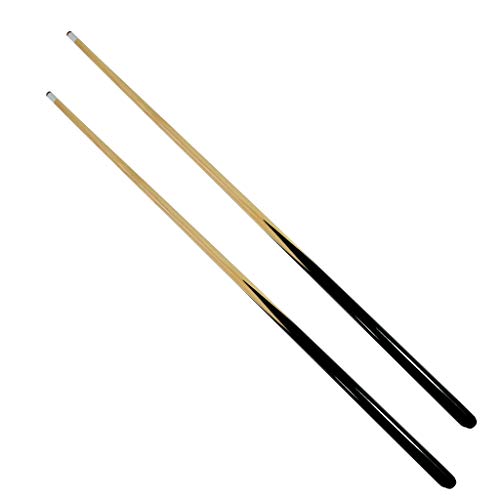 It’s the nine-ball rules that definitively decide what game is being played. Because simple variations in rules, for instance, the same game with a tweak here and there being played with seven balls, can transform it into the seven-ball pool, and it’s the same for ten-ball pool, six-ball, and three-ball pool games.

Most pool games begin with deciding the breaking player by means of toss. Nine-ball, however, has a popular starting tradition called the lag. Both players shoot a cue ball each, and whoever succeeds in shooting it closest to the top rail of the pool table gets to break the rack.

Break and The Golden Break

Unlike other pool games that involve respotting the target ball if it’s pocketed in the break shot, nine-ball allows victory to a professional who can manage this extremely difficult technique or has sheer golden luck. Such a break shot that pockets a nine-ball is called the golden break, and it leads to winning the rack without giving a single chance to the opponent to shoot.

This is a step unique to nine-ball. Push out may have been used at any point during the game in ancient and branched out versions, however, according to standard nine-ball game rules, it can legally only be called right after the break shot.

Push out typically means pushing the cue ball out in the field to a convenient spot. All other rules of shooting apply. In this shot, the cue ball is not required to hit any object balls or rails. This is simply a shot played to place the cue ball in the desired position strategically.

Playing And Winning The Game

Post push out, the players play to pot the ball with the lowest numeric value, and any ball pocketed out of order leads to respotting. Finally, the player that legally sinks the 9 ball wins.

How To Keep Track Of Scoring in 9-Ball Pool?

Do You Need To Call The Pockets In Nine-Ball Pool?

The only rule that dictates the order of legal shots in the nine-ball pool is pocketing object balls in ascending order of number value. The call shot factor like that of the blackball shot in the eight-ball pool or throughout the game in the ten-ball pool is completely alien to the nine-ball.

What Happens If The 9 Ball Is Scratched In Nine-Ball Pool?

Scratching refers to a cue ball being pocketed along when trying to pocket an object ball. According to nine-ball rules, when the cue ball sinks following the 9 ball, it is respotted like any other object ball and is considered a foul. The catch here is that as a penalty, the opponent gets to place the 9 ball as per convenience, making it highly likely to pocket it and win the game in the next turn.

Nine-Ball pool is a celebrated sport across most major international billiard tournaments. WPA World Nine-Ball Championship and the U.S. Open Nine-ball Championships are the most popular hosts of the game, whereas tournaments like the World Cup of Pool and Mosconi Cup host nine-ball as a doubles game.

If you’re delighted to have mastered the game with this exhaustive guide, there are more games that might interest you.

To celebrate some competitive spirit, you can always go for ten-ball pool, raise the bar higher with a solid game of eight-ball pool, or just chill down with a game of bumper pool. All of these pool games are great alternatives.