If you’re looking for a competitive board game that requires strategy to play, then why not learn the Santorini rules?

Santorini is an accessible strategy board game, similar to Risk; it is simple enough for children (8 and over) yet challenging enough for hardcore tabletop gamers.

Santorini is a game of skill aimed at 2-4 players. It is suitable for family gaming nights and a great game to play between small groups of friends.

The rules of Santorini are simple and easy to understand, making it a great game for even the most novice board game player. The game can be set up in seconds, and it can be over in minutes.

Santorini has hidden potential for in-depth, strategic gameplay, but it can be as challenging as you make it. Read on to find out how to play Santorini and why we love it.

Santorini is a beautifully designed abstract strategy board game produced by Spin Master. 2 to 4 players take on the roles of Greek Gods and move around the grid, gradually building the city up with the aim being to be the first player to stand on top of a third story building.

Santorini’s gameplay is easy-to-follow for all abilities.

Due to the variable player powers given by the 30 Gods/Goddess cards, every game you play will be different, making this game an excellent investment.

Spin Master has provided an eye-catching raised board with beautifully illustrated God cards, neat worker miniatures, and high-quality building tiles. The game is ranked near the top 100 board games of all time and one of the greatest strategy games we’ve played.

Santorini is very similar to Hive because there is a mix of variable player power pieces and showdown style of gameplay. It is also a great alternative to Chess yet provides more visuals to entice younger players into the world of strategic board games.

Number of Players: The game is for 2 to 4 players.

Ages: Recommended 8-Years and Over

Main Objective: To move one of your workers onto the third level of a tower.

Why We Love it: The need to anticipate other players’ moves makes the game exciting, as well as a great way to hone analytical skills. It’s a brilliant way for kids and adults to work on their critical thinking, and we love the forward planning, speed, and various ways to play this game.

A Brief History of Santorini the Board Game

Santorini was initially released in 2004, and although it had a fairly popular following, it never really entered the mainstream. In 2016 this changed due to a newer version of the game being brought out.

The two games are similar, but the more recent version has significantly better component quality.

The re-release of Santorini was the most successful Kickstarter campaign ever based in Alberta. The success was thought to be down to the superior quality of the game’s imagery, including the enhanced cartoon-like look of the game.

Kickstarter is currently in the process of releasing Santorini as an App Game for GooglePlay and Apple.

What You’ll Need to Play Santorini

To play Santorini, all you will need is the board game.

Inside the board game box, you will find: 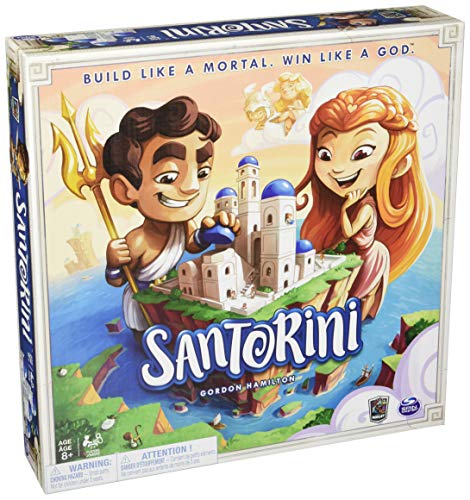 Spin Master Santorini (Multi) Strategy Board Game
$39.70
Buy Now
We earn a commission if you click this link and make a purchase at no additional cost to you.

How to Play Santorini

The game’s objective is to get one of your workers on top of a 3 story tower; opposite players can try to block this, so forward planning is crucial to prevent this from happening.

Setting up The Game

Setting up Santorini takes no time at all. Grab the clip pedestal from the box and place it smaller side down on the table. Then using the tabs on each side of the pedestal, snap the board into place. Each player will then grab their workers and God power cards.

For 2 to 3 players, each player will grab a set of 2 same color workers and a God power card.

Next, position both of your workers onto the board. Player one, or team one, goes first, followed by the second team or individual players. Now, it is time to play Santorini!

The rules of Santorini are simple. Each turn consists of only 2 steps:

Move one of your workers into a neighboring space; this is any space next to where your worker already sits that is not blocked by another worker or building.

Workers can move forwards, backward, side to side, or diagonally one space. If you cannot move in any direction, then you forfeit the game.

Once you have moved a worker, you must then construct a building level that is adjacent to the worker you’ve moved. If you are at 3 stories of a tower, place a dome on top instead of another story.

The winner of the game is the first player, or team, to have constructed a 3 story tower.

How you play, Santorini, depends on the God power card you have. But, generally, you will move a worker to any of the 8 spaces surrounding it, providing that these are not occupied.

When moving, a player can move on the same level, up a level, or down. You can’t move up more than once. You must build with the worker you have just used, with the appropriate block for that level.

A tower has four components, with the last piece being the dome. Once the dome is placed, you can no longer put a worker here or continue building on this site.

The winner is the player who can get their worker to the top of level 3 first.

God power cards come in two categories: simple and advanced. It is best for every player to be playing at the same level. Simple cards have a purple flower, and advanced cards show a blue swirl.

For 4 players split into two teams of 2, grab a set of colored workers, and each player takes their own individual God power cards. God power cards are required for 3 or 4 players, but not when playing against another player.

You will find what each of the 30 different God power cards do by looking at the explanations in the instruction booklet that comes with the game. Some offer a player great chances, such as the Chronus Card which allows you to immediately win the game once 5 towers are on the board.

The Hestia Card allows you to build twice on your turn, and the Atlas Card lets you build a dome on top of any level. Some cards help to advance your gameplay, while others make play more challenging for your opposition.

Can Children Younger Than 8 Play Santorini?

For the most part, Santorini is a basic game to play, and the game does a great job finding the perfect balance between simplicity and strategy. Each turn relies on only 2 decisions, although there is a good amount of strategy if you choose to play it more seriously.

Children younger than 8 can play this game well with help and advice, and we believe it could even be considered educational as well as great fun for kids.

Is Santorini a Party Game?

While Santorini is undoubtedly good fun, it may not be the best board game to bring out at parties. For some great outdoor party games, check out our BBQ party games ideas post.

How Much Strategy is Involved with Santorini?

Santorini is basically like Chess in that you can plan ahead as many moves as you want to and make it as challenging for your opposition as you can/want to. Every move you make can have different outcomes, so it is best to consider 3-4 steps ahead of each move.

Or, you can just go with the flow!

There are several games on the market today with similarities to Santorini, although the most appropriate alternative may be Hive. Hive is like a combination of Chess and Go, and the same could be said for Santorini.

The object of Hive is to surround the opponent’s Queen Bee while at the same time attempting to stop your opponent from doing the same. Hive is suitable for 2 players and takes around 20 minutes to play.

The Duke is also a good alternative to Santorini because this is ultimately a showdown between 2 players. With Duke, you’re either pushing forward, or you’re protecting your investments.

For a longer and more challenging board game, why not consider Scythe? This game is suitable for up to 7 players, aged 14 upwards, and takes around 115 minutes to play.