If you’re looking for the perfect summertime activity that anyone can take part in, then check out some of our favorite Scavenger Hunt games for some foraging fun.

Although some pre-planning will need to go into preparing a scavenger hunt, if done correctly, then you’ll have a group game everyone will have fun playing.

It may also surprise you that there are different versions of a scavenger hunt you can play depending on players’ age and circumstances in playing.

With this in mind, we have listed our 15 favorite examples of scavenger hunt games to play with kids, teenagers, and even adults.

What Are Scavenger Hunt Games?

Scavenger Hunt games are similar to an organized treasure hunt, with players getting a list at the start of the game of items they need to find within a time limit.

You can also hide Scavenger Hunt items in various locations before the game starts, or you can leave this part alone and leave it up to the players to find the items themselves, which are within nature itself.

Players need to find simple items to gather or clues that lead them to the next item for more challenging scavenger hunts.

How To Play Scavenger Hunt Games?

Scavenger Hunt games get played either as individuals, pairs, or larger groups of 3 or more depending on the number of players you have.

The rules of the game are the same no matter the number of players that are taking part, however.

You can play Scavenger Hunt games either with a time limit or until the first individual or team completes their given list or manages to solve the last puzzle.

Supplies That You Might Need For Scavenger Hunt Games?

Most of the supplies that you’ll need to play a Scavenger Hunt game does largely depend on which version you are playing, but make sure you have the following:

If you are a fan of ‘Minute to Win it’ games and play them regularly then you should already have certain supplies already so try to use them if you can.

Time to Play: At least 30 minutes.

Stay-At-Home Scavenger Hunt in a nutshell:

Hide various objects around the house. Write out a list of the hidden goods, making them as vague as possible. For example, write down ‘something that’s blue’. Players will need to attempt to find the objects which match the descriptions. The player who finds the most objects wins.

Objective: Be the first player or team to find the clues and solve the problems. Collect items, and then solve the final challenge using the items gathered.

The Scavenger HuntSeek ‘N’ Build comes with different challenges for players to complete. Once completed, they get rewarded with a specific item that they collect throughout the game. Use these items to complete a pre-determined final task, such as making the best drum. 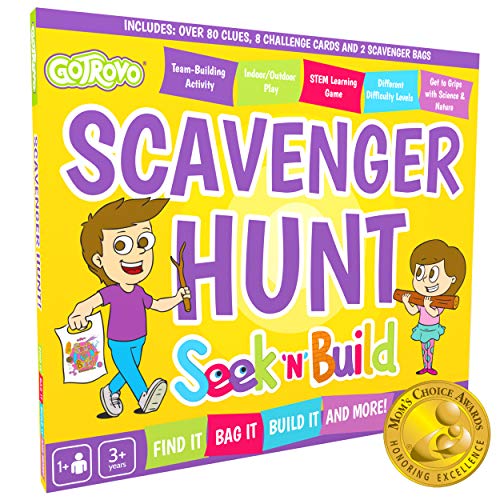 Scavenger Hunt Game for Kids
$12.50
Buy Now
We earn a commission if you click this link and make a purchase at no additional cost to you.

Objective: Working as a team, collect the stolen pieces to gain clues so that the team can solve the mystery.

Before the game begins, place the pieces in random hidden locations for the players to find. Walking Talkie Scavenger Hunt is a spy game, so players work together and communicate with one another to find the pieces. Once they are all found, then they use the findings to solve the spy mystery.

Tip: This game comes with both indoor and outdoor cards so that players can play this game either way.

Objective: Find and decipher the clues to work out what the mysterious code is at the end of the game.

Hide a variety of coded messages around the area, and give players hints where to find them. Once they are all found, then players will need to crack the code to work out what the hidden message at the end is. First player to work it out wins the Scavenger Hunt.

Objective: Find what is on the Scavenger Hunt list and draw a picture of it once located.

Art Scavenger Hunt in a nutshell:

Create a list of objects that would be interesting for players to draw, such as nature. Task all players to draw a picture of each thing that’s on the list. Winner is the person to draw whatever is on their list first.

Objective: Read the cards out and task toddlers and younger kids to complete the challenges on the card.

Read out the Toddler Scavenger Hunt card, there will be a statement written such as ‘can you find a hat?’. Time the player to see how long it takes them to complete the challenge. If playing with multiple players, either the quickest wins or the player who completes the most challenges. 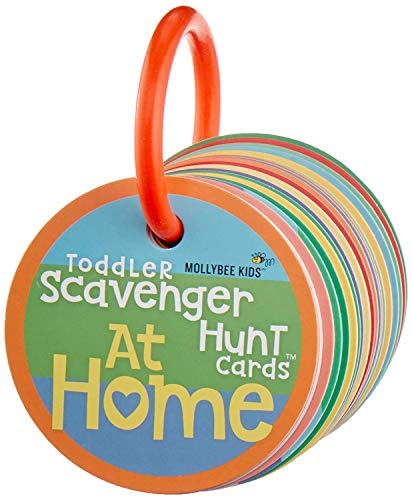 Mollybee Kids Toddler Scavenger Hunt Cooperative Card Game at Home
$12.99
Buy Now
We earn a commission if you click this link and make a purchase at no additional cost to you.

Objective: Collect objects which match the colors on a specific list.

Color Scavenger Hunt in a nutshell:

Make a list of various colors and hand them out to each player. Players need to find an object which matches the color on the list. The first player to complete their list wins the game.

Objective: Complete the various movement tasks that are on the given list.

Movement Scavenger Hunt in a nutshell:

Hand all players a list with tasks to complete, examples being ‘find something to jump over’ etc. The first player or team who manages to achieve everything on their list first is victorious.

Tip: If all players own one, have them record themselves completing each task on their smartphone.

Objective: Collect different items found in nature before the other players or teams.

Nature Scavenger Hunt in a nutshell:

Arrange an area outside to plan the scavenger hunt in, and create a list of nature for players to find. Have players collect a sample of everything that is on the list. Player or team to complete their list the quickest wins.

Objective: Collect and gather winter-related collectibles in the shortest amount of time.

Winter Scavenger Hunt in a nutshell:

Make a list of various things that players can only find in winter or the snow. Task all players to attempt to find the things on their individual list. Fastest to complete their list wins.

Objective: Spot everything football-related on a list before the end of a football match.

Football Scavenger Hunt in a nutshell:

Make a list of things that commonly happen throughout a football match, such as a touchdown or a field goal. Every time something happens that is on the sheet, tick it off.

Tip: Play this game while watching multiple matches to see which game is the quickest to complete the list.

Objective: On a car or road trip, be the player to spot the most varieties of cars.

Before you begin, grab a pen and paper and write down as many different models of cars as possible. While traveling, players will need to shout out when they’ve spotted a car make and/or model that is on the list. The first player to spot the right car gets a point added next to their name. Player with the most by the end of the trip wins.

Tip: Alternatively, only have 1 car make and model for players to spot, with the player spotting it the most times in 1 trip winning the game.

Objective: Collect different items from another country when you’re next on vacation.

Vacation Scavenger Hunt in a nutshell:

Make a list of different sites or country-specific items that you can find when on vacation. Split up into teams, and attempt to either collect the items or take photos of whatever is on the list. The winning team is the one who completes their list first.

Objective: Complete a shopping list that has various clothes on it by searching through local thrift stores.

Before you begin, decide on an outfit that everyone must create, which contains a hat, top, pants, shoes, and an accessory. Everyone must visit local thrift stores to create the best, most whacky, and cheapest outfit possible. Set a time limit of 60 minutes to complete the task, meet back at the end of the 60 minutes. Try your outfit on and decide who has done the best based on the predetermined metrics.

Objective: Find the oldest or most obscure item from a yard sale.

Track down a local yard sale and decide what players need to find. Good ideas are to find something old etc. Players have 30 minutes to find and buy as many items for sale that fit the requirements. After the 30 minutes are up, decide who has purchased the best item.

So there you have it, some of our favorite Scavenger Hunt games for you to try with your friends and family to make any large group event or day out funner than it was before.

If your kids love the idea of playing a scavenger hunt, but you’re also looking for more group game ideas, check out our guide to camp games for small groups for some more games they’ll enjoy.

So even younger children aren’t left out of the fun as well, why not grab ideas of games they can play by checking out some group games for preschoolers we recommend.

Weather not on your side this summer? Not to worry, as we also have picked out the best indoor group games for kids that will surely keep them busy.