There is a tonne of different types of UNO you can play, but once you learn the UNO Flash rules, you’ll agree that this is the quickest and craziest version of them all.

UNO Flash adds in a robotic game unit where you store the cards and act as the central point in which players play the game.

If you’re a fan of games such as SushiGo Party (see our SushiGo Party rules guide) and Aggravation (Aggravation rules) that has elements of unpredictability and encourages fast-paced gameplay, then UNO Flash could potentially be the version of UNO for you.

So if this version of UNO sounds like more than just a flash in the pan to you, read our guide to the UNO Flash rules, including full game instructions and tips below.

What Is UNO Flash?

A modern spin on the classic version of UNO, UNO Flash includes a game unit that completely changes how you play the game.

Fortunately, the same great gameplay found in classic UNO or even Spicy UNO is still a part of the game, but with the Flash edition, the gameplay gets mixed up at any point.

The game randomly changes directions while playing, meaning that players need to keep their focus, or they can quickly lose out.

Who Can Play It: All ages, but the fast-paced gameplay is most suitable for children.

Length of Play: 10 minutes per game.

Main Objective: Be the first player to reach 500 points across multiple rounds. Each round ends when 1 player manages to get rid of all their cards.

Why we love it: If you’ve ever played UNO before, then you’ll know how the fun gameplay that is easy to understand can be so easily adjusted into many different versions. In particular, Flash is an excellent spin-off as it appeals towards kids, yet older kids and adults can still have great fun.

The most crucial part of UNO Flash is the game unit needed to play, as you could expect.

If you were to purchase the official UNO Flash kit, it would include: 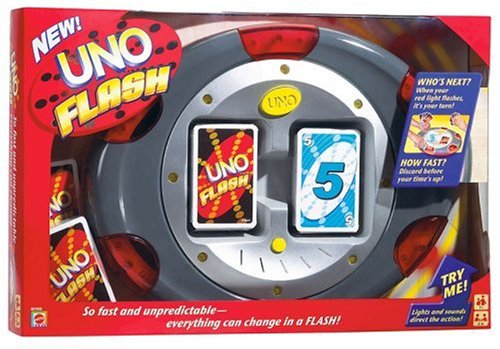 UNO: Flash Game
$99.99 $69.37
Buy Now
We earn a commission if you click this link and make a purchase at no additional cost to you.

If you’re used to other UNO games such as UNO Spin or UNO Blast, you’ll notice that there are special cards in Flash that you may not have seen before, but we will cover what these are. UNO: Spin
$34.99
Buy Now
We earn a commission if you click this link and make a purchase at no additional cost to you.
Our Pick UNO: Blast Buy Now
We earn a commission if you click this link and make a purchase at no additional cost to you.

How To Set Up UNO Flash.

UNO Flash does need a little bit of setup before you can begin playing, mainly to make sure that the UNO Flash device works appropriately for the game.

You need to start by deciding how speedy you would like the game by setting the speed switch on the Flash unit’s bottom. Choose either 4-second intervals, 6-second intervals, or do not have any time limit whatsoever.

Don’t forget to apply batteries and switch on the device as well.

Decide who shuffles the deck of cards in any way that you would like and have that player deal the rest 7 cards each.

There are 2 slots on the UNO Flash unit, one is for the draw pile where the remaining cards get placed. The other is for the discard pile used when the game begins.

Turn a card from the draw pile over onto the discard pile to get it started.

The UNO Flash unit has 6 buttons on the side, one for each player. Whoever is playing presses 1 of these buttons tells the unit how many players are in the game.

If you need to take a break from UNO Flash at any point, press the yellow play/pause button, which is between the 2 card piles, to stop the unit.

Reset the unit at any point by holding down both the play/pause button and the slap button simultaneously for about 3 seconds.

And now you know how the UNO Flash unit works, the proper game can begin.

UNO Flash works by lighting up each player’s button when it is their turn to lay down a card. So not only are players competing against each other, but they’re also against the clock too.

This is randomly done, so when you’ve pressed play, anyone can start. So be sure everyone has had a chance to organize their cards to make it slightly easier.

The game will randomly choose who lays down a card next, so everyone needs to be ready at all times if they want to win the game.

How to play Uno Flash.

Other than using the UNO Flash unit, the gameplay is the same as other more conventional versions of UNO.

When it is a player’s turn, they must place a card on top of the one on top of the discard pile that is either the same number or color as the previous card.

If that player cannot play a card, they have to pick one up from the draw pile. If they have time and the newly drawn card matches, they can play it, however.

Once a turn is over, the player presses their player button to tell the machine that the game can move on. Be warned that due to its randomness, players can get picked multiple times in a row.

If a player is unable to press their player button in time, a buzzer will go off to indicate that their time to take their turn is up. If this happens, the offending player must draw 2 playable cards.

The first player to get rid of all their cards first wins the round… but of course, be sure that everyone says ‘UNO’ on their last card like they do in all other UNO games!

Like in other versions of UNO, the wildcards are a key part of the game, and UNO flash is no exception to this.

You can only play action cards if they match the type or color of the top card on the discard pile unless otherwise stated.

If a player is a victim of an action card, they must still be sure to quickly press their player button or will have an additional 2 card penalty for being too slow as well.

The action cards in the Uno Flash rules include:

Related: What does Shuffle Hands mean in UNO

As UNO Flash is over relatively quickly due to how fast the machine can be set, the game gets played in multiple rounds with a scoring system attached so you can maximize gameplay.

Points get awarded to the player who finishes their hand first. Scores get worked out depending on what the other players have left in their hands.

Points get scored as follows:

Calculate the score after each and add that to the winning player’s total until a player manages to get to or exceed 500 points, who wins the game.

Are there any UNO Flash rules that you can adjust to make the game easier for kids?

As stated, you can adjust the speed or turn off the UNO Flash device so you can play a game without the restrictions of a time limit.

Also, you can get rid of the scoring system altogether if you find you or your kids not enjoying the calculating aspect of the game. Simply tally up the number of wins instead.

How do you get the UNO Flash unit back to normal after the slap card gets played?

Simply press the play button that is flashing for the game to resume.

Note that if a player accidentally presses the play button instead of the slap button when a slap card gets played, then the chance is gone, and play continues as usual.

If you’re a fan of UNO but are looking for a fresh alternative to the much-loved family game, we hope the UNO Flash becomes an option worth considering for you.

But if it’s other card games that you’re interested in trying, check out our extensive guides to the Racko rules and Bohnanza rules for more card games ideal for the family.

And if you would like some more kids games designed to keep the little ones entertained, look no further than our guides to the Operation game rules or teach them how to play Candyland.