If you’re someone who likes card games that are quick-paced, unpredictable, but also lots of fun, then have a look at the UNO Attack rules for a game that could suit your needs.

UNO Attack takes the classic concept of UNO and adds in a wacky card launcher that acts as the game’s niche.

Younger players, in particular, will enjoy the ‘Attack’ part of the game, with the mechanism that shoots cards at the group when they’re unlucky enough to have to pick cards up.

Like any other form of UNO, players compete to be the first person to get rid of their cards, not forgetting the classic rule of shouting ‘UNO’ once a player is on their last card.

If you’re looking to find out more about the UNO Attack rules, including helpful tips, then continue reading.

What Is UNO Attack?

UNO is one of the most versatile card games, with its base gameplay widely adapted into different versions such as UNO Attack.

If you’re a fan of card games such as Racko (see our Racko rules guide) or are already familiar with the Phase 10 rules, then UNO should be easy to learn.

Main Objective: Get rid of your cards and score points. The first player to score 500 points across multiple rounds wins the game.

Why We Love It: If you’re not a fan of the usual game of UNO as you find it too slow, UNO Attack solves this problem. Although more for kids, there’s a lot to enjoy for adults and adds an extra edge to the standard round of UNO.

What you’ll need to play UNO Attack is a deck of UNO cards and the special machine that spits cards at players.

Luckily everything that you need for UNO Attack comes in a handy set, which includes: 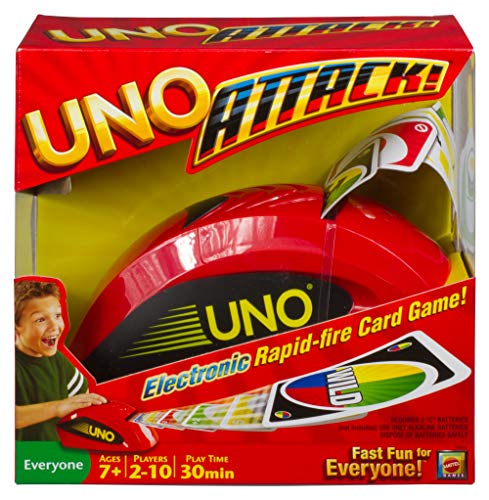 UNO Attack! Game
$36.95
Buy Now
We earn a commission if you click this link and make a purchase at no additional cost to you.

Some of these cards you’ll be familiar with if you’ve played another version of UNO before, like Spicy UNO or UNO Flash. But if you’re not familiar, keep reading as this will cover all of the UNO Attack rules.

How To Set Up UNO Attack.

Start by shuffling the cards and dealing out 7 per person.

The Attack Card Launcher needs configuring before play begins. Ensure that batteries are in the launcher and turn it on.

Place 1 card into the top of the launcher as the discard pile, open the launcher and place the rest of the deck inside the UNO Attack launcher.

Ensure that you or the other players turn the launcher to the player whose turn it is while playing.

Be warned, cards do not shoot out every time a player presses the button on the launcher. Once you hear a ‘ding’ after pressing, that means it’s the next person’s turn.

After setting up the launcher and dealing out the correct number of cards, the game can begin.

Usually, the game starts with the player to the dealer’s left taking the first turn, but start any other way if you prefer, such as the youngest going first.

If a player cannot play a card, they must press the button on the launcher. This will randomly shoot out cards to the player, or sometimes no cards get shot out at all!

How to play UNO Attack.

UNO Attack gets played much in the same way as other versions, where players need to match either the number or color of the card on top of the discard pile.

If you or another player cannot play one of the cards, then the offending player must press the button on the launcher. Any cards that get spat out get added to that player’s hand.

Play gets passed to the left. Like in every other UNO game, if a player has 1 card left in their hand, they must shout UNO to signify this to the other players.

If a player doesn’t do this and gets caught, they must press the Uno Attack Launcher 2 times.

As soon as a player manages to get rid of all their cards, the round is over, and the winning player gets given a score to add to their overall total.

Games of UNO Attack are generally over fairly quick, so to get the most out of your games it’s a good idea to implement a scoring system to prolong gameplay.

Set the target total as 500 points. Every time a player wins a round, have the rest of the players reveal their remaining cards.

Tally up all of the numbered cards left in hands to give the winner a total, and write them down as a running total across multiple rounds.

Score special cards with the following:

Once a player has reached at least 500 points, then they win the game.

It’s worth being aware of what the non-numbered cards are and how they affect gameplay. These include:

Are there any UNO Attack rules which state that players have to play cards if they have the correct card?

This is ‘Reneging’ and is acceptable for players to do, but if they do so, then they must press the launcher as if they cannot go.

What happens if the cards from the launcher get stuck when shooting cards?

Any cards that are sticking out of the launcher after shooting need to be gently pulled out of the machine and added to the offending player’s hand.

It’s crucial to remove these cards as jamming can occasionally occur and damage the machine if left alone.

UNO Attack is definitely a card game worth knowing about as it’s a great spin on a classic while still staying true to the gameplay that everyone knows.

Be sure to check out other card games that we love, re-learn card games such as Go Fish or learn how to play Spoons for your next game night.

And with the weather starting to turn warmer, get your kids active by reading some of our guides to outdoor games.

Learn both the Crossnet rules and the Kan-Jam rules for examples of some family-friendly outdoor games ideal if you’re planning a barbeque or picnic soon.