Are you someone who loves slightly challenging card games? And would rather have a long yet rewarding battle with their pals to crown the winner?

If this sounds like you, then you may want to read about the Phase 10 rules.

Phase 10 is a game that rewards players who can hold their nerve, but also requires players to have a keen eye to notice opportunities when they arise.

Like any good Rummy game, forming melds is key. But when you can add your own cards to other player’s already formed melds, paying close attention to what’s going on around you can offer rewards.

Phase 10 shares elements of gameplay with Rummy games such as Five Crowns and Conquian. It also differs in several ways though, so that it becomes a unique game in its own right.

The key difference between Phase 10 and other versions of Rummy is that you have to complete 10 different types or match-ups in the game. The player with the lowest score after all 10 phases get completed is the winner of the game.

The game originally dates back to 1982 until game giants Mattel bought the rights to the game in 2010. However, the Phase 10 rules and same fun gameplay has stayed the same ever since its creation date.

Who Can Play It: Designed for all ages.

Difficulty: Easy, although harder for young kids to pick up as it can be a long game.

Main Objective: Become the first player to complete all 10 of their phases by turning their cards into melds, hence the name of the game. There is also the secondary aim of getting rid of all your cards first as well. Scores get given based on the remaining cards in the player’s hands, with the lowest score winning.

Why we love it: Phase 10 occupies that void between kids game that becomes too easy like UNO and Rummy games that are too complex like the Hand, Knee, and Foot card game. Anyone in the family can join and have great fun playing it, and games can also get really involved and tactical as well.

Phase 10 requires its own unique deck before playing – unfortunately you cannot use a standard 52 card deck for this game.

Fortunately, due to Phase 10’s popularity, the deck of Phase 10 cards that you need is widely available to purchase.

A deck of Phase 10 cards should include 110 cards made up of:

If you are also someone who really enjoys their card games, developers Mattell make Phase 10. As a result, they have sets available with both UNO and Pic Flip included as well. 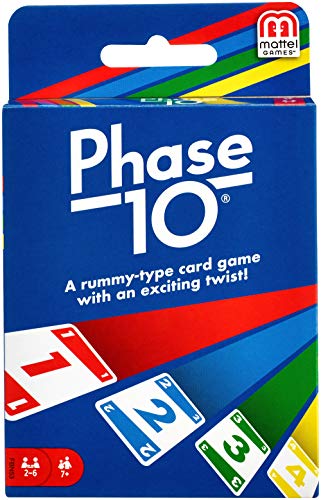 Phase 10 Card Game
$10.96
Buy Now
We earn a commission if you click this link and make a purchase at no additional cost to you.

One of the most frustrating things about card games is that the actual cards themselves are so easily ruined, but consider buying a card-carrying case to avoid that possibility. 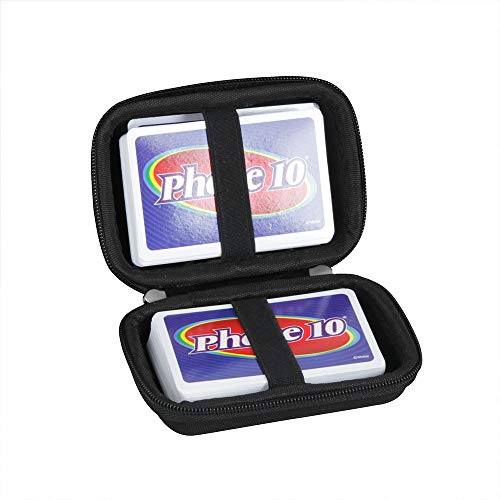 Hard Travel Case for Phase 10 Card Game
$10.99
Buy Now
We earn a commission if you click this link and make a purchase at no additional cost to you.

If you would like to play with more than 6 players, you can buy 2 Phase 10 decks and the gameplay still stays exactly the same as well.

Setting up Phase 10 is the same whether you are playing with 2 players or 6, and is easy enough so that kids will have no problems in setting up the game too.

Choose a dealer and have them shuffle the deck. The dealer then deals out 10 cards to each player, face down.

The remaining cards leftover in the deck get placed in the middle of all players face down and become the draw pile. Turn the top card of this deck over and place it next to it to become the discard pile.

You play Phase 10 very like other similar card games, so if you are a card game veteran a lot of the aspects of this game will be familiar to you already.

You may have also noticed that the cards have the numbers 1-12, with there also being 2 of each card. This is important to note and we will cover that in this guide.

Once the dealer deals all the cards and set-up is complete, the game can begin. Play goes clockwise around the circle, so start the game with the player to the left of the dealer.

As stated, you play Phase 10 in phases, and you must play these phases in order. Players compete in the same phase at the same time. Everyone moves onto the next phase as soon as one player forms the meld for the current phase.

The phases are as follows:

Have a look at our FAQs if you need some extra information on runs and sets.

8 wildcards are available throughout the game as well. A wildcard acts instead of a number you may be missing to make a set or a run.

How to play Phase 10

Players take it in turns to play Phase 10, starting to the dealer’s left.

A player’s turn always starts by drawing a card from the top of either the discard pile or the drawer pile.

They then study their cards to see if they manage to form either the necessary run or set required of the phase that they are on.

If that player cannot make the correct run or set, then they end their turn by discarding one of the cards in their hands so that they keep 10.

If the player can make the correct run or set, then they can choose to ‘lay down’ the phase. That player lays the necessary cards face up onto the table for the other players to see, but they aren’t obliged to lay down even if they have the correct number of cards to do so.

Players can also include more cards in their set or run than they need to, just as long as the player meets the minimum card requirements. For example, if the player is on phase 4 that requires a run of 7, they can lay down a run of 8 or 9 and that will be fine to do.

Once a player has chosen to ‘lay down’ their cards to meet the requirements of the correct phase, they then need to get rid of the remaining cards in their hand.

Players get rid of the remaining cards by adding them to any of the hands laid down on the table, they do not need to add them to their own melds that they form.

As soon as 1 player gets rid of their cards, the round is over and the next phase can begin. Once the 10th phase gets completed, the game is over.

To work out who wins in the Phase 10 rules, scoring gets calculated after every round based on the cards that remain in each player’s hand at the end of the round.

The end goal of the game is to have the lowest score, so it is an idea to get rid of the higher value cards as quickly as possible.

Calculate each player’s score at the end of each round and keep tally throughout the game. Whoever has the lowest total score after the 10th phase finishes wins the game.

Is there anything in the Phase 10 rules about the color of the cards?

The color of the cards doesn’t actually mean too much in the Phase 10 rules, for example in regular gameplay players do not need to form melds with cards in the correct colors.

They are mainly used so that it’s easier to keep track and count that you have the correct number of cards to play.

However, if you and your pals are looking to increase the difficulty, you can definitely play a version where you can only form melds with cards of the same color.

What do you mean by the terms melds, runs, and sets?

If you’ve ever played any form of Rummy before, then melds, runs, and sets are exactly the same as they are in those games.

For those who haven’t played them, however, we shall explain what these terms mean.

Melds is the term used to describe the collection of sets and runs that players form.

What is the highest score possible within the Phase 10 rules?

After doing some calculations, we can confirm that the highest total score that a player can achieve while playing Phase 10 is 649.

However, for this score to happen you would have to have some pretty disastrous luck while playing. But if it does happen, then at least you’ll have plenty of room for improvement.

Phase 10 is definitely a card game that can give you a bit of a challenge without it being too hard or frustrating for young or new players to pick up.

If you are looking for similar games, especially ones that have their own unique decks and rules to follow then we have got you covered.

Have a look at the Racko rules, a unique yet vintage game of cards unlike any other, or check out how to play Spoons for a quick card game that is easy to learn.

If you love forming melds when you play cards but want to up the difficulty, then read the Tripoley rules as this game includes a poker element to forming melds which may intrigue you.