If you’re after an alternative to UNO but still follow the same competitive gameplay that players will already be familiar with, learn the DOS rules for a great card game substitute.

Mixing together ideas from UNO and even some of the Phase 10 rules, DOS focuses on numbers rather than colors throughout the game.

In terms of difficulty, DOS would be best described as lying between UNO and Phase 10, making it a great transitional game if you’re looking to up the difficulty with card games.

If you would like to know more, then this guide will teach you how to play DOS, explain the differences between DOS and UNO and also tell you how to set up the game.

DOS can be seen as the sequel or successor to UNO and follows a lot of the same ideas as the Classic UNO rules.

Player’s compete to get rid of their cards just like in UNO, and like in Spicy UNO, there are different rules added such as new Wildcards for players to achieve this.

The most important difference between UNO and DOS for players to remember is that they’ll need to shout ‘DOS’ when they have 2 cards left instead of 1.

Main Objective: Be the first player to reach 200 points across multiple rounds to win the game.

Why We Love It: Slightly differing from the game that it originates from, DOS is basically UNO turned up a notch. DOS includes special wildcards that completely change the game as you play.

Like other card games, to play DOS, you’ll first need to get yourself the right gear.

This DOS set comes with a collectors tin which will protect your cards nicely, and within the tin, you’ll have: 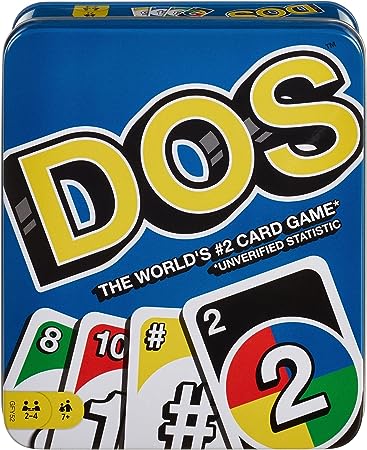 DOS Card Game [Amazon Exclusive]
$9.99
Buy Now
We earn a commission if you click this link and make a purchase at no additional cost to you.

Check out the waterproof edition DOS Splash as well so you can play in the pool in summer and not worry about your cards getting ruined.

How To Set Up DOS

Have all players draw cards, with the player who draws the highest number card being the dealer.

Shuffle the deck with all the cards, and hand out 7 cards to each player.

Put the deck face down in the middle and draw the top 2 cards; place these 2 cards face up next to the deck in 2 separate piles to form the Center Row.

Leave a space next to the cards to act as the discard pile for players to put their old cards during the game.

Players use the cards that are in the Centre Row throughout the game to get rid of their cards, and as these are randomly determined, it means that each round is unique.

The game starts with the player who is sitting to the left of the dealer.

Similar to UNO, in DOS, players compete to get rid of all their cards, done in 1 of 2 ways:

The starting player plays one of the cards in their hand or picks up a card from the draw pile if they cannot go.

Play continues to the left, with each player taking their turn one at a time.

How to Play DOS

Players compete to be the first player to get rid of all their cards, but players need to shout ‘DOS’ when they have 2 cards left instead of UNO’s standard 1 card.

If a player manages to land a Double Color Match, all the other players must draw a card from the draw pile as well.

Player’s can also play 1 set of cards for every card that’s in the Center Row.

So if there are 2 cards in the Center Row, players can place as many cards from their hand as possible on both sets of cards.

There are also a couple of DOS wildcards that players may see while they’re playing, which are the following:

As soon as a player gets rid of all their cards, the round ends, and scores are added up.

To win at DOS, a player needs to accumulate 200 points across numerous rounds.

A score gets awarded to the winning player depending on the cards that the other players have in their hands at the end of the round.

Use this guide to work out how many points each card left over is worth:

How is DOS different from UNO?

The main 2 differences between DOS and UNO are that there are 2 game piles used during gameplay in DOS, and you match numbers rather than colors in DOS as well.

Can you play DOS with UNO cards?

You wouldn’t be able to play the full version of DOS with UNO cards as UNO doesn’t include the necessary WIldcards that you’ll need.

However, there are plenty of other games to play with UNO cards for you to try out instead.

What is the discard pile used for in DOS?

In some versions of DOS, players can discard cards in their hands and draw new cards to make the game easier for newcomers.

You don’t need to play with this rule, and it is there just to make the game easier.

Fortunately, there is no shortage of alternative UNO games you can play, and we’ve taken it upon ourselves to let you know about each one with our informative guides.

Each one follows a similar premise to UNO but with a quirky twist to keep things interesting for your friends and family.

All other UNO games:

Read all the articles (26) written by Jack Mcgachie