What is Spec Tennis? Ask that question to any number of its fans and chances are you’ll get a range of different answers in response.

Some will tell you that it’s an innovative blend of pickleball and regular tennis, played with platform tennis paddles on a pickleball court.

Others will tell you that it’s a game best played in doubles as you work together with your partner to score more points than the other team.

Others still will tell you that it’s one of the fastest-growing paddle sports in America, offering a welcome alternative for those looking for something different to do out on the court.

The truth is that it’s really all three of these things and then some. In today’s guide, we’ll explain exactly what Spec Tennis is, how to play it, and all the rules you need to know to enjoy this increasingly popular game for yourself.

What is Spec Tennis?

If you love nothing more than spending your time outdoors playing games but find the pace of traditional pursuits like horseshoes is just a little too slow for your liking, then Spec Tennis may just be the thing for you.

A quick, high-energy paddle game, the sport was invented by Californian professional tennis coach Nate Gross after experimenting with different ways to make the most of his local Pickleball court.

Finally settling on a winning combination of paddle, ball, and gameplay rules, Nate settled on a game that has much in common with traditional pickleball, albeit with modified rules to make it a much faster, free-flowing game.

Number of Players Required: 2-4. Though Spec Tennis can be played as a singles game, it’s much more fun when you partner up for a game of doubles.

Who Can Play It: All ages, though players of similar abilities will have a better experience playing together.

Main Objective: Score enough points to win a game, enough games to win a set, and enough sets to win the match.

Why We Love It: It’s a simpler, speedier version of other racquet and paddle games that’s not just a great way to sharpen your tennis skills but is also tremendous fun in its own right.

As a game that has its roots in pickleball, it probably comes as no surprise that the game is played on a standard 44ft x 20 ft pickleball court. This is the same regardless of whether you’re playing singles or doubles.

Equipment-wise, all players will need a quality platform tennis paddle like this best-selling model from Grandcow. You’ll also need a Wilson Orange Dot tennis ball, chosen by the game’s inventor because it’s much easier to control than the usual green dot ball used in pickleball. 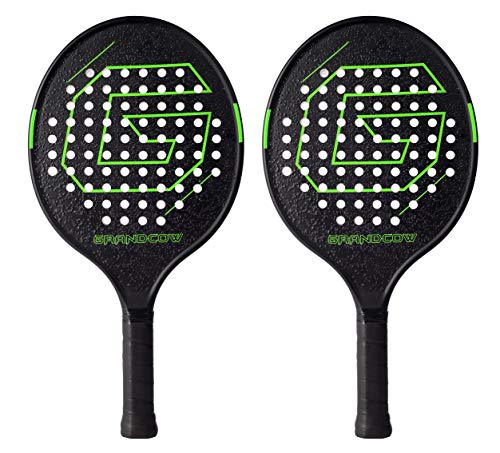 GRANDCOW Platform Tennis Paddle Racket Pro Carbon Fiber Power Lightweight Paddles Padel Racquet (Black-Green)
$124.99
Buy Now
We earn a commission if you click this link and make a purchase at no additional cost to you.

Much like Four Square or other court-based games, Spec Tennis can be played either indoors or outdoors. As long as you have an appropriate court, you’re good to go.

Your first task is to agree on which side of the court each team (or player) will occupy. In doubles games, teams should also decide among themselves which section of their half of the court they’ll defend.

In a singles game, the person who serves will serve every subsequent point until the end of the game.

In doubles, Spec Tennis rules insist that play adheres to a serving order as follows:

As in similar games, a ball must be served to the right square in order for it to count, so Player 1 on Team 1 serves to Player 2 on Team 2 and vice versa.

Once the ball is in play, both teams rally it back and forth until one team scores a point. While this is pretty standard in most paddle and racquet sports, what sets Spec Tennis apart from games like pickleball is that the usual “No Volley Zone” isn’t enforced.

This can often make for a much faster, more intense game.

How to Win at Spec Tennis

Points can be scored in any of the following three ways:

Scoring the most points is the name of the game here. The official Spec Tennis rules layout the following guidelines for deciding a winner.

If you’re playing casually, then you can always adapt these rules to whatever suits you best.

What Happens if the Ball Clips The Net but Lands Back in Play?

If the ball touches the net but then bounces into the right box, the game continues as normal.

What Happens if a Player Touches the Net?

If a player’s body or paddle connects with the net, they concede a point.

Do Players Have to Stay in the Same Part of the Court During Spec Tennis?

By now, you’ve learned everything you need to know to master the basics of Spec Tennis, but if you’re looking for something a little different, then there are a few alternatives you might enjoy.

If you’re looking for a similar paddle game, then look no further than pickleball. A combination of table tennis, regular tennis, and badminton, pickleball is the original game on which Spec Tennis is based and is a great way to learn ball control without the fast and furious nature of today’s featured game.

If what appeals to you most is the idea of a unique twist on a classic game, then you might enjoy Crossnet, a hybrid of volleyball and regular Foursquare that makes for a highly enjoyable multi-player game.

Last but by no means least, if it’s the quick pace and high impact of Spec Tennis you enjoy, you’ll no doubt find a lot to like about Kan-Jam, an innovative disc-throwing game for over 4 players that is rapidly growing in popularity across the United States.