If there’s one thing we love the most about the Foursquare game rules, it’s that they’re specifically designed to create a game that can be played just about anywhere, at any time, with minimal equipment necessary.

Unlike some outdoor games which, fun as they may be, take ages to set up and even longer to learn the rules, Foursquare requires little more than a ball, a couple of friends, and a straight-forward objective:

Eliminate your fellow players en route to the highest square by bouncing the ball into their square until they mess up and are eliminated.

Still not sure how to get a game underway?

Don’t worry, we’ve got you covered: Below, we’ll show you exactly how to play Foursquare, outlining the game’s easy-to-follow rules, how to set to up your squares, and explaining everything you need to know to enjoy this simple-yet-super-fun game for yourself.

Dating all the way back to the 1950s where it started as a popular activity during PE lessons in schools across the United States, little about Foursquare has changed in the past 70+ years.

Though it’s certainly much more popular (there is even a Foursquare world championships held each year in Maine), and though it’s spawned modern-day spin-offs like the hit game Crossnet, the rules and gameplay remain exactly the same, making it a game that people of all ages are familiar with and can play together.

Number of Players Required: 4+.As the name implies, Foursquare needs at least four players, though it’s often more fun with more. The first four players start the game with the rest lining up behind the fourth square. Once a player is eliminated, the first player in line takes their place.

Who Can Play It: All ages

Main Objective: Advance to the highest square by eliminating all of the other players. A player is eliminated when they fail to bounce the ball out of their square into another one.

Why We Love It: It’s quick, simple, and easy to play for kids and grown-ups of all ages. Best of all, it’s continuous nature guarantees hours of fun.

The true beauty of Foursquare is it requires very little equipment to play. All you need is a flat surface, a way to mark out the court, and a ball.

Official Foursquare balls do exist, and they can be a worthwhile investment if you’re planning to become a regular player as they offer just the right amount of bounce. These are the kind of balls used in official Foursquare leagues and tournaments, so if you’re thinking of getting competitive with it, it’s good to practice with an official ball. 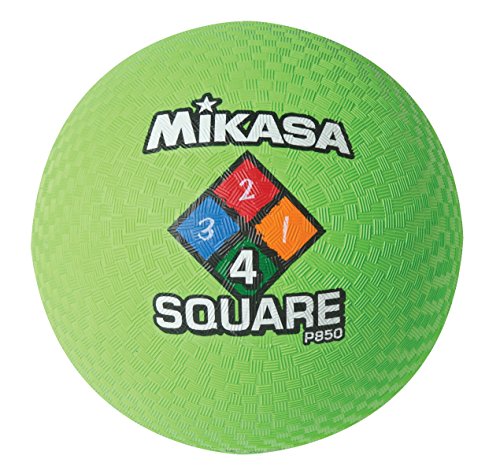 Mikasa P850 Foursquare Ball
$13.62
Buy Now
We earn a commission if you click this link and make a purchase at no additional cost to you.

Otherwise, casual players can play with any available ball that has a decent bounce.

If playing outdoors, sidewalk chalk can be used to draw your court, though anything from a ball of string or grass paint could work too.

How to Set Up a Game of Foursquare

Official Foursquare game rules dictate that the court should be one large 16ft x 16ft square divided into four equal 8ft x 8ft squares. Keep in mind that these rules are designed to make the game challenging for adult players, so if you’re playing with young children, you might want to significantly reduce the size of your court to whatever is appropriate.

Once you’ve drawn your court, each square should be numbered, moving clockwise from 1 – 4, albeit with numbers 3 and 4 reversed (so that it goes 1,2,4,3). As shown in the image above, this means that squares 1 and 4 should be diagonally opposite one another as should squares 2 and 3.

With the court set up, the first four players decide which square they’re going to start in.

The rest of the players form a line behind square one, being sure to give that player enough room.

For a serve to count, the ball must bounce once (but only once) in the server’s square. They can then strike the ball using any part of the hand (wrist to fingertip) to send it into the other player’s square.

The ball must then bounce once in that player’s square before they touch it.

Once the ball has been served from Square 4 to Square 1, it is considered to be “in play.” The Player in Square 1 (and all other players) can then serve the ball into any other square of their choosing.

The aim of the game is to serve the ball into an opponent’s square in such a way that they fail to hit it back out of their square in accordance with the rules.

When that happens, they’re eliminated from the game and a new person joins in.

How Players Are Eliminated in Foursquare

There are several ways that a player can be eliminated from Foursquare:

At that point, play continues until one person is left in the fourth square. That person is the winner of the game.

Can You Use Two Hands in Foursquare?

Yes. As long as both hands hit the ball at the same time, a two-handed hit is allowed. If you hit the ball with one hand and then the other, that counts as hitting the ball twice and means that the player is eliminated from the game.

What’s the Best Way to Win at Foursquare?

The same principle applies to Foursquare that applies to just about any game, whether it’s a game of darts or a round of golf:

That said, we do have a few tips you can put to work to help you improve your game no matter how much time you have to practice:

As fun as Foursquare can be, if you play any game for too long it can start to feel a little repetitive. Thankfully, there are scores of variations you can add to your game to keep things interesting.

One of our favorites is the simple game of “Airball.” All of the same Foursquare game rules apply with one addition:

Every time you touch the ball, both feet have to be off the ground.

Alternatively, why not try out “Cherry Bomb.” Perhaps the most popular Foursquare variant, this version gives each player one opportunity to use a huge spike to send the ball into their opponent’s square, usually yelling out “Cherry Bomb!” as they do so.

Finally, Around the World adds a unique wildcard to the game. At any given moment, a player can yell out “Around the World!” At that point, the usual rules are paused and each player must serve the ball to the player on their right until it has been in all Foursquares.

After that, normal play resumes and this simple yet seriously fun game continues.