If you are a fan of the classic game of Catan, these Catan Junior rules are a must-read! Introduce your kids to this fun game of strategy and economics with a lively pirate theme that they will want to play over and over again!

Catan Junior transports players into a tropical world to become pirates determined to sail around and build pirate lairs on different islands.

These islands produce resources which will allow them to build more lairs and ships along their travels.

Players can build, trade resources, and buy Coco tiles which provide them special actions to use. However, watch out for the Ghost Captain, who will prevent resources from being produced if he lands on one of your islands!

This Catan Junior rules guide will cover the following:

Learn how to play Catan Junior below!

What is Catan Junior?

Catan Junior is a kid-friendly version of the classic game of Catan. Players will collect resources, build lairs and ships, and even trade with others or the marketplace to get the exact resource that is needed.

Main Objective: Be the first player to build 7 Pirate Lairs!

Why We Love It: Catan Junior encourages children to plan ahead and properly manage their resources to win the game.

Everything you need to play Catan Junior can be found in the box: 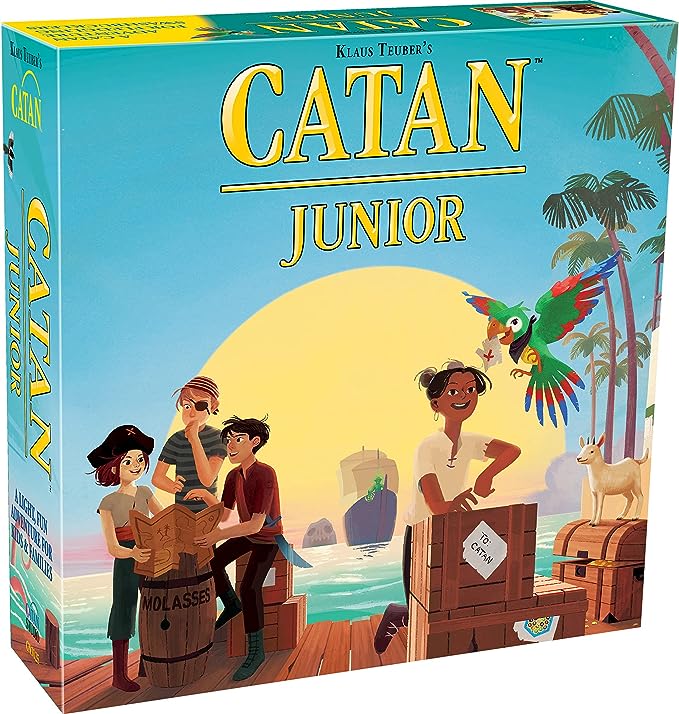 CATAN Junior Board Game | Board Game for Kids
$34.99 $27.99
Buy Now
We earn a commission if you click this link and make a purchase at no additional cost to you.

Follow these simple instructions to set up a game:

You are now ready to start a game of Catan Junior!

How to Play Catan Junior

Throughout a game of Catan Junior, you must collect the required resources to build both ships and pirate lairs. To obtain resources, you must have a pirate lair touching an island of that resource.

When the die is rolled, and the result matches the number shown on an island that one of your pirate lairs is touching, you are able to gain that resource! If you have two pirate lairs on that island, you would gain two resources of this type and so on.

Roll the die and reveal the value to all players. Every player who has a pirate lair on an island with this number, gains that island’s resource.

If you roll a 6, no one receives resources since there are no islands with a 6. Instead, the active player may move the Ghost Captain to an island of their choice, preventing players from collecting resources from that island until the Ghost Captain is moved again.

You may build, buy, and trade (in any order) at this time:

Refer to your building cost tiles to see what resources are required to build a pirate lair or ship. If you have the required amount and type of resources needed, you must discard your resources into the stockpile then proceed to build your pirate’s lair or ship where desired.

You must build your pirate lair and ships in the correct order. You will notice specific spots on the game board specifically for lairs and ships. You cannot place a lair on ship space or a ship on a lair space.

NOTE: You may not build ships through another player’s lair! You must find another way around it.

Also shown on the building cost tiles is an option to purchase Coco tiles. These tiles will help you significantly throughout the game!

Depending on which random Coco tile you receive, they allow you to either move the Ghost Captain, collect resources, or build a lair or ship for free! These actions must be completed immediately after the tile is purchased.

When the Coco tiles run out, you can no longer purchase them!

Cost to purchase a Coco tile: 1 cutlass, 1 molasses, and 1 gold.

Once during your turn, you may trade resources with the marketplace. You must replace the resource token you picked up with one from your personal supply, making the marketplace always have 5 resources.

The resource you place in the marketplace can be a resource of any type. However, if at one point during the game there are 5 of the same resources in the marketplace, they get removed to the stockpile and 1 of each resource is placed just like it was at the start of the game.

Another option for trading is to trade with any stockpile. Discard 2 matching resources to pick up 1 resource of any type.

For experienced players, you may also trade with other players. You can ask for a type of resource in exchange for one of your resources that they may be interested in.

NOTE: You can only trade with players if it is your turn. Players cannot trade with each other if it is neither of their turns.

If you are ever the player with the most Coco tiles, you have the privilege of building one of your pirate lairs directly on Spooky Island!

If at any time another player has more Coco tiles than you or if they are tied with you, you must remove your lair, and the new player gets to place theirs on the island instead. This lair does not need to be connected to any of your ship routes.

The lair on Spooky Island will count as 1 of your 7 lairs that need to be completed to win the game!

How to Win Catan Junior

To win a game of Catan Junior, you must be the first player to build a total of 7 pirate lairs!

How similar is Catan Junior to the original Catan game?

The two games are quite similar. The most drastic changes are the sizes of the game boards, the use of tokens instead of cards, and the overall theme.

In Catan Junior, you play as pirates building lairs and ships along islands. In the original Catan game, you play as settlers building roads, settlements, and cities on newly found land.

What happens if one of the resource stockpiles completely runs out?

If this were to happen, all players would discard all of that type of resource out of their personal supply to make the stockpile full again!

When you move the Ghost Captain using a Coco tile, can you also gain 2 resources from the island you placed him on?

Yes! The “Ghost Captain” Coco tile says it can be used as if you had rolled a “6,” so you would treat this tile the same way.

If you enjoyed reading about Catan Junior, check out these similar game guides (if we have covered them):