If you’ve ever wanted to purchase multiple properties as a T-Rex or toy duck, this game is for you! This Monopoly game is simplified into a fast-paced kid-friendly edition. Read on to learn all the Monopoly Junior rules and gameplay instructions.

Since 1990, youngsters can experience the popular Monopoly board game. The objective is still the same, but the rules are easy for kids to learn!

This Monopoly Junior rules guide will cover the following:

Read on to learn how to play Monopoly Junior.

What is Monopoly Junior?

Monopoly Junior is a simplified version of the traditional Monopoly board game designed especially for children. Players take turns purchasing properties and paying rent on occupied spaces to collect the most money.

Main Objective:  Be the player with the most cash collected by the end of the game to win!

Why We Love It: This is a youthful take on a classic board game. Kids of all ages enjoy playing Monopoly Junior. I play this game at home with my sons, ages 3 and 7.

A Brief History of Monopoly Junior

The classic Monopoly Game, developed during the Great Depression in America to teach finances, went into production in 1934. Parker Brothers originally manufactured the board game, and today Hasbro Gaming sells the newer editions of the game, including Monopoly Junior.

Monopoly Junior was released in 1990, and there are numerous kid-friendly editions of the game, including the Disney Princess edition, Dinosaur, Trolls, and Peppa Pig editions. 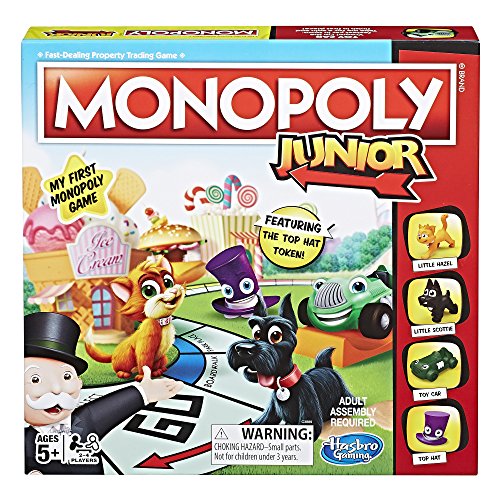 Monopoly Junior
$16.99
Buy Now
We earn a commission if you click this link and make a purchase at no additional cost to you.

Set up the board in the middle of your playing area. Shuffle the bills and Chance cards and place them in their designated places on the game board.

The four characters include:

Decide which player will be the banker, and distribute the following amounts of money to each payer:

Players position their tokens on the Go space to begin.

The youngest player goes first by rolling the die. Gameplay continues moving to the left.

Roll the die and move your token to the number of spaces indicated from the roll.

In this game, you will always move forward around the board, and every time you pass or land on Go, you collect $2 from the banker.

Where did you land?

For instance, if you are Little Penguin and land on a property owned by T-Rex, you must pay him the amount shown on the property.

If you land on your properties, you don’t have to do anything.

If you land on the Ferris Wheel space and the Roller Coaster, which are owned by the same token, you must pay double the rent shown on the properties to the owner.

Chance cards can be positive or negative experiences, such as claiming a free space on the board or paying a fee to the bank.

You can get out of jail on your next turn by paying $1 or use a Get Out Of Jail Free card if you have one. You can roll the die after being released from jail, and your turn continues as usual.

While in jail, you can still collect rent from other players who land on your property.

Your turn is over after following the steps indicated on the space you landed on. Now, the player to your left rolls the die and follows the steps accordingly.

For an added challenge, try playing Monopoly Junior with these additional rules:

How to Keep Score in Monopoly Junior

The game ends when a player is forced to declare bankruptcy. Bankruptcy occurs when someone does not have enough money to pay rent, buy property, or complete Chance card penalties.

Once a player becomes bankrupt, the game ends, and the player with the most money wins!

What age is Monopoly Junior for?

Monopoly Junior is recommended for children ages five and up. With some assistance from a grownup, younger children may also be able to play.

What is the difference between Monopoly and Monopoly Junior?

The traditional Monopoly game is much more involved than Monopoly Junior. For instance, in Monopoly, players buy, sell, and pay rent on properties of varying values using standard dollar bills.

Monopoly Junior only uses single dollar increments, and the board features kid-friendly properties such as an ice cream parlor, aquarium, and pet shop.

Can a 4-year-old play Monopoly Junior?

The game is recommended for ages 5 and up; however, a four-year-old can learn to play Monopoly Junior with some assistance and patience from the other players.

Other Games Similar to Monopoly Junior (Our Guides)

For your next family game night, be sure to check out these other fun children’s games: