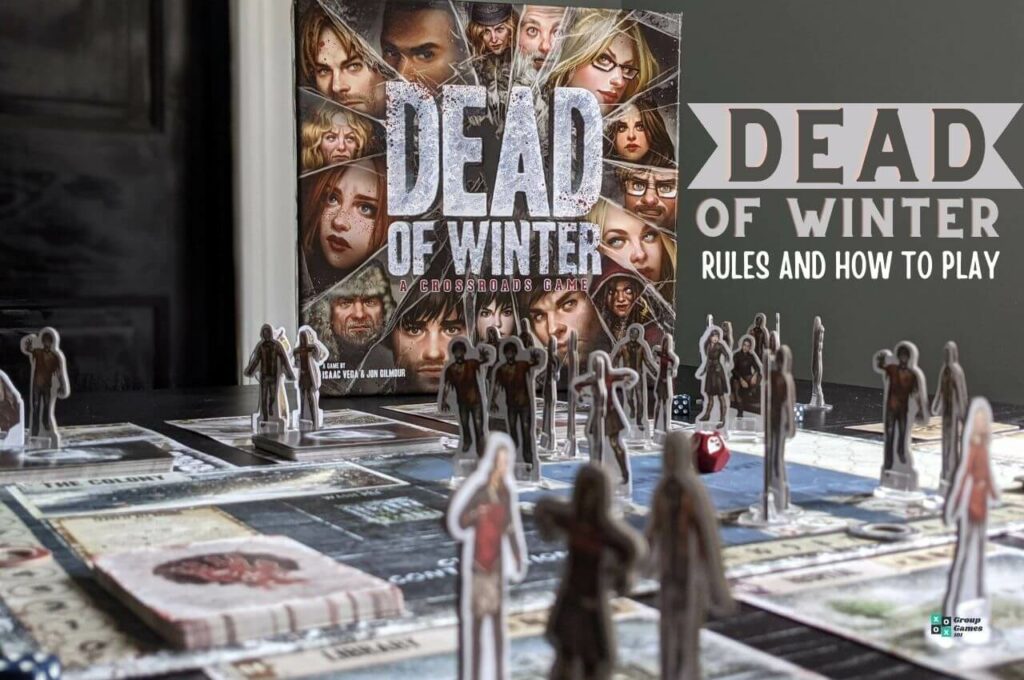 Dead of Winter is a board game that transports you directly into a colony with other survivors who all share the same goal: Stay alive, no matter what it takes!

During gameplay, you’ll have to make important game-altering decisions, complete your personal objective, and collect food, weapons, and supplies. However, there’s a chance your fellow survivors may stab you in the back instead of the zombies.

Winner of multiple awards for its unique innovation and thematic semi-cooperative gameplay, Dead of Winter by Plaid Hat Games is sure to please gaming and zombie lovers alike.

Are you ready to experience the reality of surviving in a zombie apocalypse? Learn how to play Dead of Winter below!

What is Dead of Winter?

Dead of Winter is a zombie-themed survival adventure game. It is semi-cooperative, meaning players work cooperatively towards one goal, but each player has their own personal goal to accomplish, also.

Survivors will attempt to work together to fight zombies and look for supplies to help keep the colony safe and everyone fed.

Similar to: Zombicide, Betrayal at House on the Hill, Battlestar Galactica

Why We Love It: The Crossroad Cards add an exciting element that makes every turn suspenseful. They are always unpredictable and provide nearly endless replayability for future sessions.

Everything you need to play Dead of Winter can be found in the box:

The box contains the following components: Dead of Winter
$54.79
Buy Now
We earn a commission if you click this link and make a purchase at no additional cost to you.

Dead of Winter can be played on your standard kitchen or card table. Each player should reserve a small area in front of them for their Player Reference Sheet, Survivor Cards, and any additional cards they may collect during gameplay.

The play area will need to fit:

You will also need to keep the zombie and additional survivor standees within reach. If you don’t have room on your table, you can keep them in the game’s box nearby.

How to Setup the Game

The following setup is for a game involving 3 players. The rulebook will explain in further detail the different game variants and their set up such as a 2 player game, strictly co-op, hardcore, etc.

The setup instructions will tell you how many zombies you need to place on the board and where to place the tokens on the Round and Morale Trackers. It will also provide a storyline to read aloud before gameplay that pertains to the objective, which can be found in the back of the rulebook.

Shuffle all of the set-aside Secret Objective cards together, then deal 1 to each player, still keeping them facedown. Put the remaining cards back in the box without looking through them!

Players must keep their secret objective to themselves until the end of the game!

Do the same with the Survivor, Exiled Objective, and Crossroadcards. There is no space on the Colony board for these decks, so you may place them within reach in the play area.

The remaining survivor gets placed under the Player Reference Sheet where it says “Followers.” Any other survivor that is picked up during gameplay will automatically be placed in this area next to your other survivors.

How to Play Dead of Winter

In Dead of Winter, each round consists of 2 phases: Player Turn Phase and Colony Phase.

In order, resolve the following effects at the start of the Player Turn Phase:

Throughout gameplay, players will attempt to contribute what is needed to avoid that crisis. If players do not contribute enough, they have to suffer that Crisis card’s “Fail” effect.

On your turn, you can assign all of your action dice on one survivor or spread them out amongst your survivors. However, you’ll need to consider the face value of each die before assigning it to a survivor.

If a survivor’s Attack or Search Value on their card is lower than the face value of an action die, they cannot perform an attack or search action with that die.

If the player activates the Crossroad card, the person who is reading the card interrupts the game and reads the card aloud. Typically, the card will provide a scenario, and either the active player or all players will take a vote on it.

The card reader will then read the result aloud unless the card states otherwise. This can alter gameplay immensely, keeping the game interesting and unpredictable!

On a player’s turn, they can perform the following actions, if able:

Actions that require an Action Die:

Actions that DO NOT require an Action Die:

Whenever a player moves their survivor to a new location or fights a zombie, an exposure roll needs to be performed (unless a player uses a card that states otherwise).

Possible Rolls and Their Effects

When a player gets bitten, they are automatically killed and removed from the game. If there are other survivors in the location where this survivor was killed, the bite effect spreads to the survivor with the lowest influence.

In order to stop the bite from spreading even further, the player who controls that survivor has two options:

If that survivor rolls anything other than a blank, the bite effect keeps spreading to the next survivor with the lowest influence. This spread will continue until the most recently bitten survivor is killed or a blank die result is rolled.

NOTE: When a survivor gets killed in the game for any reason, you must remember to move the Morale tracker down by 1 on the Colony board.

During the Colony Phase, you must complete the following actions in order:

How to Win at Dead of Winter

To determine who wins, the game must first come to an end. The game will end if either of these conditions are met:

Once the game ends, any player who has completed their Secret Objective wins!

How long does it take to play Dead of Winter?

The box states an average game is around 60-120 minutes, but it also depends on the Main Objective card you choose to play with. Main Objective cards are each labeled Short, Medium, and Long and can last anywhere from 45-210 minutes.

Dead of Winter: The Long Night is a standalone expansion. Look at our expansion section below for additional information!

Can Dead of Winter be played solo?

No, Dead of Winter is strictly meant to be played for 2-5 players.

Currently, there are two expansions for Dead of Winter:

Dead of Winter: Warring Colonies is an expansion that requires the base game, adds new rules, and allows you to play with up to 4-11 players at once!

Dead of Winter: The Long Night is a standalone expansion. You do not need the base game to play, but if you have it, there are some instructions to utilize components from both games.

Similar Games to Dead of Winter (Our Guides)

If you enjoyed playing Dead of Winter, below is a list of other similar games you might enjoy playing and learning about (if we’ve covered it):

Read all the articles (40) written by Heather Contino