Waking queens up from a royal slumber is usually not advisable, but the Sleeping Queens rules encourage exactly this for players to be able to win the game.

Sleeping Queens relies on players having a bit of luck but also being able to save their best cards until the end and turn a loss into an unlikely victory.

The themes in this game are mainly aimed at kids. However, the gameplay is surprisingly tactical, meaning that older kids and adults should still have fun playing too.

This card game makes for a great indoor group game for kids too, so learn exactly how to play Sleeping Queens by reading on.

What Is Sleeping Queens?

Sleeping Queens is a card game where players earn points by collecting the queens, which earn them a score.

The player who hits the score limit first or has the most points at the end wins, but other players will use power cards to attempt to steal already awakened Queens and their points.

The game is seen as a cross in difficulty between Hit the Deck (see our guide to the Hit the Deck rules) and The Mind card game.

So Sleeping Queens is ideal if you were looking to introduce kids to a slightly more tactical game without having to worry about difficult rules or game mechanics.

Main Objective: Be the first player to score a specific number of points or have the most points at the end of the game.

Why We Love It: Sleeping Queens is an example of a card game designed for kids that is not only great fun to play no matter the age but can even help with numerical skills too. 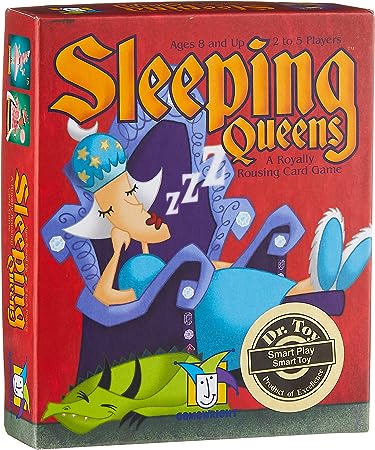 Sleeping Queens Card Game, 79 Cards
$11.99
Buy Now
We earn a commission if you click this link and make a purchase at no additional cost to you.

And if you’re someone who sees themselves as a real collector of card games, don’t miss out on the collector’s edition version of Sleeping Queens, which comes in a special tin.

How To Set Up Sleeping Queens

Setting up Sleeping Queens is straightforward but does have a few steps to it, so be sure to do it accurately, or it could affect gameplay.

Start by separating all of the cards into 2 decks according to the back of the cards, either Red or Green.

Make sure that the 12 Queen cards are shuffled and placed in the middle of the table face-down, in 4 rows of 3.

Give the Red deck with the remaining cards a good shuffle, and hand out 5 to each player. The rest gets placed in a pile face-down in the middle as the draw pile.

Leave a space next to the draw pile to act as the discard pile.

Make sure you’re familiar with the cards before you begin the game; each card has a different value or effect that gets used throughout the time you play.

Choose any way that works for you and your group to decide who begins the game. A common way to do this is to pick the youngest but anyway will do.

Once the dealer shuffles the cards, the player sitting on their left can begin the game by playing 1 of the 5 cards in their hand.

Play is turn-based and goes round clockwise.

How to Play Sleeping Queens

On a players turn, if they have a power card in their hand, they can use them to initiate 1 of the following actions:

The Jester card functions differently depending on what card gets drawn, if it’s a power card, add it to your hand, and the turn ends.

If a numbered card gets drawn, count around the circle equal to the number displayed on the card. Whoever the count lands on, that player gets to take a Queen from the middle.

Once a player finishes using a power card, they add it to the discard pile.

There are 3 ways to discard cards to be able to replace them from the draw pile:

Some of the Sleeping Queens have special powers that get activated once they have been awoken from their slumber.

The Rose Queen, although only worth 5 points, allows a player to pick a second Sleeping Queen from the middle as well.

Once drawn, the Strawberry Queen cannot be put back into the middle or stolen by any other player.

Keep note also that the Dog Queen and Cat Queen cannot be held by 1 player simultaneously, as the trope is that cats and dogs regularly fight.

If a player owns 1 of these and draws the other, they cannot keep the card they draw, and their turn ends there.

Gameplay continues until either 1 player hits the points cap or until all of the Queens get woken up, whichever comes first.

Each Queen has a number attached to their card, which is how many points the player gets for owning that Queen.

If playing a 2-3 player game, then the game ends if a player hits 50 points, whereas a 4-5 player game continues until 40 points.

The points only count as long as a player has possession of the Queen – if another player steals them or she gets sent back to the middle, then that player loses the points.

Alternatively, if all the Queens have been removed from the middle and no player has reached the score limit, award the win to the player with the highest score.

Allow ties if there are multiple players with the same score, or play again until you reach a definitive winner.

How many points are the Sleeping Queens worth?

The points of each Queen vary from 5 points to 20 points, with the Queen worth 5 points, of course, having an additional power if drawn.

How many cards are there in Sleeping Queens?

There are 79 cards in total in Sleeping Queens, which means there are enough for a maximum of 5 players.

In the Sleeping Queen rules, what happens if players run out of cards on the draw pile?

Like in many similar games, if the draw pile gets used up throughout the game, then grab the discard pile, shuffle and resume the game with them as the new draw pile instead.

If you like unique card games for kids that are of varying difficulties, then be sure to check out the Slamwich rules and the BANG! card game rules.

Alternatively, if it’s group games for teenagers that you’re after, then we’ve got some card games that should fit the bill nicely.

Learn how to play Unstable Unicorns or have a look at the Funemployed rules, both these games have more adult themes perfectly suited to keep teenagers engaged while playing.