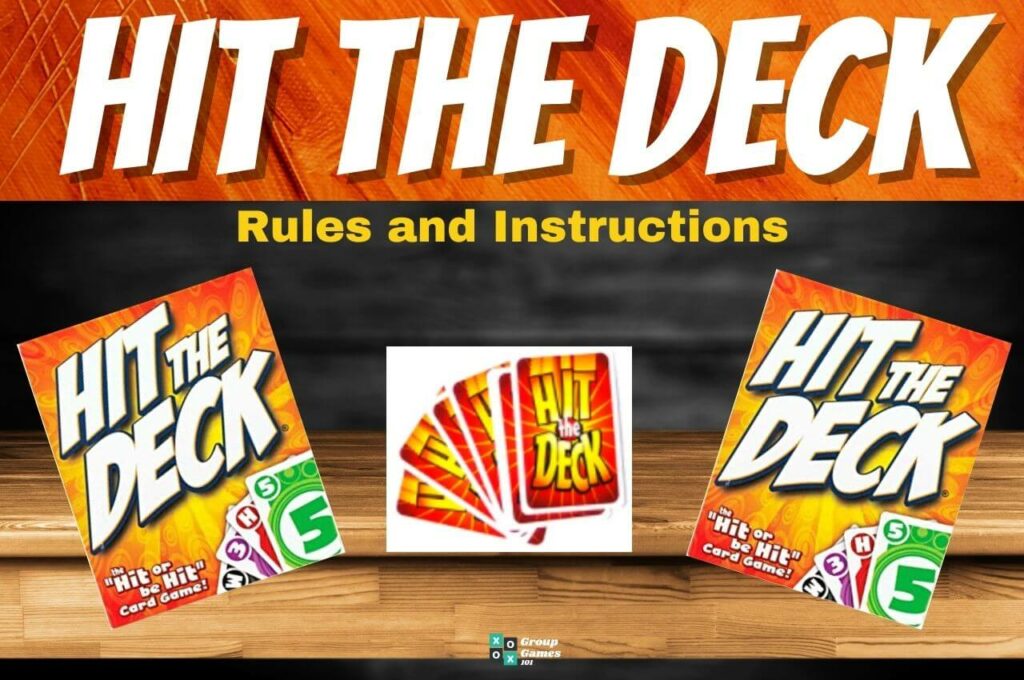 Hit the Deck is a huge hit with families and super easy to learn. If you’re looking for a new fun card game, then this could be the one for you.

In Hit the Deck, you need to play your cards wisely and make your opponents FLIP, CUT or HIT the DECK! The player with the least points after someone reaches 100 points wins.

This is one of the most straightforward card games out there; fast-paced, suitable for all abilities, and exciting to play. We rate this highly as a great indoor group game and a perfect game to take on vacation.

Read on to find out how to play Hit the Deck.

What is Hit The Deck?

Hit the Deck is a card game, pretty similar to UNO (see Classic UNO rules). Players play by matching the numbers or colors of the cards in their hand to those in the discard pile. However, to keep it exciting, there are some twists and turns which shake the game up.

Number of Players: 2 to 6 players.

Main Objective: To have the lowest score when a player reaches 100 points.

Why We Love it: The rules are super easy to learn, and everyone can join in. It’s a great gateway game into the world of card playing, and we love how portable this game is (it’s a deck of cards), so it can go anywhere with you.

What You’ll Need to Play Hit The Deck

All you need to play Hit The Deck is the Hit the Deck cards.

UNIVERSITY GAMES CORPORATION HIT The Deck
$7.49
Buy Now
We earn a commission if you click this link and make a purchase at no additional cost to you.

Altogether there are 110 cards and a set of instructions that come with the deck. The cards come in 4 different colors.

Each Color Set Has:

Other Cards Included are:

There are a few rules for setting up the game, which go as follows:

First, players must take off all jewelry from their hands and wrists before playing the game.

Choose the dealer: Who will then shuffle and deal the cards.

After shuffling, the dealer distributes 7 cards to each player.

The left-over cards are then put in the middle of the table (face-down).

The dealer turns over the top card from the center pile to create the discard pile. If this is a ‘Hit the Deck With Hand‘ card, it must be placed back in the pack and a new card drawn.

How to Play Hit The Deck

Players play the cards they’re able to in their hand until they have none left, which ends the round.

The gameplay proceeds around the table, with the 1st player being the person to the dealer’s left.

Each player must take one of the following actions:

First, match to the card in the discard pile by either having the same number or the color.

If a player can’t play using their existing cards, they can pull a new card from the deck. If they still can’t play, gameplay moves on to the next player. And so on.

Play starts with the player left to the dealer and proceeds this way until modified by a ‘Word’ card.

There are 5 special cards; below are the rules for using one of these cards in the game.

On the next player’s turn, they are to roughly half the deck (cut it), take the top card presented, and put it into the discard heap ending their turn.

The order of play is then reversed, with the player who played the Flip The Deck card being the one to take action. Reverse order play continues until it’s flipped again.

If a Flip The Deck card is the revealed card, it should be shuffled back into the deck with a new card on top of the discard pile.

If a ‘Hit the Deck With a Hand‘ card is the revealed card, the active player should shout this out, and every player then hits the deck with their hands.

Hit The Deck With a Number

If a card with a matching number isn’t played, the following player should play a card matching the Hit The Deck number if they can.

Play goes around the table in this way until a player can match the required number; play will then return to normal.

Hit The Deck With a Color

The next player should play a card from their hand that matches the color of the Hit The Deck With a Color card. If they can’t do this, then they should draw a card and play if able.

Play continues around the table until a player can match the required color. Play will then return to normal.

Hit The Deck With a Hand

When a Hit The Deck With a Hand card is drawn, everyone is to shout this out and then physically hit the discard pile with their hand.

If someone hits the middle cards when the Hit The Deck With a Hand card hasn’t been played, they’re penalized by drawing out 2 cards from the deck.

A round is finished when a player runs out of cards. This leaves that player with a score of 0 for the round.

Other players add up their points for the round: Number Cards are tallied at face value, and Word Cards and Hit The Deck Cards have a total of 10 points each.

Play carries on until a player reaches 100 points. After that, the player who has the lowest score wins the game.

Players can agree on a lower number than 100 to shorten the game length or a higher number to extend gameplay.

Why Do You Have to Remove All Jewelry Before Playing Hit the Deck?

If players are wearing rings, bracelets, or watches when they physically hit the deck, this could hurt, so it’s best to remove them for this reason.

Can Children Younger Than 6 Play Hit The Deck?

As long as a child can recognize numbers and colors, we believe children younger than 6 can play Hit The Deck, and it could even help develop these skills alongside observation, patience, and turn-taking.

Alternative Games to Hit The Deck

Hit the Deck is very similar to Go Fish, as players have to be aware of the cards in their hand and observe how the cards available to them can help and what cards they need to proceed with.

Rat, a Tat Cat, is another card game suitable for younger children. This is similar to Follow the Queen Poker, with players having to bluff their way to the top, but more simplified and suitable for children aged 6+.