If you’ve ever wanted to learn all about the Slamwich rules, this guide includes all the information you’ll need to play Slamwich the card game.

On the face of it, Slamwich seems like it isn’t the most challenging game to pick up and play instantly, but there are a couple of different rules that will be worth getting explained first.

And once you’ve understood all the rules, you’ll see that Slamwich is a game that can be busted out at any moment for some fast and furious gameplay.

So read on to find out exactly how to play Slamwich and discover how fun this card game can be.

Slamwich is a classic card game that requires players to quickly place cards onto a pile and become the first player to slam their hand down when they notice a pattern emerge at random.

If you’ve ever played Snap when you were younger, then the gameplay is essentially the same, except Slamwich adds a few more rules in to make the game slightly more difficult.

Like other games such as classic UNO or Racko (be sure to check out the Racko rules), you’ll need a specific, specialized deck before you can begin playing.

Who Can Play It: Recommended for ages 6+.

Length of Play: 20 minutes per game.

Main Objective: Become the first player to collect all of the cards.

Why We Love It: Slamwich is intense, quick, but easy enough for most players to pick up and play without much direction. Ideal for younger kids, the compact game deck means it’s an ideal camping game played in small groups, or even in a small office.

If you’re looking to play Slamwich, then you’ll need to buy the official Slamwich deck of cards that comes with the following: 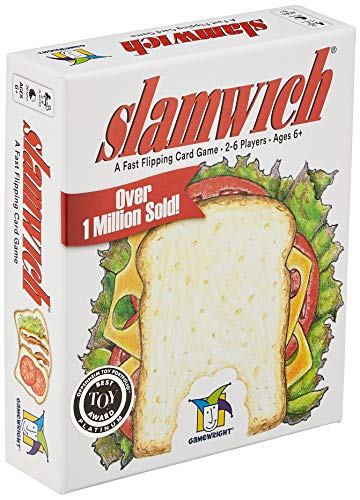 Gamewright Slamwich
$11.99 $9.99
Buy Now
We earn a commission if you click this link and make a purchase at no additional cost to you.

And that’s everything you’ll need to play, so you can see why it’s a popular game to take with you when going away on vacation.

For those of you who like to display their card games in a collectors edition case, Slamwich has got you covered with its own take on a special case for your games. 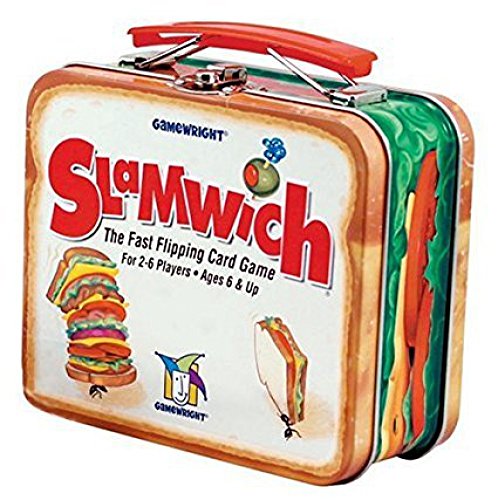 Slamwich Collector's Edition Tin 2-Pack
$34.89
Buy Now
We earn a commission if you click this link and make a purchase at no additional cost to you.

How To Set Up Slamwich

Setting up Slamwich is simple, but you’ll need to first pick who the dealer is to shuffle the cards.

Decide this by any metric that suits you and your group, to keep in line with the game, pick whoever was the last to eat a sandwich if you’re stuck deciding.

Once the dealer shuffles the deck, deal out all the cards to players but make sure that cards are also dealt in the middle of players as well.

So if you’re playing with 5 players, you’ll need to deal all the cards out as if there were 6 players with the extra stack of cards placed face up in the middle of players.

Players aren’t allowed to look at their hands at this point either, so make sure there’s no cheating going on.

There aren’t many demanding rules to worry about when playing Slamwich, meaning you’ll spend more time playing than you will understand the game.

Make sure that before you play, each player has had a chance to quickly look at the different pictures displayed on each card, so there are no surprises while playing.

The game begins with the player to the left of the dealer and goes clockwise, with each player taking their turn individually.

The starting player turns their top card over and places it on top of the current pile in the middle, with the next player doing this as well.

How to Play Slamwich

Players continue to place their cards from their hand onto the middle pile until 1 of these 3 scenarios occurs:

If any of these 3 things happen throughout the game, then all players are required to slap the top of the deck with the person whose hand is on the bottom wins the pile of cards.

In the case of the Thief, players not only need to slam their hand down on the deck. They also need to shout ‘Stop, Thief!’ as well.

The first player to complete both of these actions wins the pile of cards in the middle instead and gets to add the pile to the bottom of their own hand.

The player to the left of the player who picks up the cards restarts the game by placing a card to start a new pile.

There are also a couple of other Slamwich rules to be aware of as well while playing.

Occasionally a player will draw a Muncher card, which makes that player the Muncher.

Whichever player is on the left-hand side of the Muncher is tasked with stopping said Muncher while the Muncher places as many cards down as is displayed on the card.

They do this one at a time, and the Muncher ends when a player manages to spot and slap down on a Double Decker, Slamwich, or Thief before the Muncher can slap down their own hand.

Players also need to be aware of Slip Slaps, which occurs if a player slaps their hands down on the pile in the middle when there is no reason to.

If this happens then, the player must forfeit their top card onto the pile as a penalty, with the player to the left resuming the game.

The player who manages to hold every card at the end of the game wins in Slamwich.

While playing, if any player loses all cards in their hands, then they are out of the game.

As games are over fairly quickly, if you have time for multiple rounds, then award each player 1 point for every game that they win.

Declare the person with the most points at the end of the game the overall winner of Slamwich.

How many cards does each player get in Slamwich?

The number of cards that each player gets does depend on the number of people playing as the entire deck gets dealt out at the start of the game.

This is also why there is a maximum limit of 6 people in this game as any more will mean each player won’t have enough cards to play.

However, if you have the 2nd deck of Slamwich cards then you can play with more than 6 players.

When was Slamwich made?

Slamwich was made in 1994 which means that it is considered to be a retro game, although the game hasn’t changed in any way since then.

If you think that Slamwich is a game that you’ll enjoy playing, then be sure to take a look at some more game guides that we hope you’ll like just as much.

If quick and fast-paced card games are your thing, then check out the Funemployed rules and the Exploding Kittens rules for more great games for quick thinking.

For some different speedy games that are played at a similar pace to Slamwich, take a look at guides to the Hive and Kerplunk as well.