Have you ever had a heated debate with your pals over who would win in a fight between 2 unlikely foes?

If you have, then you simply must learn the Superfight rules for a card game that takes this concept and amplifies it massively to leave you arguing about who would win in the most random of matchups.

The rules are simple to learn once explained, and with the vast selection of cards to pick from, the combinations are almost endless.

Has this piqued your interest?

If so, read on to learn how to play Superfight, including how your fighter gets picked and how you go about winning the game.

Superfight is what happens when Cards Against Humanity meets the tv show Deadliest Warrior, and Epic Rap Battles of History found on YouTube.

By drawing cards at random, players will get a character card such as ‘Cat’ or ‘Ginger’ and a couple of attribute cards such as ‘Hasn’t eaten in 2 days or ‘massive nipples’ to create their warrior.

They will then need to convince everyone else why these attributes combined with their character make for a fearsome foe.

Who Can Play It: Teenagers, Young Adults, and Adults.

Main Objective: Create the best fighter with the cards that you draw throughout the game. Use your created fighter to defeat the other players.

Why We Love It: A game that encourages friendly debate, there’s not too much you’ll need to know before you begin playing Superfight. As long as you’re prepared for the weird and wonderful scenarios that’ll arise; as a result, this game will definitely be a hit.

Superfight comes in a box that includes all the cards that you’ll need to begin playing. 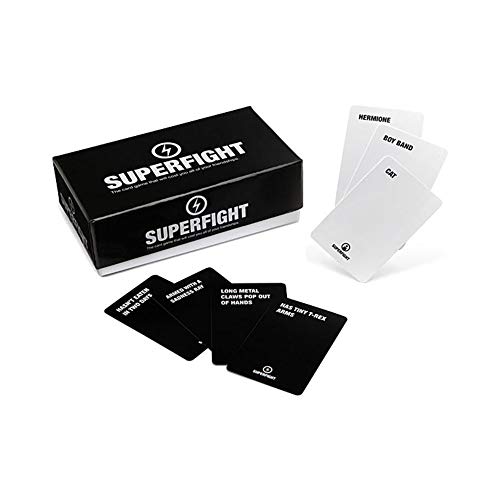 Superfight a Card Game of Absurd Arguments | Fun Family Friendly, 500-card Deck
$27.99
Buy Now
We earn a commission if you click this link and make a purchase at no additional cost to you.

The deck includes the following cards:

And just like other modern card games such as BANG! and Unstable Unicorns, Superfight has a vast array of different expansion packs for players to add more cards to the base version.

Some examples include but aren’t limited to the Sci-Fi deck, the Horror deck, and the History deck. There is sure to be an expansion tailored to your own interests. 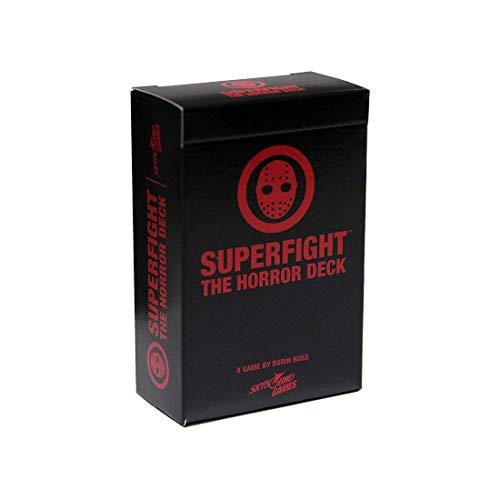 Superfight Horror Deck: 100 Themed Cards for The Game of Absurd Arguments | for Teens and Adults
$14.93
Buy Now
We earn a commission if you click this link and make a purchase at no additional cost to you.

It’s also a good idea to have a timer on hand.

How To Set Up Superfight

Start the setup process by separating the white character cards from the black attribute cards.

Give both decks a good shuffle, and deal out 3 of each card to each player, so everyone playing has 6 cards in total to begin.

Players can look at their own cards at this point but must keep them away from other players.

Place the remaining cards in the middle of the table as 2 separate draw piles, face down.

This is finally your chance to create some truly epic matchups depending on the cards that you draw. But drawing the right card combinations is just half the challenge.

Superfight requires players to use facts and reason to attempt to explain why their fighter would prevail over all others.

Usually, the player who is the youngest starts the game, but you can also choose any other way to pick the starting player if you prefer.

Out of the 6 cards that players start with, they must only keep 1 black card and 1 white card from their original hand. Set the others aside into a discard pile.

Going around the circle, players must also draw 1 additional black attribute card to add to their fighter.

They must also take whichever card they draw here and cannot redraw or discard this card.

Once everyone has 1 white character card and 2 black cards, the fighting can begin!

How to Play Superfight

The main goal of Superfight is to convince the other players that your fighter would defeat the other fighters in combat.

The game gets played in a round-robin tournament format with players going up against the person who they are opposite in the circle.

Start with the player who got picked to start the game and whoever they are opposite.

Have them both turn over their cards to reveal their fighter and 2 attributes that they possess.

Players have 1 minute to explain why their fighter would defeat their opponents. They also get an additional minute to retort to the other player after each speech.

After the 4 minutes is up (4 1-minute speeches per matchup, 2 per player), the remaining players vote for who they believe made the most convincing argument.

The winner goes through to the next round while the loser is out of the game.

After each round, players need to redraw their cards and repeat the process so that each knockout round has a fresh matchup.

Continue until there are only 2 players left who compete in the final. Whoever wins the final wins Superfight.

If you’re playing multiple rounds of Superfight, you can introduce a scoring system to keep track of each player’s performance at the end of games night.

Award each player 1 point for each round won, or give the top 3 players 5, 3, and 1 point respectively, depending on which position they finished in.

There isn’t an official scoring system attached to the Superfight game rules, so use whatever system works best for you and your pals.

What do the Superfight rules say to do when there is an odd number of players?

If there is an odd number of players, then award 1 player at random a bye which puts them through to the next round without competing.

Use whichever way works for your friend group to decide who gets the bye.

How many players do you need to play Superfight?

You will need at least 3 players to play, but the maximum number of players depends on the number of cards that you have.

To keep gameplay less confusing, try to keep to a maximum of around 10 players, however.

Despite being about theoretical fights, Superfight is family-friendly. There’s no danger of running into any leud content in case you’re looking for a game to play with Grandma.

Superfight is definitely a good example of a modern take on card games that encourage players to think quickly on their feet and learn to play with the cards that they’re dealt with.

If you think you’ll enjoy Superfight and are after similar card games, stick around and check out guides to the Llamas Unleashed rules and the Funemployed rules.