If you’re a fan of trick-taking or Rummy-like games, then learning the Joker rules is something we definitely recommend.

Designed for you to play with 3 other players, Joker only uses 36 cards ins a standard size deck to limit the scoring options and makes games closer and more intense.

The players try to guess how many hands they’ll win, with bonus points awarded to correct players, which means that the player who wins the most hands may not be the eventual winner.

So take a look at our guide to how to play Joker, including instructions on scoring, how to set up your 36 card deck, and answers to some commonly asked Joker questions.

What is the Joker card game?

Joker is a trick-taking card game that requires players to attempt to predict how many tricks that they’ll win throughout the game with points awarded to players who are successful.

Like other trick-taking games, Tarneeb (Tarneeb rules) and Pinochle (Pinochle rules), it’s not necessarily the number of hands you win to ensure you win the game.

Who Can Play It: Teens, Young Adults, Adults

Main Objective: Points get awarded based on how many tricks a player wins and how close to their predicted trick target they were, the highest points wins.

Why We Love It: Joker is a game that doesn’t necessarily reward players for how good they are, but those who can tactically win or lose games to achieve their trick-winning target. It’s a great way to view card games in a different way and also teach critical thinking and forward planning skills.

To play Joker, grab yourself a deck of cards to begin.

Any deck will do, we recommend getting a deck from such makes as Maverick or Regal Games if you don’t have any to hand.

Make sure you’re playing on a surface large enough for everyone to be able to play their cards but small enough that everyone can reach the middle as well.

A pen and paper or whiteboard will also come in handy as well in this game. 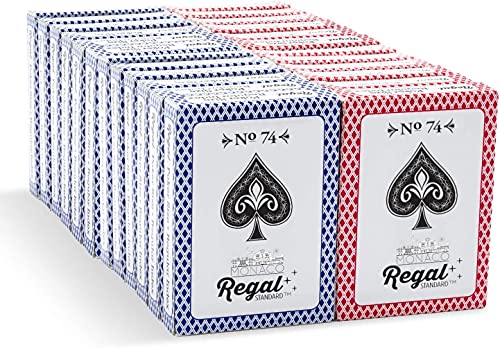 How To Set Up the Joker Card Game

Start setting up Joker by removing all of the 5’s, 4’s, 3’s, 2’s, and the red 6’s from your deck of cards and set these aside as you won’t need these cards in this game.

Grab the 2 Jokers; unsurprisingly, these are used in the game instead of the 2 red 6’s; you should be left with 36 cards in total for the game.

The game gets played in a clockwise fashion one at a time; each player plays on their own as well.

Each game of Joker has 24 hands; each hand varies in the total of sets and cards that each player has to play with and try to do tricks during the game:

Before the game properly begins, players will need to initiate the bidding process starting with the player to the left of the dealer going around the circle.

Players bid on how many tricks they’ll win throughout the set – basically the number of hands they’ll win out of the 8 or 4 hands that get played in each set.

A player can pass by announcing 0 tricks, and players cannot match the tricks to the number of hands they are playing in that set.

Make sure you write down everyone’s bids so you can refer back to them in the scoring portion of the game.

Each hand starts with a player shuffling the deck, and whoever is sitting to their right cuts it.

The relevant number of cards depends on the set and the hand needed to get dealt out.

The rest of the cards are set aside except the topmost card which you turn over; this becomes the trump suit for the hand.

Cards get redealt after every hand, so players will need to shuffle and cut the deck 24 times throughout the game.

The player to the dealer’s left begins the game with the first set.

How to Play Joker

The starting player must play one of their cards in their hand as the lead, followed by the rest of the players picking a card in their hand to follow.

Players must attempt to follow the trump (or the suit) if they can, but this isn’t a necessity if they don’t have a card with a matching suit.

The trick is won by the player who plays the card that is the highest and that matches the trump card.

At times, the Joker may get played in the trick if a player has one on their hand, the player who uses the Joker decides whether it’s high or low in value.

If the Joker gets led (played first) in the trick and is high, then players can ignore the trump suit and play their highest card to win the trick.

The other players must still follow the trump suit if the Joker is low.

Usually, a Joker that is high always wins the trick and the Joker that is low always loses the trick. Still, it can fail if another player plays a Joker in the same trick.

After the 24th hand, the game finishes and moves over to the scoring portion of the game.

Remember when everyone bid to see how many tricks that they would win throughout the sets?

Refer back to everyone’s predictions, and match them against the number of tricks each player won in the 4 sets.

The player with the most points at the end of the game wins Joker.

Are there any more Joker rules you can add to the game to make it harder?

To make the game harder or have higher stakes, you can implement a penalty for players who aren’t able to reach their trick target or who exceed it.

Anyone who is under or over their trick target is given a 100 point penalty for every 1 that they are over/under.

Can you play Joker with more or less than 4 players?

Our guide covers the Joker rules for 4 players, and although it is best played with 4 you can play with 3, 5, or 6 if you adjust how many hands you play in each set.

Can I still play Joker if I don’t have the Joker cards anymore?

You can still play Joker even without the Joker cards. Simply choose 2 other cards from the discarded pile to use in their place instead.

Joker is an excellent trick-taking card game that should help you view card games in a different way, it’s not about how many hands you win but strategically throwing hands to score the most points.

If you would like to learn more trick-taking games, then stick around and take a look at our guides to the Sheepshead rules and the Pitch card game rules as well.

For easier games that are also trick-taking but you can also use as an entryway into the genre of card games, check out the Idiot card game or the Wizard rules.