Euchre is a traditional European card game dating back to the Napoleonean era. It will test your focus, tactic skills, and cooperation since it is played in teams of two. These Euchre rules explain the gameplay in detail.

Euchre is a simple and totally rewarding card game suitable for anyone who likes fast-paced, dynamic, yet smart and logical games. Players sometimes liken this game to Pinochle since it is also played in pairs and involves tricks taking (see Pinochle rules).

Moreover, it can also resemble Nines using trumps, although unlike in Nines, trump stays the same in Euchre for the whole duration of the round (check out the Nines card game rules).

If you’re a seasoned player, Euchre will seem fairly familiar to you. Beginners can pick it up quickly and easily too.

This Euchre game rules guide will cover the following:

The following sections explain how to play Euchre step by step.

Euchre is a dynamic trick-taking card game popular in many parts of the world. Although it can be played in a pair, it was originally intended for four players divided into two competing teams.

Number of Players: 2 or 4 players

Main Objective: Win as many tricks as possible, earn 10 points, and beat the opposing team.

Why We Love It: In Euchre, you can only play with the few cards you receive. Nevertheless, there are many ways to affect the gameplay, deploy your tactic skills, and earn your victory. The more you practice, the better you get!

What You’ll Need to Play Euchre

To play Euchre, you need one of the following: 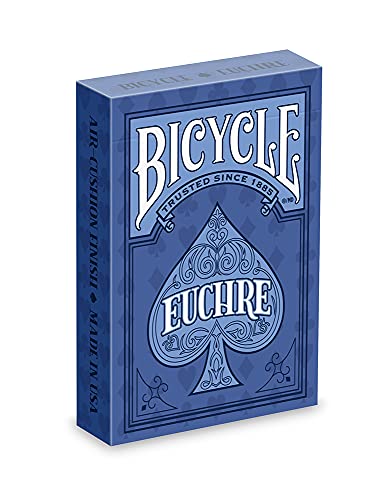 Bicycle Euchre Playing Card Deck - 9 Through Ace - Double Deck , Blue
$6.82
Buy Now
We earn a commission if you click this link and make a purchase at no additional cost to you.

As I have already mentioned, Euchre rules have many variations and alternative interpretations. It can even be played with a different number of cards, which might cause a lot of confusion if you’re totally new to this game.

To make things easier and clearer, this guide explains Euchre’s gameplay with 24 cards in two teams consisting of two players, which is usually considered the most traditional version of this game.

First, prepare your deck by sorting out any unnecessary cards (in our case, sort out all 7s and 8s). Now you’re ready to start dealing:

In Euchre, cards are ranked in the following order:

However, everything changes in the case of a trump suit:

The same applies to clubs and spades.

How to decide on a trump?

The first player to the left from the dealer has the right to pick a trump suit first. Nevertheless, he cannot pick a suit freely right from the start – instead, he only confirms the suit of the face-up card on a pile of remaining cards or passes.

The team of the player who chose the trump is considered to be Attackers, whereas the other team will be Defenders.

How to Play Euchre

Players aim to win more tricks than their opponents from another team. “Trick” is basically a round of turns in which each player lays down one card. The winner of the trick is whoever plays the highest-ranking card. This is how the gameplay goes:

The game continues until players get rid of all the cards in their hands.

Who can play Euchre alone?

The player who decided on the trump has the option to play alone, without his teammate. His partner is forced to put his cards down and wait for the round to end without participating.

At the end of each round, teams put together their tricks and count them. The scoring differs depending on whether the team acted as Attackers or Defenders in the evaluated round:

As you see, winning three tricks is a threshold for getting any points at all. This is called eucher.

In the case of a sole player (see ‘Who can play Eucher alone?’ above), the scoring is a bit different:

Originally, players kept their score in Eucher in the form of two cards with a total value of 10 (e.g., two 5s). These are usually laid one across the other to reveal precisely the number of symbols representing the current score of the team.

Of course, nowadays, people often prefer writing down the score on a basic scorecard.

The first team scoring 10 points wins the whole Euchre game. The teams play as many rounds as needed to achieve this goal.

How to Play Euchre – Video Tutorial

What is ‘farmer’s hand’ in Euchre?

If you receive a hand full of 9s and 10s (the lowest ranking cards in the game), it is called a Farmer’s hand. You can announce this, and the cards will be reshuffled and dealt with again.

Can you lead with trump in Euchre firsthand?

Yes, you can lead with whatever card you choose in Euchre, including a trump.

What does ‘in the barn’ mean in Euchre?

In Euchre, the players aim to earn 10 points, which would make them the ultimate winners. If either of the participating teams reaches 9 points, it is considered to be in a ‘barn.’

Other Similar Games to Euchre (Our Guides)

Do you need more inspiration? Here are our guides to other great trick-taking card games similar to Euchre:

Read all the articles (18) written by Lucia Fajnerova