Oh Hell, also known under many other names, is an excellent trick-taking game for all ages and levels of experience. These Oh Hell card game rules explain all you need to know before playing.

Estimation, Up and Down the Creek, Get Fred, Nomination Whist, Oh Pshaw…these are just a few of the names given for Oh Hell.

The game is often likened to Euchre (see Euchre rules) and compared to Spades (check our Spades card game rules) since it is also a trick-taking game. Nevertheless, while there are many similarities, Oh Hell is, in some regards, unique.

First and foremost, it is a relatively strict and lengthy game – two factors that can easily discourage beginners. But don’t let this put you off. The truth is that it just takes some practice, patience, and luck to win.

What is the Oh Hell Card Game?

In Oh Hell, your chances to win depend 50:50 on your skills and luck. That’s because the gameplay consists of both bidding and taking the tricks.

Although the principles and rules of the game are simple, the gameplay is quite long. It goes much better if you already have some experience with similar strategic games.

In any case, if you practice regularly, the game can truly teach you a thing or two about probability and predictions.

Difficulty: Easy to moderate (depending on your previous experience)

Why We Love It: Simple rules yet demanding gameplay. Oh Hell is a game of paradoxes, but the more you play it, the more you will love it.

Playing Oh Hell is very undemanding on accessories since it only requires a standard 52-playing card deck. You can sort out jokers immediately since you will not need them in this game. 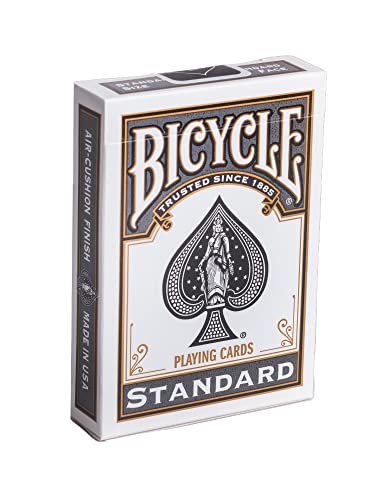 Bicycle Standard Rider Back Black
$8.89
Buy Now
We earn a commission if you click this link and make a purchase at no additional cost to you.

Although scoring in Oh Hell can be difficult, the rules of this game are straightforward to comprehend.

First, appoint the dealer. You can do it in several ways, but the official procedure says that each player should draw a random card and whoever gets the highest-ranking card becomes the dealer.

The dealer provides all the players with an equal number of cards according to the following scheme:

(Note that the dealing scheme can differ from country to country. Regardless of the number of cards, the only essential thing is to deal everyone an equal number of cards.)

Put the remaining cards in a pile somewhere on the side. This will be your stock. Turn the top stock card over and place it on top of the pile for everyone to see. This card’s suit will be treated as trump for the whole upcoming round.

How to Play Oh Hell

Now when you’re all set up, the gameplay becomes very easy. The first one to take the turn is the player sitting left of the dealer; then it continues clockwise:

What if you don’t have any cards from the lead suit?

If you cannot play a lead suit, you can choose a card from another suit. However, regardless of how high-ranking card you play, you cannot take a trick with any other card than the leading suit unless it is a trump suit.

A trump always wins the trick regardless of the card’s actual value. If multiple players play a trump, the highest-ranking card takes the trick.

Players continue until they have no more cards in their hands. The hand is then over, and it’s time for scoring.

Play another round with the role of the dealer moving to the left from the current one. With each new round, the dealers deal one card less to each player than in the previous one. When you’re down to zero cards, count the total score.

In the final round, players receive only a single card. The player with the highest total score wins the game.

What is Blackout in Oh Hell?

The “Blackout” is an alternative approach to scoring in Oh Hell, which only allows players who guessed the exact number of their tricks accurately to score points for each individual trick they have.

Yes. Mormon Bridge is so similar to Oh Hell that it is sometimes considered the same game. The main difference is in dealing. In Mormon Bridge, players first get only one card and add one more for each new hand, eventually ending with sever cards each.

Can you play Oh Hell with more than seven people?

Yes, but in this case, using two decks of cards is recommended instead of one.

Other Similar Games to Oh Hell (Our Guides)

Looking for some other exciting trick-taking card games? Here are our guides to a few impressive Oh Hell alternatives: