Cribbage is a popular card game for two players involving matching and combining cards to gain points and beat your opponent. These Cribbage rules explain the gameplay in detail, teaching you step-by-step how to play it and win over your friends.

Its complex scoring makes playing Cribbage a unique and challenging experience even for seasoned players.

Cribbage is ideal for two players, but you can easily adjust it for a few more if needed. In Cribbage, everything is about earning points, and there are many different ways to do it.

While it all might seem like a matter of fortune at first, as you get into the game and practice more, you should be able to develop quite an effective strategy for increasing your chances of winning.

This Cribbage game rules guide will cover the following:

Read on and find out how to play Cribbage one step at a time.

Cribbage is one of the most popular and widespread card games on the planet. It is complex, intricate, and quite complicated if you’re entirely new to this type of card game. Nevertheless, once you know the rules, it is very easy to get hooked on the game.

Unlike many other similar card games, Cribbage can be played even if you only have one opponent. In fact, the game fits two players the best, so you can play it pretty much at any time and anywhere.

Although it is, technically speaking, suitable for all age groups, younger kids will probably find Cribbage’s scoring scheme overly complicated. It is therefore recommended mostly for adolescent and adult players.

Number of Players: 2 (or 3 – 4 players with some adjustments)

Main Objective: Score 121 or more points faster than your opponent.

Why We Love It: Cribbage is a complicated yet gratifying card game. The more experience you gain playing it, the more fun it is, making Cribbage one of those games that will never bore you.

A brief history of Cribbage

Cribbage has developed from old English card games like Costly Colors and Noddy. Some sources claim it was invented by Sir John Suckling, a well-known English poet in the early 17th century. Iconic Victorian-era writer Charles Dickens even depicted Cribbage in his novel The Old Curiosity Shop.

Cribbage became an enormously popular pub game. Later, it was also adopted by the military, becoming one of the favorite pastimes for American marines and submariners during World War II.

People invented many alternative Cribbage rules over time (I will mention a few later). The game also served as a foundation for creating the Scrabble-like Kings Cribbage game and a one-player Cribbage-style solitaire.

What You’ll Need to Play Cribbage

You can buy both of these together in a dedicated Cribbage game set. 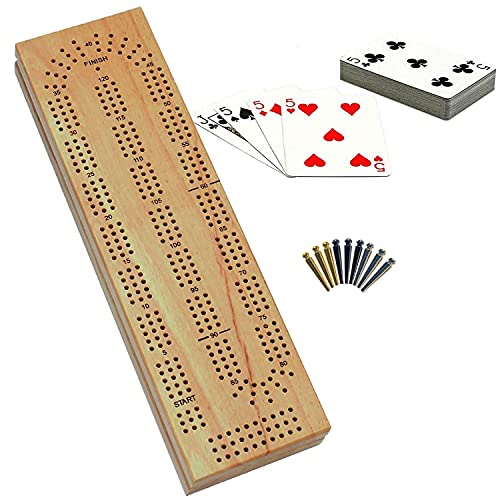 WE Games Cabinet Cribbage Set - Solid Wood Continuous 3 Track Board with Easy Grip Pegs, Cards and Storage Area
$27.49$24.99
Buy Now
We earn a commission if you click this link and make a purchase at no additional cost to you.

Cribbage is all about combining the cards you get and squeezing as many points as possible out of your hand and the so-called crib.

Beginners usually need some time to adapt to the gameplay, but the rounds will get more dynamic and faster as you get more confident.

Before you start playing Cribbage, you need to prepare all the materials and your gaming area:

To decide who will act as a dealer, each player cuts the deck and looks at the card at the bottom. The player with the lowest card is the dealer.

Each player now picks two of their cards and discards them face-down in front of them. These four cards are put together, forming the crib. Put it aside until the end of the hand.

The non-dealer cuts the deck once again. The dealer flips the upper card from the cut and puts it face-up on the top of the pile. This will be your starting card.

Commonly, the pegs are moved along the outer edge of the board first (on their respective sides), then following the opposite route in the second line of holes. When the pegs travel this circuit twice, the player should meet the points threshold for winning.

The Cribbage game involves counting the cards’ value. For this purpose:

How to Play Cribbage

The starting card determines the first action in the game. If it is Jack (the trick is known as “His Heels”), the dealer immediately scores two points and pegs two corresponding holes.

Then the game goes as follows:

When no more cards can be played, restart the counting from zero again. Turn over the cards on the table and start a new round with your remaining cards. The player who scored “Go!” goes first now.

Repeat this until the players play all their cards. If one player runs out of cards earlier than the other, the remaining player continues by himself.

Here are several ways how you can score throughout the Cribbage gameplay:

When all the cards are played, players earn points by combining the starting card value with their played hand, collected in their discard pile. This phase of the game is known as The Show.

You can combine either the cards from your hand with each other or with the starting card. You are even allowed to score the same card as part of different combinations repeatedly. For this stage of gameplay, there is an additional scoring scheme in Cribbage:

Note: Keep in mind that these combinations are only scored in the Show phase of the game. Flush or One for his Nob are not valid combinations during the game’s initial “playing” phase.

Both players reveal and score their hands in the same manner, one by one. Then the dealer reveals the four cards in the crib and scores them along with the starting card. Scoring is the same as in the Show, except for the Flush, which must consist of single suit cards.

Besides the standard scoring described above, Cribbage can also be played with additional (optional) rules, including the following:

If either of the players doesn’t claim all their points in any of the turns and the opponent notices it, he can declare “Muggins” and claim the overlooked points himself.

If you beat your opponent by 30 or more points, you’re scoring a “Skunk.” You can also score a “Double Skunk” if you win by 60+ points.

A corner refers to achieving any 30th peg on the board. Three corners mark the 30th, 60th, and 90th peg holes on the board.

When the round has ended and all the scores are counted, shuffle all the cards again and start a new round swapping the role of dealer.

The game continues this way until one of the players reaches 121 points. At that moment, the game ends, and the player who earned 121 (or more) points wins.

How to Play Cribbage – Video Tutorial

Is Cribbage easy to learn?

Cribbage rules are pretty straightforward, so learning to play it is relatively easy. Nevertheless, the game involves several different scoring schemes, which might take a while to get used to. I suggest printing the scoring table out for quick references during the first couple of games.

Is Ace-King-Queen a run in Cribbage?

No. Since Cribbage considers Ace the lowest card and King the highest card, these two cards stand on the opposite sides of the scale and do not constitute a run of consecutive cards.

Can Cribbage be played with three people?

Cribbage is originally intended for two players, but it is not impossible to play it in a group of three either.

The main difference is in the dealing: Each of the three players gets only five cards, plus there’s one face-down card for the dealer’s crib. Each player also discards only one additional card to the crib (instead of two), so the crib’s total remains four cards.

It is also recommended to get a three-track pegboard if you plan to play Cribbage in a group of three.

Other Similar Games to Cribbage (Our Guides)

Looking for more similar games? Check out our guides and instructions for the following Cribbage alternatives:

Read all the articles (17) written by Lucia Fajnerova