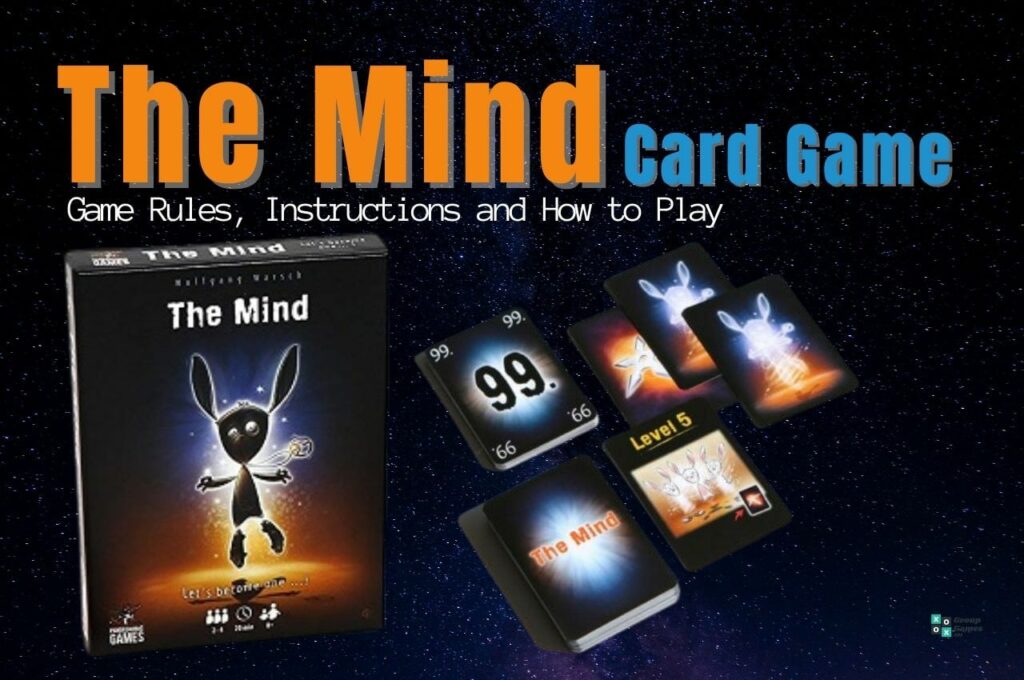 Take a simple concept such as putting numbers in order and remove something important like talking to other players and you’ve got yourself an introduction to the Mind card game rules.

The Mind card game is the ultimate team experience where players need mind over matter. Everyone playing works as one team to successfully order their cards without communicating with one another.

Whether you and your group can pull it off depends on your ability to read others, those who are familiar with the Pinochle rules already could have an advantage with their bluffing skills.

So if you feel like you and your friends and family are up to the challenge, read on to get all the information needed to understand the Mind Card game rules.

What Is The Mind Card Game?

The Mind card game has gameplay that seems easy at first. But after getting through the initial rounds you’ll soon discover it gets much harder very quickly.

Number of Players Required: 2 – 4 players, played in the same team.

Who Can Play It: Tricky gameplay, but recommended for ages 6 and up.

Length of Play: Around 20 minutes.

Main Objective: Work as a team to solve a number puzzle without communicating with one another.

Why we love it: The Mind gives a fresh perspective on family card games where you aren’t actually working against each other. Everyone’s helping each other to succeed. If you’re not into super-competitive gameplay or if you’re looking to work on team-building skills then this is the card game for you.

The Mind card game is like other card games such as Sushi Go Party and Bohnanza in that everything you need to play comes in one game set.

Get yourself a set of The Mind card game, which despite being created in Germany is still available in North America. You’ll see that it comes with the following: The Mind Game
$14.95
Buy Now
We earn a commission if you click this link and make a purchase at no additional cost to you.

If you’re into card games that are faster-paced, however, consider getting The Mind card game Extreme. This follows the Mind Game rules but makes gameplay much faster. The Mind Game - Extreme
$14.95 $14.00
Buy Now
We earn a commission if you click this link and make a purchase at no additional cost to you.

You’ll need a little bit of setup before The Mind gameplay begins. Start proceedings by separating the Star and Bunny cards equal to the number of participants and deal these out.

Separate the different levels of cards and form them into a deck. Make sure that the deck is in ascending order with the top card level 1 and the bottom card depends on the numbers of players playing.

For a 2 player game, the bottom level should be level 12. 3 player game goes to level 10 and a 4 player game to level 8. Put the cards not used back in the box and add the levels you’ll use to the pile with the Star and Bunny cards. Place the cards on a neat pile on the table.

The 100 card pile that has ‘The Mind’ on the back needs shuffling, so do this then set them aside for later use.

The cards included may be confusing at first as the Mind rules are certainly unique, but gameplay will start to make sense as you learn how to play it.

No matter how many players you are playing with, The Mind starts the same way every time although the levels used do differ depending on numbers.

Each player receives Mind Cards equal to the round number. So if the player’s current level is the 1st round, everyone receives 1 card each with the game getting increasingly harder as it goes.

It’s also important that everyone is silent throughout, as the game rules state that players must communicate by hand signals only.

Rounds begin when all players put their hands in the middle of the circle, then take them out to signify that they are ready to begin.

How to Play The Mind Card Game

Once the round has started, the aim of players is to get their cards in their hands in numerical order from 1-100.

For example, if you are playing with 4 players and it’s the first round there will be 4 different numbers that you’ll need to put in order.

Players cannot move on until players complete the correct order of the current level that they are on.

Each player has a Throwing Star or Bunny that they can use at any point during the game. The throwing star gets used so that all players can reveal the lowest card in their deck.

Players need to hold their right hand up or tap the table if they want to play a Throwing Star, but they can only play when all other players also raise their right hand.

The moment a mistake gets made when a card gets played out of the correct order, players need to use a Bunny to regain the team’s life and have another go at that round.

Scoring In The Mind Card Game

As The Mind supports co-operative gameplay there isn’t an official scoring system attached to the game, but the higher the round you get to the better that your team has done.

Once you and your friends or family master the game then you can time each game to see the quickest time taken to complete The Mind.

What are the Mind Card game rules on communication?

The biggest factor to consider in The Mind card game is the level of communication that you allow when playing the game.

Ideally, if you are playing with older kids and adults try to play in complete silence other than sounds like tapping on the table. But relax these rules when playing with kids.

If there is a moment where someone communicates to help another player in a way that isn’t allowed, then a Bunny or life is lost.

As long as players do not reveal the cards that they have is the main communication rule to follow, doing this would ruin the game.

Alternatives to The Mind Card Game

Although The Mind card game is certainly unique in its gameplay, there are other card games that you can play that are also unique too.

As The Mind is primarily a numbers game, have a look at guides to some other unique number-based card games by checking out Nertz (see Nertz card game rules), Hanabi and Racko.

If you’re looking for more traditional card games that use a traditional 52 card deck, then you are also in the right place.

Have a look at guides to Chase the Ace card game and Follow the Queen poker for some simple yet classic games to introduce to your next card game night.

Also check out some of our favorite board games too, with guides to the Clue game rules and the Logo board game rules.