Catch Phrase is a fantastic party game that’s fast-paced, and complete with brain-teasers and gameplay that’s going to have everyone engrossed.

Catch Phrase is similar in nature to the game of Taboo. Players try to give clues and others have to guess the word.

Follow our guide below to learn how to play Catch Phrase.

What is Catch Phrase?

Catch Phrase is a unique word-guessing game that is played in teams. Do you think you have a good perception? If so, this game will test your skills.

Earn seven points before other teams to win the game while ensuring none of your teammates is not holding the game unit. Otherwise, you might lose points.

Number of Players: 4 or more

Why We Love It: Because Catch Phrase is a quick word guessing game with lots of interesting questions and puzzles.

You will only need a Catch Phrase Game unit, a stopwatch or timer and two teams to play this game. You may like to get the Electronic Catch Phrase unit for a better experience, which includes:

Once you are ready with the game unit and teams, you are good to go! 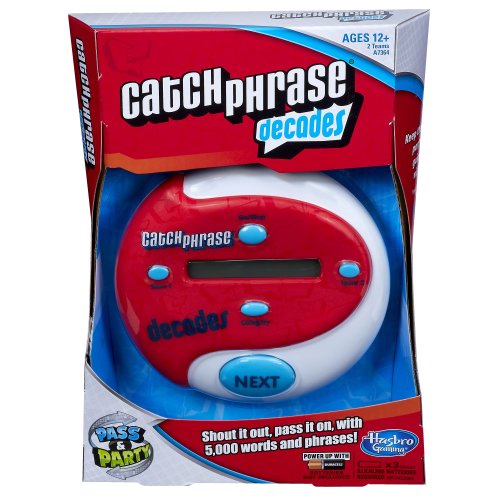 Electronic Catch Phrase
$70.21
Buy Now
We earn a commission if you click this link and make a purchase at no additional cost to you.

Catch Phrase does not need much effort in setting up.

You must gather at least four players to start playing Catch Phrase. Of course, you can play with as many players as you want.

Get the Catch Phrase game unit and timer, reset both teams’ scores to 0 and toss a coin to decide which team goes first.

The opponent team will keep a check on the time and the scores.

Follow these simple steps to set up a catchphrase game without any trouble:

The categories you may choose from are as follows:

The default category of the game unit is ‘Everything.’

Follow these steps to maintain correct scores throughout your game:

Things to keep in mind:

If any player breaks any of these rules, the opponent team will be immediately awarded on point for that round as their penalty.

Divide the players into two teams.

Sit in a circle with alternate players so that each player ends up beside a member of the opponent team. Each player will try to pass the game unit to their next opponent.

Pick a player that will start the game whose team will be number 1. Hand the game unit to that player.

You will have to make your team guess the word correctly by making a gesture or giving them relatable clues.

As soon as any of your teammates have guessed the word correctly, pass the game unit to the opponent on your right.

The round continues like this until the buzzer rings.

Make your team guess all the phrases correctly to earn more points without giving your opponent any penalty points.

Try not to keep the game unit with your team when the buzzer rings. Otherwise, you will lose a chance to earn one bonus point.

The first team to score seven points wins. You will hear a little tune and see the winning team’s number on the screen.

Which is the easiest category in Catch Phrase?

Categories cannot be generalised in Catch Phrase. It will vary from person to person.

It would be best if you chose the category that your team has good knowledge about. Remember, you have to make your team guess the Phrase. Analyse your team properly to identify in which area all the team members are comfortable in.

Choosing the category wisely gives your team an advantage.

Can we play Catch Phrase with more than two teams?

No, the Catch Phrase game unit is set for just two teams. Therefore, you need to divide all the players into two teams.

However, there may be any number of players in each team.

Can we change the category in between a game of Catch Phrase?

No, the category of phrases can be changed only when the timer is off. It ensures that only words and phrases which relate to the selected category.

What happens if we accidentally enter more points to the Catch Phrase game unit?

You will need to reset and re-enter the correct scores if you accidentally enter more points.

Try Cranium Cadoo if you like playing word-guessing games. It is the perfect ice breaker at any party. Make hilarious memories with your friends and family while playing this unique party game.

You might also like Hedbanz, which is quite similar to other charade games but has a great twist. In this game, everyone has to guess what words are on other cards.

We would suggest that you play Taboo next. It is a fun-filled family game that resembles Catch Phrase a lot. This game is harder than regular charades, as there are some extra restrictions to the clues. A list of related terms is given, which you shall not use to make your team guess the puzzle word.

If you’re looking for games to play with groups of friends while you’re away camping, check out our collection of camping games.