Guess Who is a simple two-player board and cards game that is centered around the concept of guessing characters based on their features and appearance along the lines of Q&A rounds.

Although the original owner of this game is the popular American-Canadian toy MNC Hasbro, several quality versions have been developed by other game stores.

Due to the variety in interesting characters, the engaging nature of the game, and the simple Guess Who instructions set, the game has become immensely popular among kids. 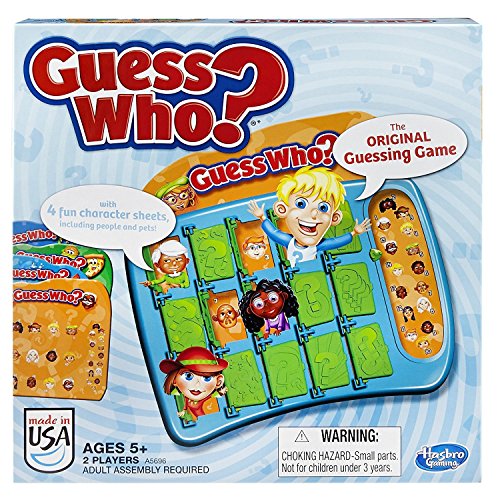 Guess Who
$31.99 $29.00
Buy Now
We earn a commission if you click this link and make a purchase at no additional cost to you.

What is Guess Who Game?

As the name suggests, Guess Who is a character guessing game played with distinctive cards and a board with placeholders. The premise of the game is based on asking the right questions and getting the right answers to guess the characteristic features of the opponent’s mystery card.

Number Of Players: 2 or can be played in teams

Why We Love It: It’s entirely unique! Guess who has the right amount of fun and focus. It keeps us on our toes, scratching our heads through the game and until the end. With some experience, we also master an important craft — getting someone to delve out information important to us!

The Origins of Guess Who the Game

Guess Who can hardly be classified as a board game, but in that category, it easily ranks as one of the favorites of kids and adults alike. This popular game goes back all the way to 1979 when Ora and Theo Coster created the game and launched via the toy giant Milton Bradley.

Guess Who tasted popularity like a thunderbolt, fast and hard, and within three years of its launch, it was introduced to the United Kingdom. In 1984, when Hasbro took over the ownership of all trademark products of Milton Bradley, it became the original proprietor of the game.

Over the years Guess Who’s fandom has grown leaps and bounds and it has become one of the best selling family board games.

Guess Who game requires a specialized game kit which simply needs to be assembled properly.

A typical Guess Who game kit consists of the following components: 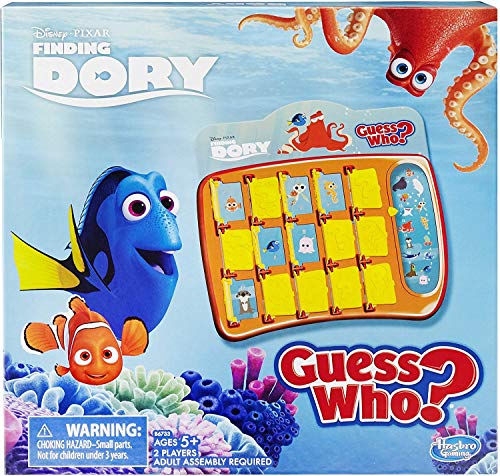 Guess Who? Game: Finding Dory Edition
$44.80
Buy Now
We earn a commission if you click this link and make a purchase at no additional cost to you.

Guess Who Instructions And Game Rules

Guess Who comes with an extremely easy to follow, set of rules, however, acing the gameplay isn’t everyone’s cup of tea. Framing the right question can be tricky initially, but worry not, that’s what we’re here for!

By means of toss or other deciding technique, the players decide who goes first. A player’s turn consists of simply asking a close-ended question or a yes/no question.

The question is aimed at the opponent with the motive to find out a characteristic or feature that resembles their mystery card character. For instance, “does your character have black hair?”. Here, black hair is a feature that you prompt to get a hint about your opponent’s mystery character, which will further help you guess who the character is.

The question cannot be descriptive or open-ended like “what is the color of your character’s hair?”.

Whatever answer the opponent gives, the player uses the hint to flip down character cards on the board, thereby eliminating them from being a part of further guesses.

In the example above, if the opponent replies “no”, the player will flip down all the characters with black hair.

Whether the player is able to get a successful answer (leading to a single character that the player can zero in on) or not, the turn ends there. It is now the turn of the opponent to ask the question.

Both players keep alternating turns until one of them reaches a final card on the board. Their question at this stage is, “Is *name* your main character?”. Since all other alternatives have been eliminated, the opponent’s answer is most likely to be yes.

It’s that final yes that wins the player that round. The score is marked, the cards are reshuffled, both players pick a fresh character, and the next round begins.

The nature of your questions will decide how fast you reach your final guess. Try and ask questions that point out the most common feature among all 24 characters.

If the answer is negative, you will eliminate several incorrect options at once. If the answer is positive, you now have to only ask questions that will distinguish each character in that lot from one another.

Continuing the above example, let’s say 13 of the 24 characters have black hair and only 3 wear spectacles. Your first question should be, “does your character have black hair?” If your opponent’s answer is no, you eliminate 13 characters by flipping them down. You play the rest of the game with only 11 more characters and the chances of winning sooner increase.

If your opponent’s answer is yes, you now have to play only among 13 characters and you can flip down 11. In the next turn, you must ask a question that is based on the most common feature among the remaining characters.

Scoring And Winning In Guess Who

In a typical Guess Who game kit, you get a tray full of pegs. These are used to record the scores and go into the holders towards the top of each player’s board. For every correct guess that you make, or for every wrong guess that your opponent makes, you place a peg into a holder.

There are 10 holders on the board, five on either side of the mystery cardholder. This means a single player has 10 chances to win the game. However, if in case you decide to end the game sooner, the player with the greater number of placed pegs wins the game.

Is It Allowed To Take A Random Guess After Asking A Question In Guess Who Game?

A player cannot take a random guess before or after asking a question in a turn, neither is it recommended. Even when you are sure your guess is right, you have to frame it in the form of a question.

Let’s say you have two cards remaining and you ask a question in your turn. If the opponent’s answer gives away the main character, you will have to wait for the next turn to confirm the same by asking ‘is this your character?’. You cannot make a guess in the same turn.

Can Guess Who Be Played With Two Mystery Cards?

Yes, a more difficult version of the game is played with two mystery cards. You can only win a round when you guess both the characters on your opponent’s mystery cards in the same turn.

Does The Winner Of A Round Repeat A Turn?

Regardless of winning or losing a turn, no one repeats the turn in Guess Who. The questions keep alternating between the two players uninterruptedly.

Guess Who can be addictive for young kids, but they’re kids after all and can easily lose interest and want to move on to another game.

If your family loved Guess Who, you must try out Sequence, another game full of characters. For the love of boards and cards, Beat The Parents is another game that will be a hit among the kids.

Otherwise check out some of our other board games.