A family game that makes lying fun, Fibber is a unique and interesting game that breaks the conventional norms of both, board and card games. It is played with cards, on the board, and among friends and family members of all ages.

What Is the Fibber Board Game?

Fibber is a super fun card and board game that comes with cool accessories which make it more interesting. It is based on popular animated characters that kids identify with and drives on the concept of bluffing, a favorite among adults.

Main Objective: Fibbing tactfully to get rid of most cards and being the player with the least number of noses at the end.

Why We Love It: Fibber is the kind of silly little game you would want to play to have some innocent fun with kids. It’s highly entertaining for children and makes for a decent and fun pass time for adults.

Story Behind The Board Game Of Fibber

Fibber, a game with its central premise revolving around the story of Pinocchio, was created by the developers of the popular game Hedbanz. According to the legendary tale, Pinocchio was a character who always lied, and the more he lied, the more his nose stretched in length.

Keeping this concept in mind, the game developers of Fibber created a bluff game for kids. The idea was to make Pinocchios out of every player by adding noses each time the player was caught bluffing (lying). Over time, several different versions of the game have been developed like Disney Fibber and Liar.

Setting Up The Game Of Fibber

Fibber is a board and card game that cannot be played without the complete game kit. Before we move on to the set up part, let us have a look at what a fibber game kit comprises. 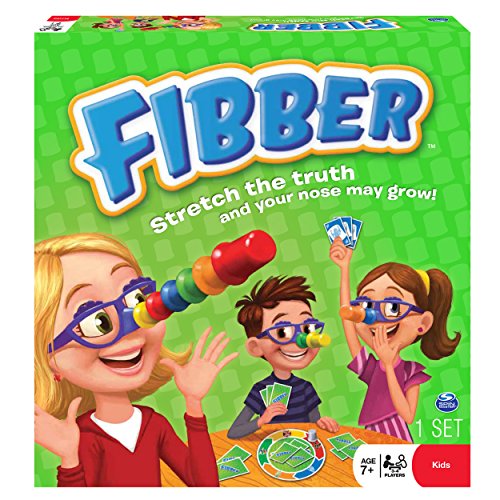 Fibber Board Game
$65.24
Buy Now
We earn a commission if you click this link and make a purchase at no additional cost to you.

As easy as it may seem, Fibber is a game of tactic. Either the best lier wins, or the best lie detector wins. The game rules are consistent with the story of Pinnocchio, as your lies get caught, your nose grows longer.

The player on the left of the distributor of the cards begins the game and it continues in the clockwise direction.

In each turn, a player plays a few cards. Technically Fibber rules dictate that the cards that are played should match the color and character on which the silver nose is placed on the board at that moment. However, that’s where the bluff comes in.

In a single turn, a player can bluff as many, and whichever cards s/he wants. Since the secondary objective of the game is to have the least number of cards in hand, getting rid of many cards with a good bluff can help you easily win the game.

A player must play at least one card in a turn. The card(s) is placed upside down in the center and is not visible to the opponents. Once the card is played, the silver nose is moved to the next character.

Once the cards are placed, the player announces ‘I see *number & character*’. This announcement is what makes or breaks the deal for the player as most opponents make the judgment of calling a fibber or not on the basis of the announcement. The more confident you sound and look, the better the bluff.

For instance, if the silver nose is on the alien and it’s player A’s turn, A is supposed to play all the alien cards in hand, and any more cards that the player wishes to bluff. Let’s say player A has 5 cards in hand; 2 aliens, 2 witches, and 1 dragon.

If A decides to bluff by playing the dragon card along with the alien cards in this turn, the player will announce ‘I see 3 aliens’. The three cards will be placed in the center upside down. The opponents have the chance to call this player a fibber before A moves the silver nose to the next spot.

Calling Out The Fibber

If an opponent guesses that the player is bluffing, they say ‘You are a fibber’. This leads to either of the two scenarios:

The game continues in this manner and the players’ noses keep growing. However, it’s not over until it’s over for the players with longer noses.

If a player gets rid of all the cards in the hand, the player has to remove all the attached noses and can begin fresh. That player gets a sort of a new life. All the cards are then shuffled again and the game restarts, but with noses already attached to the remaining players.

Once all colored noses are used, the player who gets caught lying attaches the silver nose. With this the game ends and the scoring begins. The player with the shortest nose (least number of attached noses) wins.

What Are The Wild Card Rules In Fibber Board Game?

Wild cards can be used in the stead of any character card. Whenever you use a wild card in turn, you are not fibbing. So if your opponent calls you a fibber, that player loses the round and takes the cards piled up in the center.

How To Break The Tie In Fibber?

How To Know If A Player Is Fibbing?

Since the fibbers are not supposed to show their cards when they get caught, it is not possible to calculate or predict your opponent’s cards. But it always helps to keep a track of how many cards of a single character you have, to weigh the chances of a lie being a truth.

Your opponent’s body language, card calling tendencies, and pattern of bluffing will help you best determine if the player is fibbing.

Alternative Board Games That You Must Try

Board games are loved by kids and are popular for good reason. They’re easy, engrossing, and can come in unbelievably interesting varieties. If you like exploring more games, here are some games that can spice up your game nights:

You can start with Beat The Parents; a complete family mood lifter board game. You can then move on to a game that resonates with the troublemakers in the house — Trouble. To experiment and finish the night with something extremely unique, you must try Azul.

And now that you have our guide, you can always bluff your way through a game of Fibber!