Can you hammer away at ice blocks without sending Phillip, the penguin, into the icy depths below? This guide explains everything you need to know for Don’t Break the Ice rules.

Don’t Break the Ice is over fifty years old and still exists in numerous household board game collections. This classic childhood game brings a sense of nostalgia that you can pass on to your children.

This Don’t Break the Ice rules guide will cover the following:

Read on to learn how to play Don’t Break the Ice.

What is Don’t Break the Ice?

Don’t Break the Ice is a classic children’s game where players take turns knocking off pieces of ice without sending the toy penguin falling as well.

Similar to: Don’t Spill the Beans, Kerplunk, Ants in the Pants

Main Objective: Players try to carefully knock ice blocks out of the tray without sending Phil the Penguin into the icy water below.

Why We Love It: This game is quick and easy to learn; you can enjoy playing it immediately after set-up.

A Brief History of Don’t Break the Ice

What You’ll Need to Play Don’t Break the Ice 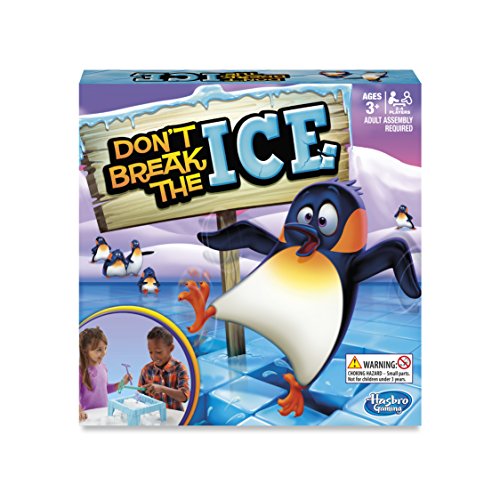 A grownup will need to help set up the game before gameplay.

Turn the tray upside down and insert each of the four legs into the lower corners of the ice cube tray to stand up the board.

Then, while the board is still upside down, insert all 32 ice cubes into the tray, including the large ice cube. The large ice cube can be positioned anywhere among the others.

Now, turn the board over carefully and place Phillip the Penguin on the large ice block.

Each player, or team, takes a mallet and the youngest player goes first.

The first player taps on a single ice cube and must continue tapping until the ice block falls through. Other ice blocks may also fall through during this process.

As long as Phil doesn’t fall through, continue taking turns knocking out pieces of the ice.

Players take turns moving clockwise around the board. Each player works to tap through a block of ice without knocking Phil into the imaginary water below.

If you break the ice and Phillip the Penguin falls through, you are now out of the game. You can reset the ice and allow the other players to continue playing.

How to Keep Score in Don’t Break the Ice

There is no numerical score involved in this children’s game; however, you could always assign your point system to the ice cubes for an added challenge.

The last player remaining without letting Phil fall is the winner!

How to Play Don’t Break the Ice – Video Tutorial

Does Walmart have Don’t Break the Ice?

You can find the Don’t Break the Ice game at Walmart.com and other popular stores.

How do you play the penguins game?

You can find several generic versions of Don’t Break the Ice online today. With similar gameplay and setup, the shape of the ice tray and ice cubes vary.

How many people can play Don’t Break the Ice?

Don’t Break the Ice is designed for two to four players. You can play on teams of two, or everyone can play individually.

Other Games Similar to Don’t Break the Ice (Our Guides)

Looking for nostalgic games from childhood to share with your children? Check out these other classic kid’s games: