If you have ever played pool, you will appreciate a fun miniature version called Carrom. Created over one hundred years ago in the United States, Carrom is now internationally recognized. Continue reading for all the Carrom board rules and instructions.

Opponents strike a token towards a group of smaller pieces to send them flying into one of the corner pockets. Designed for two players or two teams, opponents compete to see who can pocket the queen first in an attempt to win the game.

This Carrom rules guide will cover the following:

Read on to learn how to play Carrom.

The Carrom Company produces a variety of games, including their original Carrom Board Game. The original Carrom board game hosts playing options for a wide variety of classic games such as Checkers, Backgammon, and Crokinole, all in one convenient set.

Main Objective: Use your finger to flick the striker, sending the Carrom men and the queen into the four pockets on the corners of the board before your opponent.

Why We Love It: The Carrom Company cleverly designed a versatile game board that provides many board game options such as Checkers, Carrom, and Crokinole, all in one place.

A Brief History of Carrom

In the late 1890s, a teacher named Henry Haskell wanted to create a wholesome game for young adults to keep them out of pool halls. He soon released the Carrom game board in the United States.

Manufactured originally in Michigan, The Carrom Company has sold games for 130 years. The Carrom board has changed over the years and offers various gameplay alternatives.

Today you can find a variety of apps and internet versions of Carrom to play online. Carrom King, Carrom 3D Game, and Carrom Pool: Disc Game are available for download on GooglePlay.

The International Carrom Federation hosts worldwide tournaments and competitions for those who play Carrom professionally. Players are mainly from Europe, Asia, and the USA when it comes to the popularity and involvement in competitive Carrom board game today.

What You’ll Need to Play Carrom 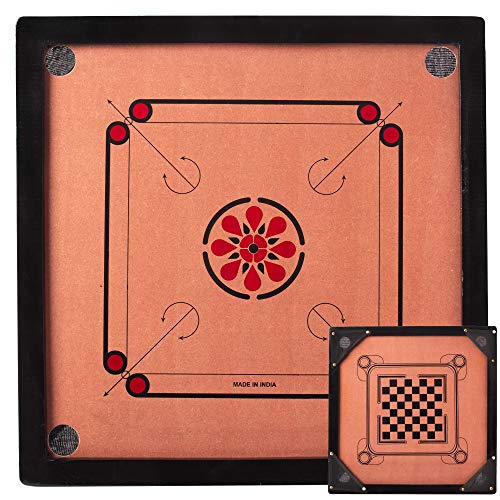 Carrom Board & Checkers Set - Includes 11 Black & 11 Brown Carrom Men Game Pieces, 2 Red Queens, 1 Acrylic Disc & Carrying Case Buy Now
We earn a commission if you click this link and make a purchase at no additional cost to you.

The Carrom board is a square board with a smooth wooden surface and holes or pockets in each corner. The pockets have netting underneath to catch the pieces.

The center of the game board has an inner and outer circle pattern. Lines called baselines run parallel to each of the four sides of the board, creating a boundary for striking.

At each baseline, the intersection is two red circles called base circles. Arrows or foul lines on the board point toward the pockets and help mark the boundaries for gameplay.

The black and white discs or pieces are called Carrom men.

If the pieces are placed correctly, the white tokens create a “Y” shape pointing towards the two upper corners of the board. All pieces should fit within the designated circle markings.

Determine which player will go first. One player or team will play using all nine black Carrom men, while the other player or team uses the white pieces.

The first player begins by placing the striker token along the center of the baselines to prepare for striking.

You can place the striker on the red circles on the sides of the board, but it must cover the circle completely. Otherwise, do not let the striker touch the circles at all.

First, flick the striker towards the center of the circles to break. From this point on, each player will attempt only to strike their specific color of Carrom men trying to get them into the pockets.

Players alternate taking turns, but they get to strike again if a player can pocket a piece.

Once you have pocketed at least one of your Carrom men, you can also try to get the queen into a pocket. When this occurs, it is the player’s responsibility to immediately pocket another one of their pieces to cover the queen.

The queen must be placed back on the board if the player cannot achieve this.

If you can pocket the queen and one of your Carrom men simultaneously, then you do not have to return the queen as you have met the criteria needed to cover the queen.

The following situations are considered fouls throughout gameplay:

If a foul occurs, the round ends immediately, and a pocketed piece is placed back on the board inside the large circle.

If a penalty occurs before any pieces are pocketed, the penalty will be owed at a later time when pieces become available before the end of the round. If penalties are forgotten by the start of the next round, the penalty is lost.

The following actions are cause a player to lose their turn:

How to Keep Score in Carrom

At the end of the game, the winner claims one point for each opponent’s pieces left on the board. The player who could cover the queen correctly earns an additional five points.

Since the Carrom board game is over one hundred years old and played internationally, you will find some variations based on the location and formality of the gameplay.

For example, you can play a three-player game of singles, no teams. In this game, players are not assigned a specific color of Carrom men. Everyone just earns points as follows:

The first player to reach 29 points is the winner.

There are also many people who play competitive Carrom in tournaments around the world.

Carrom is played tournament-style in many parts of the world. You can find Carrom Laws specified by gaming federations in India, America, and Australia.

According to the Indian Carrom Federation, specific requirements are mandated for competitive play:

The players also must use an official scorecard that lists the points earned for each round. They list each player’s name, the date of the event, as well as who won the coin toss enabling them to strike first.

The scorecard requires the signatures of the players and umpire at the end of the game. This can be an easy way to record scores and ensure that players are unable to dispute the outcomes at a later time.

These regulations may vary from country to country, however, the International Carrom Federation maintains international rules and policies for gameplay in tournaments and events across the globe.

How to Play Carrom – Video Tutorial

What is Carrom called in English?

In English, the word Carrom simply means strike and rebound. The Carrom game originated in the United States and is a cross between a board game billiards and shuffleboard. You can find the game internationally as Karam, Carrum, or Carum.

Is Carrom popular in the USA?

Interestingly enough, this American-made game is popular worldwide, especially in the Far East and Asia. Tournament play and The Carrom Company’s “Unplug the Kids” campaign in 2014 helped to promote the Carrom game in the United States.

Yes, also known as Finger Billiards, Carrom is similar to a miniature table-top game of pool. You can use cue sticks or your fingers to play this “strike and pocket” style game. Players attempt to pocket one of their Carrom men and then pocket the queen token to earn points.

Is Carrom a sport?

Carrom is not considered an athletic sport but rather a board game. It is played competitively all around the world. Carrom is a popular game in India and has its own international federation rules that apply to worldwide championships and tournaments played by professionals.

Other Games Similar to Carrom (Our Guides)

Check out these other classic games on your next family game night!