One of the oldest known board games to date, Mancala, is a strategy two-player game that requires the movement of stones or beads around a board made from wood or clay. The Mancala game rules may appear simple, but there are many variations.

The strategy involved in playing Mancala is often compared to that required to play Chess successfully. Read on to learn the Mancala game rules and how to play.

This Mancala rules guide will cover the following:

Read on to learn how to play Mancala.

The ancient two-player strategy game, Mancala, requires both players to move glass or plastic beads around a wooden tray to collect the most.

Main Objective:  The main objective is to capture the most stones from your opponent by the end of the game.

Why We Love It: This “count and capture” game allows players to develop strategic thinking, but it is also portable and easy to play anywhere.

A Brief History of Mancala

The Mancala game is thought to have derived from the Egyptians centuries ago and is historically found most commonly in areas of Southern Asia and Africa. The term Mancala is derived from the Arabic word, manqalah, meaning to move.

According to Merriam-Webster’s definition, Mancala now refers to any variety of similarly played games that involve the distribution of pebbles or stones between two players into holes or pockets.

During its early development centuries ago, Mancala was possibly played using seeds or rocks and by digging small holes in the ground instead of using a hand-made board.

What You’ll Need to Play Mancala 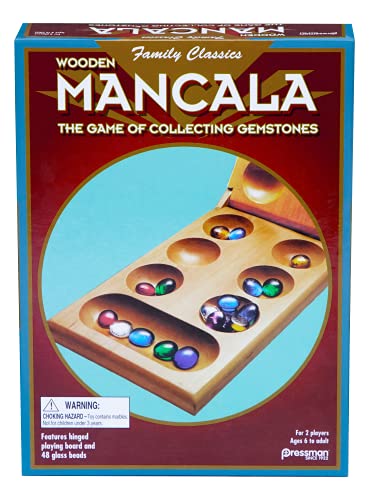 Pressman Mancala - Real Wood Folding Set, with Multicolor Stones by Pressman
$11.99$9.99
Buy Now
We earn a commission if you click this link and make a purchase at no additional cost to you.

Begin set up by placing the wooden board horizontally between both players.

The two larger pockets on either end of the board are called mancalas. Players own the mancala on the right-hand side of their row.

Decide which player will go first. Then, they can begin by collecting all four stones in any one of the pockets on their side of the board.

Next, moving counterclockwise from the pocket selected, deposit one stone in each space until you have moved all four stones. Do not place stones in your opponent’s mancala.

You can take another turn immediately if the last stone you drop is in your mancala. If you drop the last stone in an empty pocket on your side of the board, you collect that stone and any stones in the pocket directly across.

Place captured stones in your mancala.

How to Keep Score in Mancala

At the end of the game, the player with the most stones collected in their mancala wins the game!

How to Play Mancala – Video Tutorial

Is Mancala the oldest game in the world?

Archeologists have found evidence to support the theory that dates Mancala back to East Africa 700AD. Some believe that the game was brought to Africa by Arab travelers, though historians still question the exact origin of the first Mancala game.

Is Mancala a hard game?

Mancala is relatively easy to learn regarding rules and directions; however, the strategy and forethought necessary to win require more skill.

Mancala is one of the oldest known games played centuries ago; however, it is still played in countries worldwide, including the United States. You can use egg cartons and beans to create your own game of Mancala at home. The Mancala game is available online today.

Other Games Similar to Mancala (Our Guides)

Check out these other fun games if you enjoy playing classic two-player strategy games like Mancala!

Read all the articles (33) written by Andrea Huguley