Possibly the oldest board game in the world, Go was first played in Eastern Asia and known around the world by many names such as Go, I-go, Weiqi, Baduk, or Pa-tok.

Over the centuries, Go the board game became increasingly popular for its 2-player strategy as players compete to claim the most territory and capture as many stones possible throughout the game.

This Go Board Game rules guide will cover the following:

Read on to learn how to play Go.

Go, the board game is a two-player strategy game that uses white and black tiles to claim territory and make captures on the grid-like game board to earn the most points.

Main Objective:  Earn the most points to win by controlling territory and capturing stones from your opponent.

Why We Love It: Anyone up for a challenge will surely enjoy Go! With minimal setup requirements, this game is easy to grab and “GO” and play anywhere, anytime.

A Brief History of Go

One of the oldest known board games, Go, originated in Eastern Asia. This two-player abstract strategy game was played in schools in Japan and spread globally after World War II.

Today, several federations, including a Japanese Go Association and a European Go Federation, facilitate tournaments, rules, and ranking of professional and amateur players.

What You’ll Need to Play Go 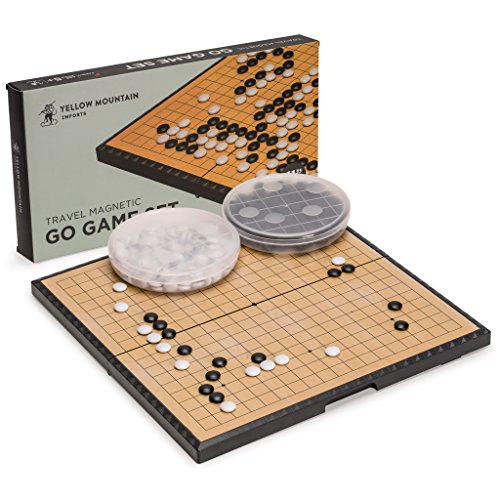 Go Game Set Board (11-Inch) with Single Convex Plastic Go Stones
$22.99
Buy Now
We earn a commission if you click this link and make a purchase at no additional cost to you.

Set up the game board between you and your opponent. Go is traditionally played on a 19 x 19 grid; however, it is possible to play on a smaller grid.

Beginners are encouraged to start playing by using a 9 x 9 grid.

The stronger player takes all the white stones to use, and the weaker player collects the black stones. The player using black stones plays first, then turns alternate between both players.

The first player starts by placing one of their stones on any grid intersection.

If you cannot play a stone, you may hand a stone over to your opponent. When a player gives a stone to his or her opponent two turns in a row, the game ends.

Intersections: Every crossing of lines on the grid, edges included.

Liberties: Intersections both above, below, and on either side of an existing stone.

Strings also have liberties; the intersections directly around the stones and many clusters of strings in the same area are called a group.

When all liberties surrounding a stone of a color are occupied, a capture can take place. Stones of the interior color are captured and taken as prisoner.

You cannot place a stone into one of these positions, meaning you cannot put yourself directly in the position of a capture.

You can, however place your stone into a position with no liberties if you have the ability to also capture one of your opponent’s stones.

If there are two vacant intersections within a string or group are called eyes. A group of stones with two or more eyes is permanently safe from capture. These clusters of stones are called Live strings or live groups.

If there is a string of stones surrounded by enemy stones and unable to make two eyes, is called a dead string. If both players are aware that the string is “hopeless,” players are not onligated to complete the capture of these stones. Leave them until the end of the game.

Sometimes a pattern of stones exists where a capture and recaputre could happen infinitley. To prevent this, a player cannot complete the recapture of the stone until another play has been made elsewhere on the grid.

When you are no longer able to play a stone, capture a stone, gain or reduce territory, you are forced to pass by giving one of your stones to your opponent. 2 consecutive passes signals the end of the game.

Now that the game is over remove all hopeless strings from the board as prisoners.

Since black is the first player to place a stone, white must be the last to play before the game ends. This is also true if there are any discrepancies after the game ends, and both players can make more plays to try to resolve the dispute. These plays will not affect the score.

How to Keep Score in Go

Both players now count up each stone within their territories, the number of prisioners captured, as well as komi points (white only). The player with the highest score wins the game!

There is a handicap option available at the start of the game for any player who may need a head start or a slight advantage.

When using this play, black can place up to nine stones on the board as their first move.

Imagine the position of dots on a die. The stones must be placed strategically on the board in the same formation as the dots would be on a die for any number 2-9. Number 3 is the exception because it forms an L-shape on the grid instead of three in a row diagonally.

Playing black gives a natural advantage in the game of Go, because this player goes first, but when black uses the handicap to play multiple stones at first, this player really gets a significant advantage.

In games of equal strength, additional points called Komi are given to white at the end of the game to balance out the unfair advantage the other player has. 7 points added for Komi is standard.

How to Play Go – Video Tutorial

Is Go the hardest board game?

Go is thought to be one of the oldest known board games, and due to the strategic nature of the game, it is often considered challenging to play. Professionals play Go around the world in tournaments, and today, you can compete against a computer version of Go online.

Is Go harder than Chess?

The board game Go may be more complex than Chess in terms of the strategy needed to win. However, Chess seems more complicated to learn because each piece is different and moves differently on the board.

Other Games Similar to Go (Our Guides)

On an abstract strategy playing streak? Challenge your opponents by playing these other competitive board games.