If classic trivia games like Trivial Pursuit are your all-time favourite pick, you will undoubtedly find this fast-paced, quick-thinking game Name 5 very entertaining.

Name 5 game rules demand some quick wit and can get quite competitive like the 5 Second Rule. It’s slightly different from Hedbanz, which also encourages on-the-spot prompt thinking, but in Name 5, you don’t guess the answer. You have to be sure.

It would be unfair to judge this game by its name like a book by its cover. The game is entirely based on your knowledge of a wide range of topics – some very specific like Beatles albums, some random like Drinking salutations. Under the timer ticking, it can be quite tricky to finish the Name 5 challenges.

Main Objective: Name five things related to the category in the cards and reach Name 5 space first to win.

Why We Love It: Naming 5 things may sound very easy now, but when you have to think faster under a 30-second timer you will tend to miss one last name. That makes it even more exciting and challenging.

A Brief History of Name 5 Game

The board game publisher Endless Games is quite famous for recreating game shows and classic old games. Name 5 is one of their original party trivia games, published in 2009, designed by Brian Turtle.

You simply need to grab a complete game kit of Name 5 – Quick Thinking Game. You can expect the following game components in this kit:

If you are a board game enthusiast, this kit could be a great addition to your collection and uplift your family game nights’ mood. 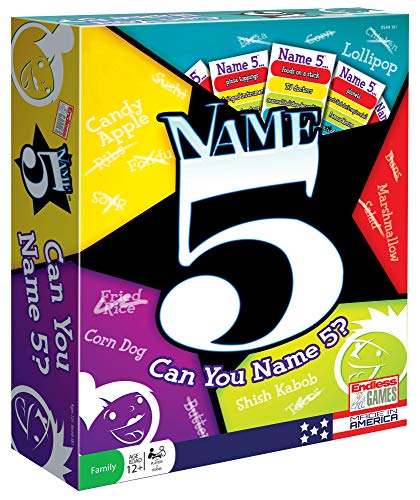 Name 5 - Quick Thinking Game
$19.99$13.69
Buy Now
We earn a commission if you click this link and make a purchase at no additional cost to you.

Name 5 is usually played between two teams (with 2-3 players in each). Individually 2 players can also play as opponents.

Place the board and put your pawns on the starting point. Shuffle and divide the cards into two piles and put them face down in front of each team or player.

The team with the youngest player takes the first roll.

It’s not really challenging to get accustomed to the Name 5 game rules. Here’s what you do:

The team who is going first rolls the die and moves their pawn x number spaces on the board (x being the no rolled on die). Next, a team member picks a card and reads the Name 5 category corresponding to the color of the space where their pawn landed.

Now the timer is on and the team has 30 seconds to name 5 things in that category.

If they mention names that are not directly related to the topic, they can explain their answer to convince the opponent within the time limit.

How Turns Shift between Two Teams:

If the first team can successfully name 5 things, they get to take the next turn again. They roll 5 consecutive turns unless they fail in any attempt. In that case, the turn will pass to the other team. For each turn, they play a different card.

And if they complete 5 turns, the game automatically shifts to the opponent team.

Unique Spaces on the Game Board:

There are 4 special spaces on the board that change the Name 5 game rules to some extent. These spaces include a special set of rules :

The All play symbol features two colors beneath it. When a team’s pawn stops at All play space, they choose a color from these two and the other team plays corresponding to the other color. Colors are chosen before seeing the card.

Now one player from each team silently reads the card. When the timer is on, they announce their categories to the respective team members. Both teams go at the same time and the first one to complete the Name 5 challenge wins the next turn.

The team that lands on a Flip flop will draw a card and read the Name 5 challenge that matches the color of the Flip flop space. Now each team has alternatively 10 seconds to name one item in that category. When one team fails, the other team rolls the next die.

It’s important to keep notes of the items so that no repetition occurs.

This space is almost like any other, except that when a team stops at a Wild space they can read all the categories and decide which Name 5 challenge they want to take.

Similarly, in Double down, a team can look up the card and pick two categories to name 5 items in 30 seconds.

Towards the end of the game, your team has to roll a specific number (exact count) to reach the Name 5 space. If you roll a higher number, you stay in the same space and play a card corresponding to the color of that space. Succeeding this, you can take another turn.

When you roll the exact count, you reach the final challenge of the game.

For this challenge’s first attempt, the team will get 90 seconds to name all 5 categories of their card. If they succeed, they win. If not, in their next turn they have to complete 4 out of 5 categories. This way, in the third attempt it’s 3 challenges in 60 seconds, in the fourth attempt 2 challenges in 30 seconds and finally, it’s one challenge in 30 seconds.

Both teams will take these turns alternatively. The first one to complete the final challenge wins.

Do the questions suit adults as well?

Is it a must to play in teams?

It’s definitely more entertaining when played in teams. But two people can play one to one as well.

How long is the timer for Name 5?

If your family enjoys engaging, quick wit board games and guessing games, you can look through some suggestions we have.

Classics like Guess Who, Hedbanz never go out of our quick picks. Already played and loved them? Try out the 5 Second Rule then – a hit on your next game night.

You can also check out our favorite list of 45 Fun Indoor Games for Kids.