If you’re after an easy-to-play game for both card and roleplaying fans alike, check out the Spyfall game rules for potentially the ideal game for you.

The objective is simple – catch the player posing as the spy. To do this, players ask thoughtful questions to work out who the spy is while the spy gives devious answers to avoid detection.

Spyfall is also an excellent way to work on different skills like acting and bluffing.

At times these skills learned while playing can come in handy with other card games too.

So if you like the sound of Spyfall and would like to learn the game rules, continue reading our comprehensive guide, which includes everything you’ll need to play.

Spyfalls gameplay has a simple premise but is very player-driven, meaning that success largely depends on the ability of the participants playing the game.

Aimed at a slightly older audience than other card games such as Go Fish or board games like Hi-Ho-Cherry-O, Spyfall may be a bit too involved for younger players, but teenagers and older should enjoy this one.

Who Can Play It: Recommended for ages 13+.

Main Objective: Whoever is the spy needs to avoid getting exposed until the end of a given round, or they need to identify another spy’s location. The non-spy needs to detect which players are the spies and expose them.

Why We Love It: Spyfall is a game that allows players to live out their dreams of being a spy without the necessary training and danger. If you and your kids are also into acting or role-playing, this game will definitely test those skills.

Like any good spy, you’ll need to be well prepared before you begin, and fortunately, we have precisely all the gear needed for a successful mission below.

Get the official Spyfall card game which will provide you with the following:

If you’re looking for more Spyfall action and already own the base game, consider getting the Spyfall: Time Travel game. 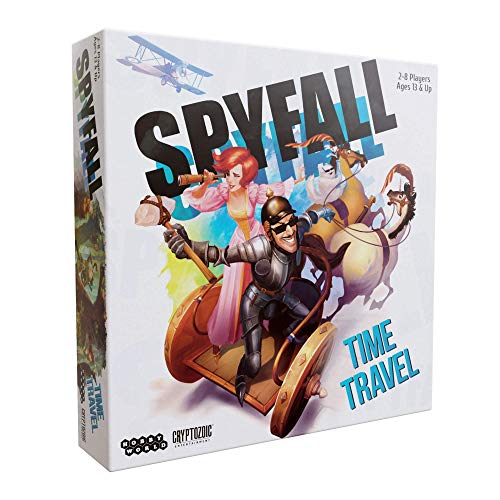 Spyfall Time Travel - The Perfect Party Game - Go to the Past and Future to Find the Spy - For 2 to 8 Players - Board Games for Teens and Adults - Ages 13+
$24.99
Buy Now
We earn a commission if you click this link and make a purchase at no additional cost to you.

How To Set Up Spyfall

To start, sort the cards into location decks. Each location deck should include 7 cards that have exact instructions and 1 spy card.

Place each deck into a separate ziplock bag with all cards face down and the spy card on top of the deck.

Gather players around into a circle. Make sure that everyone is sitting in a place where they can easily hide their cards.

The key to Spyfall is learning how to bluff and having a solid poker face – It’s a great bridging game for you to learn skills that are good for classics like poker.

Before the game begins, agree with the other players on how many rounds the game of Spyfall will last. Select the first dealer by agreeing with the group who the most suspicious-looking player is.

The dealer takes all 26 ziplock bags, moves them around without looking, and picks one of the zip locks at random.

The dealer then removes the cards from the chosen ziplock bag. They need to be careful not to turn them over to reveal to the other players.

The dealer then shuffles the number of cards equal to the number of players – so if there are 6 players, 2 cards that aren’t the spy card get removed from the game.

These cards then get handed out, with 1 player getting the spy card and the rest getting location cards. At this point, everyone keeps their card a secret.

When the round begins, the player who is also the timekeeper starts the stopwatch.

The goal for players is to work out who in the group is the spy based on the answer that each player gives to other players’ questions.

All players bar 1 get given a location card, which says where that player currently is and their role or occupation.

For example, a player may have the location of a supermarket and a role or occupation of a cashier.

Players need to play the role which is on their given card and answer questions as if they are that particular character.

Starting with the dealer, that player asks another person in the circle a question relating to the current location. An example is ‘(Player Name) what are you buying at the supermarket?’.

The player’s answer then either helps or hinders the other players into working out if they are the spy for that round.

Once answered, the player who has just responded to the question then gets to ask another player a question of their own. They cannot ask the player who just asked them, however.

The player with the spy card isn’t provided with the location of the round, so this is the way that the others work out who is posing as the spy.

The spy aims to work out the player’s location based on the questions and answers that other players give.

Players get a score depending on how they perform during the round. Scores are also decided once the round ends.

The round ends when 1 of 3 things happen:

Whicher player or player who gains the most points after the pre-agreed number of rounds up wins the game.

What are some good questions for players to ask during Spyfall?

The key to winning at Spyfall is the quality of the questions that you ask the other players, plus avoiding detection or suspicion in the answers.

Questions such as ‘What are you doing at this event?’ for example, they are open enough for players who know the location to give a broad answer but can also trip up the spy.

However, if the question is too broad, then the spy can easily answer without arousing suspicion. Too specific, and you might let the spy work out the location.

What do the Spyfall game rules state about role-playing?

Although role-playing is strongly encouraged in Spyfall, it isn’t necessary for players to do it if they don’t feel comfortable doing so.

Players can give answers without being too invested in their given characters. The game’s difficulty can vary depending on how committed to the role everyone is, which is worth keeping in mind.

Spyfall is a great card game to play with your friends and family as each round is vastly different from the others, which gives the game real replayability.

For more guides on card games that have replayability, be sure to learn the Saboteur rules and the Mind Game Card game rules as well.

If you like the classics, which need a standard 52 card deck, then have a look at the Palace card game rules and the Tripoley rules for guides on 2 easy to learn games that’ll keep everyone entertained for hours.