Prove that you’re the ultimate Disney fan by first learning how to play Pictopia and then beating your friends and family in this game of trivia.

Pictopia is a simple game that is a must-have for anyone who claims to really know their Disney stuff; Disney’s Pictopia’s questions are challenging enough to put this to the test.

Age doesn’t matter when playing, so be sure that you gather any Disney fan you know regardless of age and continue reading to teach yourself how to play Disney’s Pictopia.

Disney’s Pictopia is a Disney-themed board game where players answer Disney questions to progress towards the castle in a quest for victory.

Like the Eye Found It card game, the game is ideal for not just kids but also fans of any Disney product.

The questions are far-reaching and diverse, covering many different films and TV shows.

Number of Players Required: 2 – 6 players or play in teams.

Who Can Play It: Recommended for 7+.

Main Objective: Correctly answer questions to move forward on the board. The first player or team to get to the castle wins.

Why We Love It: If you’re the ultimate Disney fan, then prove it with Pictopia. The themed questions are so that any age can answer as long as they watch Disney films.

Everything you’ll need to play Disney’s Pictopia comes in a handy set. This set includes: 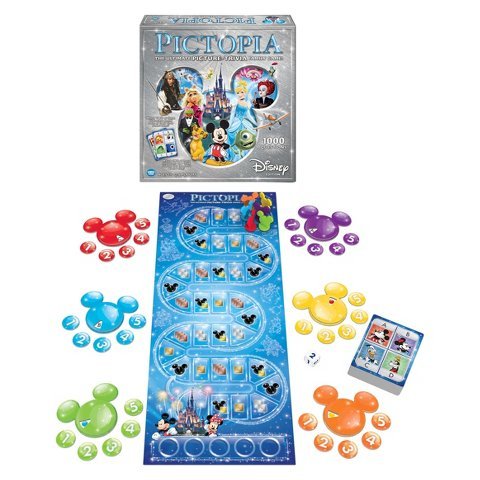 Disney New Pictopia Family Picture-Trivia Game
$42.99 $40.35
Buy Now
We earn a commission if you click this link and make a purchase at no additional cost to you.

Alternatively, you can buy Pictopia Star Wars edition if you’re and the people you play board games with are more of a Star Wars fan.

Once you’ve learned how to play Disney Pictopia, the Star Wars version rules are the same, so you won’t need to know 2 sets of rules if you would like both. 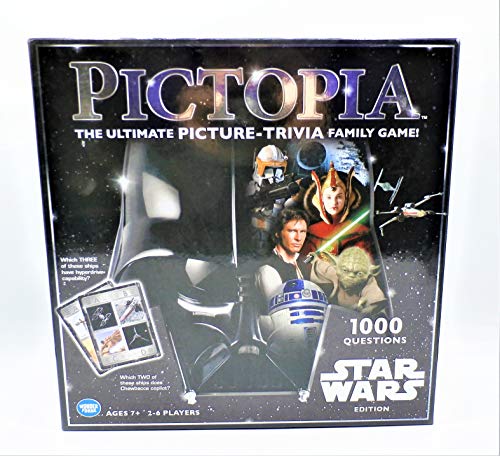 CGI The Ultimate Picture-Trivia Family Game
$22.00
Buy Now
We earn a commission if you click this link and make a purchase at no additional cost to you.

How To Set Up Disney’s Pictopia.

Begin setting up the game by placing the game board in the middle of the players.

Shuffle the decks of cards and place them next to the board faced down so that the 4 large pictures are facing upwards.

Each player then needs to pick a game piece and which color they would like to be.

The choices players can choose from include red, purple, blue, yellow, green, and orange. Place these on the starting tile on the game board.

Players will also need to grab an answer dial and 5 wager tokens that match the color of their game piece.

Fortunately, you don’t need to be a massive Disney fan to be able to learn how to play Disney’s Pictopia. The questions are multiple-choice, which gives everyone a chance.

Start the game by any metric that works for you and your family.

A good idea is usually to have the youngest start, but this isn’t how you have to if you have an alternative way.

The gameplay moves round in a clockwise fashion with the person asking the questions. So the player to the left of the starting player will be the next person to ask a question.

Players each have an answer dial which they use when answering an Individual Question. The player answering turns their dial to the letter which corresponds to the letter on the card, between A and D.

The wager coins are also numbered between 1 and 5. These are for players to use after they’re shown the picture on the card but before any answers get given.

If the player feels confident they know the answer, they wager 5, and no confidence wagers 1 with everything in between.

Whoever is the host starts by rolling the dice.

How to Play Disney’s Pictopia.

The host moves their game piece equal to the number that they rolled on the dice. They will land on a space that has a symbol that has 1 of 5 types of questions to answer.

The host then picks up the card. All other players need to look at the pictures on the next card before the next card gets read out and places a wagering token on the allocated place at the bottom of the game board.

The number that gets picks on the wager token represents how many spaces that player can move if they’re correct. Make sure players place these face down so that they do not reveal what their wager is.

There are 2 different types of questions, Individual Questions and Group Questions.

Once the host asks the question, they reveal the answer on the card. Any players that are correct can flip over their wager token to reveal how many spaces they move.

All wager tokens get placed onto a discard pile at the end of the round. Once all players have used up their 5 wager tokens, they get them all back to reuse.

After all, players move their tokens to the correct number of spaces on the board, the player to the left of the host begins their turn as the host.

Group questions are where all the players (except the host asking the question) can work as a team to figure out the answer.

The group questions are either the ones with a single gold star (pick 1 answer), 2 silver stars (pick 2 answers), or 3 bronze stars (pick 3 answers).

The individual questions come in 2 categories, Solo Pick 1 and Spotlight.

In Solo Pick 1, each player apart from the host needs to simply reveal what they believe the answer is on their answer dials.

Spotlight, however, asks a specific player a personal question about their opinion on either the characters, story, and other players.

Once the question gets read out, the chosen player chooses the answer they like the best on their dial, while the other players try to guess what answer they will choose.

Players move along the gameboard by rolling the die as host or correctly answering questions until they reach the castle space.

A player who isn’t in the castle space acts as host to read out a Solo Pick 1 question for players to answer.

If players are incorrect, they must follow the game arrow to go backwards back onto the board. Play then continues.

Players who answer this correctly, however, win the game!

If you’re planning on playing multiple rounds, it would be a good idea to allocate points to first, second and third. Continue the game until third place gets decided.

This way, you can tally up all the points at the end to see who the champion of Disney’s Pictopia is.

What do you do if you’ve run out of cards to ask players?

It’s unlikely that you’ll run out of cards when playing, but it is possible to remember the answers to questions if playing this game over a long period of time.

If this happens, try to get players to make up their own questions with 5 possible answers when it’s their turn to host.

What happens if 2 players doing the Final Challenge both get the answer correct?

In the Disney Pictopia game rules, it states that both players take the victory in this scenario.

However, if your group does not want there to be more than 1 winner, keep asking questions until you find a winner.

Disney’s Pictopia is definitely a game that will entertain the kids, especially those who are particularly fond of Disney.

For more board games that are ideal for kids, then check out Trouble (see our Trouble rules guide) or Beat the Parents (Beat the Parents rules) for games perfect for those inevitable rainy days.

If you’re after guides on fun kids games to play, be sure to have a look at the Hot Potato game or the Twister game rules for games that encourage kids to be a bit more active.