Designed based on a European game, Halma, Chinese Checkers follows similar gameplay as players compete to move all their game pieces across the board into the opposing triangular section.

This Chinese Checkers rules guide will cover the following:

Read on to learn how to play Chinese Checkers.

What is Chinese Checkers?

Chinese Checkers is an abstract strategy board game. Players must move their color pegs across the game board before their opponents to win.

Main Objective: Move all your pegs across the board first to win!

Why We Love It: When it comes to strategy board games, Chinese Checkers is a fairly easy game to learn, and it can be played by a group of 6 people simultaneously.

A Brief History of Chinese Checkers

Derived from a checkers-style board game called Halma around 1880, Chinese Checkers became popular in the United States in the 1930s.

Halma, meaning jump in Greek, was designed with a square-shaped board composed of smaller square spaces.

Chinese Checkers differs in the star shape of the board and the use of marbles, or pegs, for the game pieces. 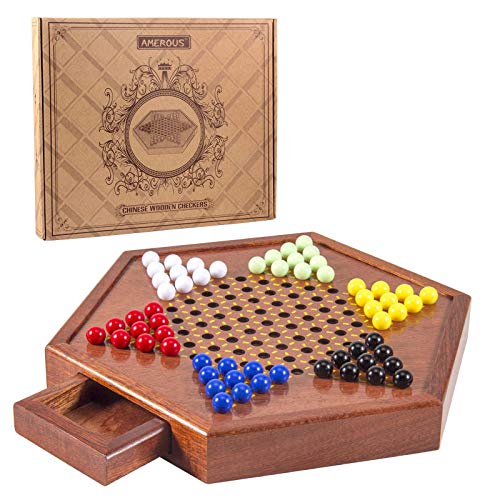 AMEROUS 12.5 inches Wooden Chinese Checkers Set with Storage Drawer - 60 Acrylic Marbles in 6 Colors
$25.99 $20.79
Buy Now
We earn a commission if you click this link and make a purchase at no additional cost to you.

Set up the game board in the middle of your playing area. The game board is beautifully designed with evenly spaced rivets forming a star shape on the board. Each of the six-star points, or triangles, makes up the starting and ending places for the pegs.

Depending on your specific game board, the pegs or marbles will fit perfectly into the rivets on the board.

The triangle spaces are colored differently, and depending upon the number of players, you will need to position your marbles accordingly.

Each player selects a color of marbles to use and places them on the pegs in the corresponding triangle on the board:

Decide who will play first. Play then continues clockwise around the board.

Players must move one of their pegs to an adjacent space on their turn.

As long as you move in a straight line, you can hop over a peg to a space and make multiple hops in one turn when possible. You can jump over your peg or that of another player.

You can even change directions when making multiple hops, but you cannot hop to the side of a peg.

You cannot hop over a series of two or more pegs per jump. However, you can move in any direction.

Do not remove pegs from the board during the game.

Once you can move a peg across the board into the safety of the opposing triangle, the peg may not move.

Players can only land pegs in their starting or ending triangles.

You can enter or hop through another triangle if you do not end your turn in that space.

If you take the time to consider your board, look at all possible options when making a move.

For example, if there are single spaces between multiple pegs in a row, sometimes referred to as a ladder formation, utilize the set-up to jump over many pieces making your way across the board in a single turn.

How to Keep Score in Chinese Checkers

The first player to successfully move all their pegs to their opposing triangle wins the game. There is no numerical scoring system in place for Chinese Checkers.

A player can still win even if another player’s peg is inside their triangle.

As long as all the available spots are filled with your pegs, you can win the game!

What is the best opening move in Chinese Checkers?

The Sidewinder is an opening move best known for moving one of your front corner pieces diagonally out from its starting position. Moving this peg out of the way helps by making room for future moves as well as inching the piece closer toward the opposite side of the board.

What are the rules of Checkers?

In the traditional game of Checkers, players can only move their pieces forward in a diagonal direction on black squares toward their opponent. You can jump over your opponent’s pieces to capture them. The player to capture the most pieces wins!

What directions can you move in Chinese Checkers?

In the Chinese Checkers game, players can move their pegs in any direction as long as it is in a straight line to an adjacent spot. You can change directions mid-move when jumping over pegs if you continue moving in a straight line.

Other Games Similar to Chinese Checkers (Our Guides)

If you like Chinese Checkers, these other strategy games are a must for your next game night!