Played in 10 rounds, players take turns building domino trains by matching the number of pips between connecting domino tiles. What makes this game unique is that new “trains” are formed by creating three new branches, which end up looking like a chicken’s foot.

This Chicken Foot game rules guide will cover the following:

Read on to learn how to play Chicken Foot Dominoes.

What is Chicken Foot Dominoes?

Chicken-Foot dominoes is a variation of the traditional “trains” Dominoes game. Players must build from each other’s tiles by matching the number of pips from one tile to the next.

Main Objective: Be the first player to end the game with the lowest number of pips possible.

Why We Love It: Dominoes is a classic game enjoyed by people of all ages. Not only is it easy to learn, but it also requires very few components. As long as you have a set of Dominoes and a flat surface, you are ready to play!

There are several variations of Dominoes, including Mexican Train Dominoes and Maltese Cross Dominoes. Some believe that the Chicken Foot version originated in Texas or Mexico around the late 1980s.

Played with as few as two people, Chicken Foot Dominoes is more enjoyable with a group of 4-8 players.

Everything you need to play comes included in this dominoes set. 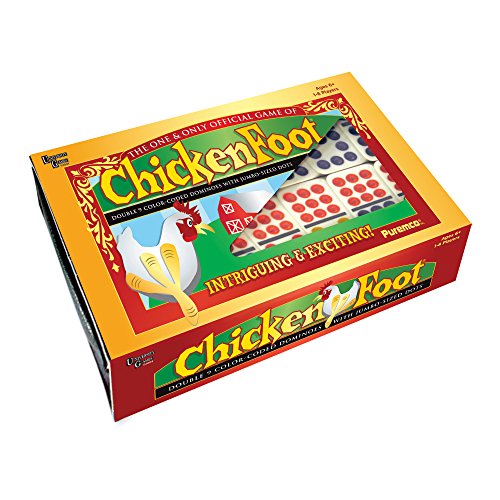 Puremco Chicken Foot Dominoes Game with Box, Dominoes (Size-1055)
$29.20 $27.00
Buy Now
We earn a commission if you click this link and make a purchase at no additional cost to you.

You may wish to purchase a domino rack to make playing more manageable, but it is not required for gameplay. 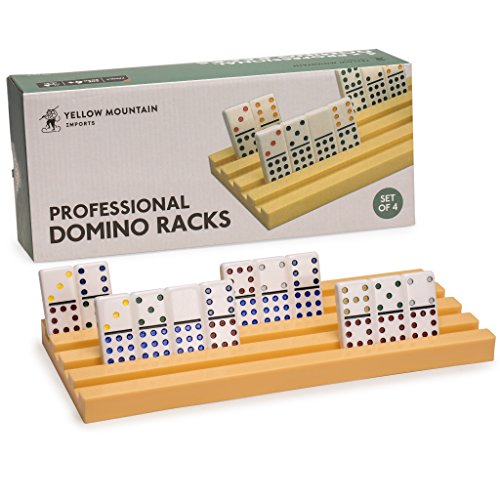 Yellow Mountain Imports Domino Racks/Trays for Chicken Foot, Mexican Train, and Domino Games - Set of 4
$17.18
Buy Now
We earn a commission if you click this link and make a purchase at no additional cost to you.

To begin, turn all dominoes face-down and mix them up. Players draw dominoes for their hands based on the number of players:

After drawing hands, move the leftover dominoes off to the side of your playing area. This space is called the chicken yard.

To start the game, each player looks at the dominoes in their hand without showing them to the other players.

To start, place the double nine domino tile in the starting space in the center of your table. If no one has the double nine in their hand, all players draw from the chicken yard until it is presented.

Alternatively, you can set the double nine tile aside at the start of the game before drawing hands.

In the following rounds, you will begin with the double 8 domino, followed by the double 7, double 6, and so on until you play using the double zero domino in the tenth round.

Whoever places the initial double 9 becomes the first player, and subsequent plays continue in a clockwise rotation using dominoes from each player’s hands.

All players try to play a nine stemming from the original domino; however, they must draw from the chicken yard if they do not have a nine. If a player still does not have a playable domino, they say, “pass,” and their turn ends.

Players continue taking turns playing dominoes until all sides of the hub are filled with nines. Then, players can continue playing off the dominoes matching the numbers each time.

For example, if a domino tile has an open end of 3 pips or dots, you must place a matching “3” domino-like sides touching. If a player does not have a playable domino, they must draw from the chicken yard and play it right away if possible. If not, the player will have to pass.

You can play a “double,” which means that your domino has 2 like-sides, and you must play it perpendicular to the matching domino on the table.

Once a double is played, the following three moves must stem from the double. For instance, if the “double” is a tile with five pips on both sides, the following 3 players must put a five along the edge of the tile.

This layout will then look like a chicken foot– hence the name of the game!

The game continues, and players can build off of the chicken foot (once established) or make traditional plays on other dominoes in the game. Once the tiles run out from the chicken yard, players will only have the option to play or pass.

The game ends when a player runs out of dominoes or if no player can make a move.

How to Keep Score in Chicken Foot Dominoes

Players total their scores by adding up the number of pips from their remaining tiles. After all ten rounds, the player with the lowest cumulative score wins!

To make the game even more interesting, some players assign the double zero domino 25 or 50 points. Don’t be stuck with this tile in your hand at the end of the game!

Is Chicken Foot the same as Dominoes?

When playing Chicken Foot dominoes, three tiles are placed at the end of a double, making the pattern of tiles look like an actual chicken foot.

What Dominoes do you use for Chicken Foot?

You only need a standard set of Double Nine Dominoes to play Chicken Foot Dominoes.

Other Games Similar to Chicken Foot Dominoes (Our Guides)

If you enjoy playing Chicken Foot Dominoes, be sure to try these other games at your next game night: