In 1965, a Frenchman altered dominoes into a new game called Tri-Ominos which gave us a fresh new spin on a timeless classic.

The game is also the most sold board game in its native France.

The game gives a unique spin on dominoes and is perfect for veteran players looking for a fresh challenge or newcomers to board games alike.

Read on if you would like to know everything about Tri-Ominos rules including tips that will make you an expert in no time at all.

Tri-Ominos is a unique variation of dominoes, played in a similar way. The key difference is the shape of the tile.

It is a game that requires players to score points based on the decisions that they make when placing game tiles down on the board.

Shaped like an equilateral tile, this gives the player an extra dimension to think about which is absent in a standard game of dominoes.

Who Can Play It: 6+, due to the small tiles can potentially be a choking hazard.

Difficulty: Medium. There are slightly more aspects to be aware of in Tri-Omino rules compared to dominoes. It does get easier to understand through many games though.

Main Objective: Play all the tiles in your hand by matching your pieces with the tiles on the board.

Why we love it: Tri-Ominoes is a twist on a classic game. It requires a completely different strategy, however. If you’re a fan of dominoes but looking for something to spice up your board games then you should look no further then its triangular cousin.

What do I need to play Tri-Ominos?

Assuming you have at least one other person to play with, the most important thing that you will need to play is your very own set of Tri-Ominos.

This Tri-Ominos set from Goliath comes with exactly what you need to start playing straight away. 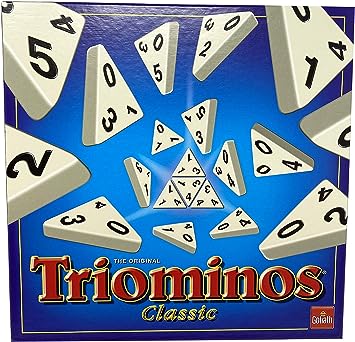 An easy-to-learn game that combines strategy with luck

If you’re looking to play while going on holiday, this set from Pressman is more compact and perfect for traveling. 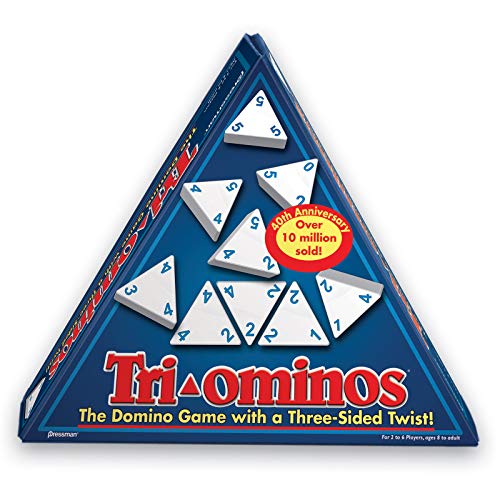 Tri-Ominos - Travel Edition with Lightweight Playing Tiles by Pressman
$15.16
Buy Now
We earn a commission if you click this link and make a purchase at no additional cost to you.

Also, make sure you have a pen and paper or a notes app on your phone so that you can keep score as you play.

Place all the tiles facedown and shuffle them around. Deal out 10 tiles to each participant.

Leave the remaining tiles facedown as this will form the stock or draw pile. When players need to pick up further tiles throughout the game then they will use the draw pile to do this.

Once all players have 10 tiles each and the rest of the tiles are facedown, the game can begin.

If more than one player has a triple Tri-Omino tile then the player with the higher number takes priority.

That player starts the game by placing down the triple Tri-Omino tile.

If no player has a triple tile, then players will calculate which one of their 10 tiles has the highest combined total.

The highest tile in this scenario starts by laying down to begin the game.

How to play Tri-Ominos

Determine the value of each tile by calculating the combined total of each number that is on the corner of the piece.

For example, if you play a tile that has a 5, 3, and 2 on each corner this tile is worth 10 points to the player’s score.

As previously mentioned, drawing a tile from the stock means that the offending player loses 2 points to their score.

Make sure that you have a designated player keeping score as you play.

Is there a way I can alter Tri-Ominos rules with regard to scoring?

Tri-Ominos is a great game as you can change the scoring to whatever works for you and your pals.

You can increase the number of points needed for victory and assign different scores to certain scenarios.

For example, the game has triangular pieces so a complete set will form a hexagon.

Ensure that you also adjust the penalty scores accordingly as well if you’re playing with a higher score limit.

Are there any strategies used in Tri-Ominos rules?

Expert players will try to use some strategies while playing Tri-Ominos.

A key strategy is trying is to block hexagons if you do decide to play with hexagons being worth a certain score.

Be very vigilant to the pieces that have already been previously played. Try to play your tiles so that the last tile needed to complete the hexagon is no longer available.

It is also important to ‘think ahead’ before playing tiles as it can be costly to keep having to draw tiles.

Have you given Tri-Ominos a try and are looking for another game to play with your chosen group of friends?

For a game that is very similar but easier to pick up, you can always give the classic game of dominoes a try before playing Tri-Ominos.

If strategic games are definitely your thing and you also like to play cards, why not give Conquian a go. It’s a rummy-like game that also requires a strategy to win.