Pokemon – who wouldn’t know this phenomenon? But do you know how to play the Pokemon card game? It doesn’t look easy but is well worth the effort. This Pokemon card game rules guide explains the gameplay in a nutshell.

Before we begin, I must confess that I used to be pretty skeptical about card trading games such as Pokemon. I always preferred classic games for their firm logic and traditional principles and considered these modern games just overly complicated and quirky.

Nevertheless, I changed my mind and started exploring this genre in detail once I was introduced to Bohnanza (see our Bohnanza rules if you don’t know this game).

That’s how I found Pokemon, a viral game, especially among kids and teenagers (check out more awesome group games for teenagers) – and I was immediately hooked because it surprised me with its complexity and smartness. Will you try it too?

This Pokemon card game rules guide will cover the following:

Learn how to play Pokemon from the following detailed instructions.

What is the Pokemon Card Game?

Before I get to the rules guide, I need to clarify that Pokemon is not just a single card game but a whole universe of movies, graphic novels, collectibles, TV shows, merch, and – several partially overlapping card games.

Today, I’ll focus on the basic and most popular version of Pokemon card games, the TCG (an abbreviation of ‘trading card game’). Traditionally, this game is intended for two players, and you can play it with ready-to-play decks or collect your cards over time.

Main Objective: Eliminate six of your opponent’s Pokemon cards before they eliminate yours.

Why We Love It: Pokemon is a surprisingly thoughtful card trading game with many diverse characters and numerous opportunities to improvise.

You probably know that Pokemon cards are typically sold in small assorted packages. It’s exciting to open them and see what they hide since you never really know which characters or action cards they contain.

Nevertheless, if you’re not into collecting and want to play the game straight away, I highly recommend buying a ready-to-play Pokemon Let’s Play TCG box, which includes everything you need for the gameplay right out of the box. 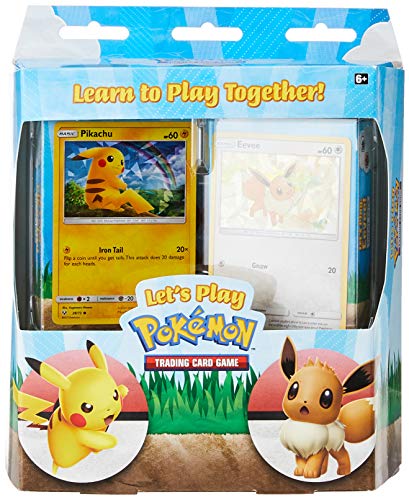 Pokemon Let's Play Pokémon TCG Box, Multi
$49.99
Buy Now
We earn a commission if you click this link and make a purchase at no additional cost to you.

When I first played Pokemon TCG, I was pretty much lost every other minute. I believe you’re most likely going to feel very similar.

Nevertheless, rest assured that this confusion will quickly pass as you enter the game and, most importantly, familiarize yourself with the game materials.

Each player first lays out their play-mat and shuffles their deck. The game set includes one yellow deck (‘Pikachu’) and one orange deck (‘Eevee’). Decide which player will play with which deck. Each play-mat has a designated place for the deck.

The players draw seven cards from their respective decks for their hands. Each player selects one basic Pokemon card and places it into their Active Pokemon place on the mat. You can recognize the suitable Pokemon by the ‘Basic’ label in the upper left corner.

Next, draw six more cards from your deck and place them in a down-facing pile on a Prize card space of your play-mat. Now it’s probably the right time to discuss all the different card types you will encounter in your Pokemon TCG deck.

There are three major types of cards in the play:

These are the cards representing various Pokemon characters. They all have a number in their upper right corner, indicating the amount of damage they can withstand before being eliminated.

As for the upper left corner, the aforementioned ‘Basic’ label indicates that the Pokemon is in its initial stage of evolution. Each Pokemon can evolve into ‘Stage 1’ and ‘Stage 2’.

Below the picture, you can find various actions your Pokemon can perform when combined with Energy. The exact type of Energy he needs is indicated by the colorful symbol next to the action. The black-and-white sign means you can use any Energy.

Now look down – there’s Weakness and Resistance. These parameters indicate how much damage your Pokemon will sustain when attacked. You can also see how much Energy your Pokemon would cost to retreat.

Energy cards can be attached to Pokemons to initiate specific actions. There are different types of Energy, so you’re goal is to match them correctly to your Pokemon’s actual needs.

These cards contain instructions to obey once they’re played.

How to Play Pokemon Card Game

Each turn can consist of seven different actions. You can take them all, or only some of them:

When you decide to attack your opponent during your turn, you must place a corresponding amount of ‘damage’ tokens (from the damage counter sheets) on your opponent’s Active Pokemon card.

You can only attack your opponent at the end of your turn. Once an active Pokemon sustains damage at or above its limit, he is eliminated from the game. This card and all the attached cards are discarded in a Discard area on the play-mat.

As a reward for eliminating your opponent’s Pokemon, you can draw one of your Prize cards. The opponent then replaces the eliminated Active Pokemon with another card from their Bench.

You can also win earlier if you manage to eliminate your opponent’s Active Pokemon while they have no other Pokemon cards on the Bench.

Not really. But the learning curve associated with this game remains relatively steep due to all the details and parameters you must pay attention to during each turn and action. It is still perfectly suitable for kids or beginners, though.

Sure! You’d be surprised how many adults worldwide love Pokemon TCG and even participate in various tournaments and competitions.

Is the Pokemon Trading Card Game worth it?

If you’re not sure whether it’s worth investing in dozens of individual card packs, you can buy a ready-to-play two-player game set containing all you need to play at a reasonable price.

Other Similar Games to Pokemon (Our Guides)

If you enjoy this game, you might want to check our guides to the following Pokemon card game alternatives: