That’s What She Said is an ideal choice for a game night with your friends (see more excellent game night ideas). It is simple, relatively fast, and mischievous – everything you might wish for when trying to kickstart a party.

What do you need to play this game? Actually, very little. Similar to If You Had To (check If You Had To game rules), this game asks you to propose hilarious answers to tricky questions and lets the judge decide who coped with the task the best.

This That’s What She Said game rules guide will cover the following:

Continue reading if you want to learn how to play the That’s What She Said game.

What is That’s What She Said?

That’s What She Said is a super-simple yet gratifying card game for four or more players. It is recommended for adults only, as some topics are somewhat explicit.

The game centers around creating absurd combinations of phrases that will certainly make you and your friends laugh. Therefore, even though you still compete and try to win the game, the primary purpose of playing it is to have fun and show off your sense of humor.

Similar to: If You Had To, Joking Hazard, For the Girls

Main Objective: Create the funniest combinations of phrase/setup cards and win over your friends.

Why We Love It: This is a party game at its best: Simple, witty, fast-paced, and hilariously amusing. If you need to break the ice, That’s What She Said is a great choice.

What You’ll Need to Play That’s What She Said

If you want to play this game, you’ll need an official That’s What She Said game set. It includes a set of cards that consist of:

Each type of card has its purpose in the game, which I’ll explain shortly. 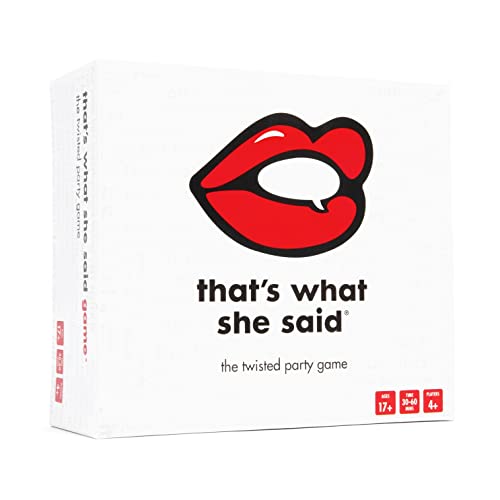 That's What She Said Game - The Hilariously Twisted Party Game Adults Only
$24.99
Buy Now
We earn a commission if you click this link and make a purchase at no additional cost to you.

That’s What She Said Expansion Packs

The same joke is not so funny when you hear it twice, right? Once you’re familiar with the basic card set and feel like you’ve already heard all the phrases before, you can prolong and upgrade fun with That’s What She Said Expansion Packs.

Note that you MUST possess the original game before buying any of the expansion packs – they do not work as standalone games.

That’s What She Said Game Rules and Instructions

That’s What She Said is a straightforward game that you’ll be able to pick up in just a couple of minutes. First of all, you need to understand the difference between the two types of cards this game involves:

Now choose the judge – according to the official rules, it should be the kinkiest person at the party. The judge opens the game by drawing one red setup card and reading the text aloud to all the players.

How to Play That’s What She Said Game

The setup card, which was just read aloud, creates a situation where the players must respond most funnily or smartly.

Example: The setup card says: “Everyone at the wedding gasped when the best man said to the bride: _______ The player can choose, for example, a phrase card saying: “Are you envious because mine is bigger than yours?”

That’s What She Said Game Scoring

The game continues until one of the players collects five red setup cards, meaning they won five game rounds. This player becomes a winner.

How to Play That’s What She Said – Video Tutorial

Is That’s What She Said appropriate for a family?

Unless all the present family members are at least 17 years old and none of them is particularly conservative, this game can be enjoyed by relatives without any concerns.

Can you add cards from That’s What She Said to Cards Against Humanity?

Some of the phrase cards in this game can fit similar games like Cards Against Humanity, but the majority probably won’t. If you want to update your gameplay, try adding an expansion pack with dozens of new cards instead.

Can you play That’s What She Said at a party with 15 people?

Yes, the more players, the more fun. But remember that the gameplay will also be shorter with more people involved because of the limited amount of cards.

Other Similar Games to That’s What She Said (Our Guides)

If you enjoy this game, check out our guides to these That’s What She Said alternatives too:

Read all the articles (34) written by Lucia Fajnerova