If card games that feature adult themes, tactical battles and holding your nerve are your thing, then check out the Coup card game rules as this game is for you!

Coup can be a challenging game to grasp, however once all players understand what to do, you’ll find that games can change in seconds depending on the actions and decisions made throughout.

So if this sounds like a game you would love to know more about, read on to learn how to play the Coup card game.

What Is the Coup Card Game?

The coup card game is set in a dystopian future where multinational CEOs have replaced the government, and everyone except the privileged few are living in poverty.

Coup gets played very similarly to another card game called Resistance (see Resistance’s rules), except Coup instead puts players in the role of a government official attempting to grasp absolute power.

Players need to exile other players by undermining their own agendas and causes until there is only 1 player left to grasp ultimate power.

Main Objective: Remove every other player’s influence and be the last player standing to win.

Why We Love It: A game of cunning wits and betrayal, Coup allows players to play smartly to rise to the top of government. A game that is different on each and every playing, any outcome is possible at any time as players rely on both skill and luck to navigate this game.

Get yourself the official Coup card game set to begin; naturally, this is important to play. 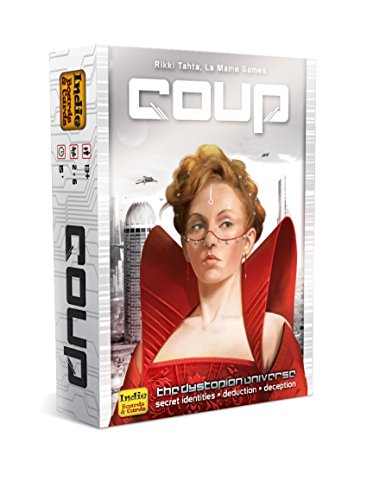 Coup (The Dystopian Universe)
$14.99 $11.99
Buy Now
We earn a commission if you click this link and make a purchase at no additional cost to you.

The set should include the following:

If you and your friends have mastered the base game, then consider getting the Coup expansion pack called Coup: Reformation, which adds extra cards and rules to the game. 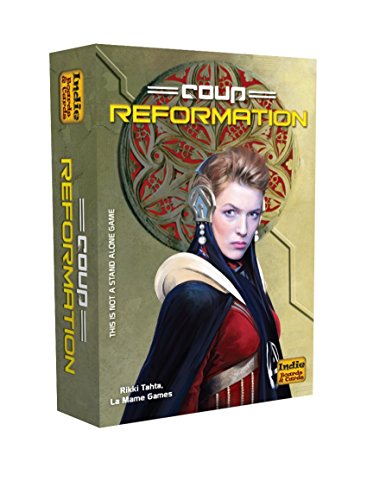 Coup Reformation (An Expansion)
$13.99 $9.59
Buy Now
We earn a commission if you click this link and make a purchase at no additional cost to you.

Or, for a more challenging spin on the base game played with different Coup card game rules, check out the Coup – Rebellion version. With 25 character cards rather than the standard 5. 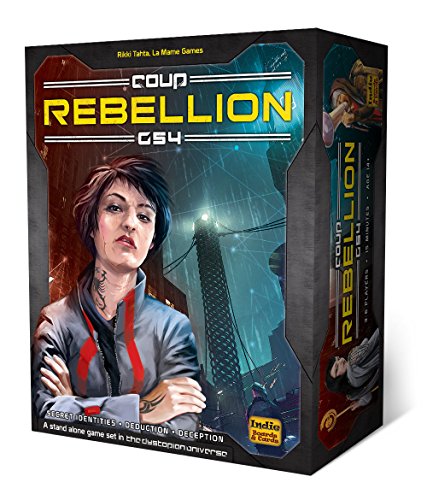 Indie Boards and Cards Coup Rebellion G54 Card Game
$34.16
Buy Now
We earn a commission if you click this link and make a purchase at no additional cost to you.

How To Set Up Coup

Gather the character cards together and shuffle them. Hand out 2 of these cards per player. Players can look at these 2 cards but must keep them faced down at all times.

All remaining cards get placed in the middle of the table face down, this is the Court Deck.

All players start with 2 coins each, and players must also keep their money visible to everyone else throughout the game.

Make sure all players know about the various actions and characters before the game begins, and hand out a summary card for each player to refer back to throughout the game.

The Coup game rules can be slightly complicated for newcomers and younger players to understand, but once everyone plays a few rounds, the rules do get easier.

The rules are also unlike any other traditional card game so be patient when teaching new players as well.

Choose who starts the game with any metric that suits everyone playing, a popular way is by picking the youngest player as an example.

Before you start, it’s important to recognize what Influence is as this is one of the key aspects of the game.

The character cards that you deal at the beginning represent the characters that the player influences and their abilities.

Once a player loses influence, they need to reveal 1 of their face-down character cards to everyone else playing, and they no longer influence that character.

Once players lose influence over both characters, that player is out of the game.

How to Play Coup

The player beginning the game chooses 1 action to do on their turn. They cannot pass, so players must always perform an action on every turn.

Once the player chooses their action, any other player may choose to either challenge or counteract. If there are none, then the action succeeds, and the game continues.

If there is a challenge, it must get resolved first before the game continues. Once the challenge gets resolved, the action can either succeed or fail based on the challenge.

The Actions that players choose depend on the amount they have in their treasury. Therefore, players can only enact actions if they can afford it, once the actions finish, they add the correct coins to their treasury.

The General Actions are always available for players to choose and are as follows:

The Character Actions are dependent on what characters players have influence over, and they allow the players to do the following:

The last part of a player’s turn is for other players to potentially perform a counteraction to whatever that player does in their turn.

These get done in the same way as Character Actions and include:

As Character Cards aren’t revealed to other players, someone does not need to possess the correct card to action or counteraction.

Any action or counteraction can get challenged by any player as soon as their intention gets announced.

Players get the option to challenge every action and counteraction, but once the turn expires the opportunity to challenge expires as well.

Players announce a challenge when they believe that another player doesn’t have the card that they are claiming to have when playing an action or counter action.

When challenged if a player gets revealed that they have lied about the cards they have then they immediately lose an influence card. The action or counter action also fails.

However, if a player wins a challenge by showing the group the correct card the action succeeds. They then put the card back into the Court Deck, shuffle and pick another one.

Coup works out who wins the game in a ‘last man standing’ format, and the winner is the player who is the last to still have 1 or both character cards left.

Otherwise, work out scoring based on the number of wins that each person has at the end of game night.

And as Coup is all about declaring the winner as the head of a dystopian futures government, award whoever wins the most games as head of your friend or family group.

Does the Coup Card Game rules allow a player to lose both of their Character Cards in 1 turn?

This is absolutely possible, and the most common way of this happening is when a player unsuccessfully defends against an assassination by losing a challenge.

The player loses 1 card for losing a challenge and 1 because the assassination succeeds. This makes blocking an assassination attempt without the card the ultimate risk vs reward strategy.

Are there any Coup Card Game rules that allow players to lend coins or swap cards?

Doing either of these things is not allowed, Participants play Coup in a player vs player mode so everyone is against everyone else.

There are no uneasy alliances or second place, it truly is a game where you are on your own to make the decisions.

We’re sure you’ll agree that once you play Coup you’ll see it’s played like no other card game on the market, but it’s replayability and tactical nature makes you want to come back for more.

Coup is also an example of 1 of may independent games worth checking out, if you’re after more though be sure to have a look at the Saboteur rules, Werewolf game rules, Skull King rules and The Mind Card Game rules.

Coup has some fairly heavy themes involved too. If you’re looking for a game a bit more lighthearted then we recommend taking a look at the Sushi-Go party rules or the Outburst game rules for games that are more light-hearted.