Spit is a popular card game for two players. Adults and kids love its simple rules, high competitiveness, and fast tempo. Not sure how to play it? These Spit card game rules will guide you through the gameplay in a few easy steps.

Card games for two players are usually not as intricate and complex as card games for three, four, or ten participants. Still, thanks to their straightforwardness, sharp logic, and rapid pace, they have a special place in my heart.

Spit is one of my favorite choices when I sit down to a card game with a single opponent. Like in War (see my War card game rules), you share all the cards right at the beginning in Spit. Except your goal is not to collect them, but you aim to get rid of them instead.

In some regards, Spit is also similar to the relaxing single-player Solitaire (check out our Solitaire rules). But don’t let this fool you – Spit is a highly competitive game that always ends with one winner – and one loser.

This Spit rules guide will cover the following:

Continue reading for detailed instructions on how to play Spit.

Spit is the game many of us learned to play as kids. Little is known about its history, but I’ve heard it originates in France and is most likely derived from older card matching and shedding games.

Main Objective: Be the first player to get rid of all your cards.

Why We Love It: Spit is one of the most accessible and gratifying shedding-type card games you can play in a pair.

Spit is one of those perfectly undemanding card games you can play with a single deck of 52 standard playing cards. 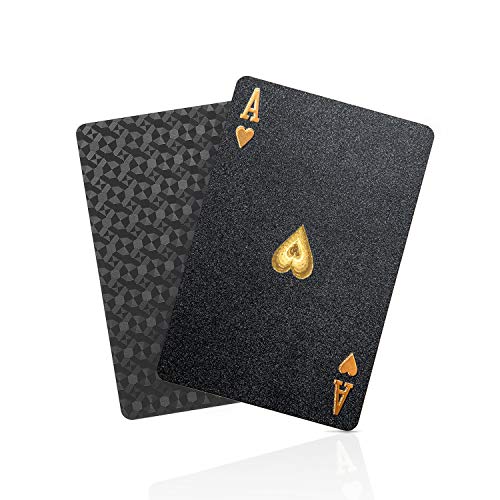 BIERDORF Diamond Waterproof Black Playing Cards, Poker Cards, HD, Deck of Cards (Black)
$17.98 $6.99
Buy Now
We earn a commission if you click this link and make a purchase at no additional cost to you.

Spit is a simple game that does not require any particular strategies or skills. If you’re not new to card games, it will probably feel very familiar since it combines the essential principles of numerous other classic card games.

But even if this is your first card game to try, I am sure you will be able to catch on to Spit very fast.

First, you decide which one of you will be the dealer. The dealer’s job is to shuffle the cards and deal them all among the two of you, one card at a time.

Next, each of you deals a portion of your cards into your respective five down-facing stockpiles with the following number of cards:

Now you can turn over the top card in each of the piles. Next, place the rest of your cards on the table next to your stockpiles. This pile contains your “spit cards” (I will explain it shortly), and you are not allowed to look at them yet.

Is everything ready? You both can say “Spit!” to officially start the game.

How to Play Spit

First, both of you simultaneously flip the top cards on your spit piles and place them side by side at the center of the table between your starting piles. These are your Spit Piles.

Just like you’ve begun, you will continue playing simultaneously: There are no turns in Spit, so you both perform your moves at the same time. This is how the game proceeds:

Continue playing, following the above principles. Whenever you can make a move, you are obliged to do it (no skipping or ignoring possible moves). However, you most likely will eventually get stuck. When both players are stuck without moves, they call “Spit!” again.

Now you can restart the game by simultaneously flipping over another of your spit cards and placing it over your existing spit pile in the center. The game continues.

End of the Round

In Spit, you aim to discard all your cards by placing them on one of the central spit piles.

When one of the players succeeds in playing all the cards from their stockpiles, they slap one of the spit piles with their hand. This is a signal that the round has ended.

Each player now shuffles their cards and creates new stockpiles, just like at the beginning of the game.

If you have less than 15 cards (minimum for stockpiles), deal as many as possible in the standard order. In this case, you will not have a remaining card for your spit pile so that you will play with a single spit pile created by your opponent.

The player who gets rid of their stockpiles first slaps the only spit pile, BUT this time, his opponent is the one to collect it and add it to their spit cards.

As you can see, the gameplay rapidly speeds up with each new round, and it’s soon pretty obvious which player had higher chances of winning. Nevertheless, I’ve seen many dramatic turning points in Spit, so don’t lose your hope and determination.

The game of Spit does not have any points or values to count. The only measurable success is getting rid of ALL your cards. The first player who succeeds in this wins the game.

Do you use Jokers as wild cards in Spit?

No. Unlike in some similar games (including Speed), you do not use Jokers in Spit. Sort them out of the deck before you start playing.

Can you take back or change your move in Spit?

No. Once you completely move a card in Spit, you cannot undo the action anymore. Also, you must make a move whenever you can.

Is Spit and Speed the same game?

No. Spit and Speed are similar shedding-type card games, but they are not identical. In Speed, for example, you don’t deal the whole deck between the players. Also, the winner is whoever wins three independent rounds.

Other Similar Games to Spit (Our Guides)

Do you like this game? Check out our guides to the following Spit alternatives: