Single-player card games can be played anywhere and at any time. FreeCell is one of the most popular choices in this category. My FreeCell rules guide will show you why.

As an avid player, I often find myself in the mood for a game session with no one around to join me. Though I know many single-player card games, I always search for something new.

Although FreeCell is a classic, I’ve discovered this rewarding Solitaire variation recently (see our Solitaire rules too). Nonetheless, it became one of my favorites instantly.

What makes this game special? It’s dynamic, pretty easy to learn, and all you need to play it is a single deck of cards.

While, statistically, every fifth Solitaire game cannot be won regardless of how hard you try, with FreeCell, the odds are at your side since 99% of all the FreeCell games are winnable.

This FreeCell rules guide will cover the following:

Read on for detailed instructions on how to play FreeCell.

FreeCell belongs to the same category of games as Solitaire or Diplomat, but it has some uniqueness.

In this game, for example, there is no draw pile to help you out when you get stuck. Instead, you deal all the cards face-up right at the beginning.

But don’t worry; winning this game is not as hard as it may sound. Even younger and inexperienced players can quickly master FreeCell with some practice.

Similar to: Eight Off, Solitaire, Diplomat

Main Objective: Stack all the cards on the foundation piles in consecutive order and in matching suits.

Why We Love It: If you like to win, FreeCell is a perfect game for you since 99% of FreeCell games are statistically winnable!

What You’ll Need to Play FreeCell

You can play FreeCell with a standard deck of 52 playing cards. You won’t need anything else except a spacious table or some other flat surface. 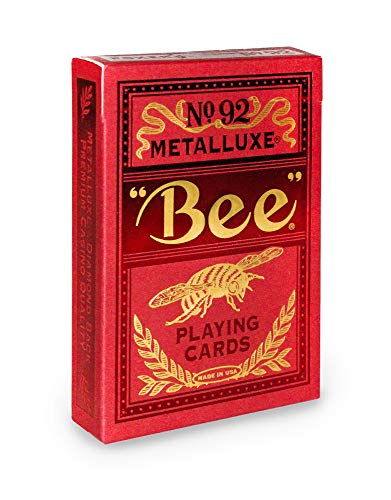 Bee MetalLuxe™ Playing Cards – Red Foil Diamond Back, Standard Index
$12.99 $11.99
Buy Now
We earn a commission if you click this link and make a purchase at no additional cost to you.

If you’re not entirely new to the Patience/Solitaire category of games, you probably already know that the main objective of FreeCell is to build stacks of cards organized in matching suits and consecutive orders.

However, although the games from this category have many similarities, they also have some differences, so before you jump at it, take a minute to read the following instructions.

Shuffle your deck and deal eight face-up cards in a row to set the game up.

Now deal all the remaining cards over the first row, with each new row protruding enough for the cards below to be recognizable.

The first four columns will get one more card each compared to the rest.

How to Play FreeCell

You aim to build four piles of consecutive ranking cards in this game – one per suit.

Typically, players stack these piles above the rows of upward-facing cards on the left. You can, however, choose to place the four foundations elsewhere.

These stacks always start with Aces, and you must build them all the way up to Kings.

Besides the foundations, you must also reserve some space for four free cells – temporary storage places for cards that gave this game its name.

You can move the cards around in three different ways:

When you move all the cards away from one or more columns, you can place any other cards in the free places.

This is particularly helpful when your free cells are already occupied, and you’re stuck.

There is no scoring in the classic version of the FreeCell game.

Once you’ve successfully moved all your cards onto the foundations, you won the game. If you get stuck and cannot move anymore, you have lost.

How to Play FreeCell – Video Tutorial

Are there different versions of FreeCell?

Yes, you can come across several different versions of this game. In most cases, the versions of FreeCell differ in the number of used decks, free cells, or columns.

Is FreeCell good for your brain?

Scientists suggest that playing Solitaire and similar games (including FreeCell) benefits your cognitive skills. According to some studies, these games can also be used to distinguish between a healthy person and a person with memory loss issues.

How hard is FreeCell?

FreeCell has simple rules, and the odds of winning are exceptionally high. Nevertheless, the game is still fun and intricate, requiring logical thinking and sound perception.

Other Similar Games to FreeCell (Our Guides)

If you like FreeCell, maybe you should also try some other games based on or related to Patience. Check out our guides for the following FreeCell alternatives:

Read all the articles (59) written by Lucia Fajnerova