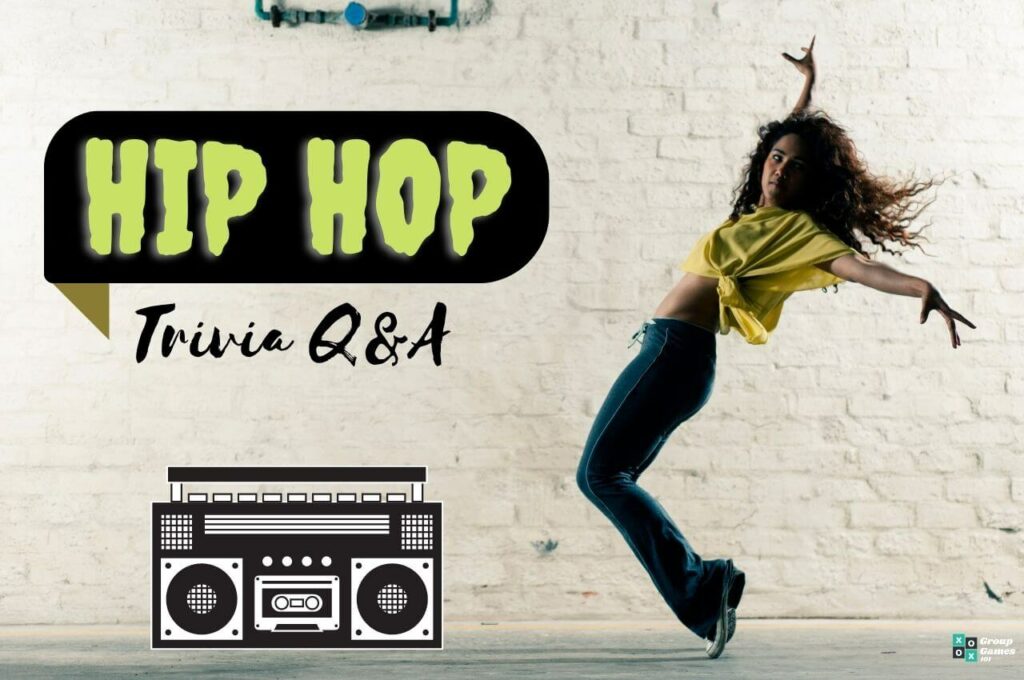 Looking for some hip hop trivia questions to really test your knowledge of this genre, its biggest stars, and greatest hits?

Hip hop is a music genre with beats and rhymes like no other. It can be used to tell a story or just for entertainment and is one of the most popular types of music in the world.

Originally, hip hop was used to spread awareness about poverty and often discrimination used against African Americans, but it soon bloomed out from basements, studio sessions, and rap battles into mainstream media.

Hip hop has been sung and adapted by different people from different places, races, and creeds.

Let’s see how much you know about it through the following hip hop trivia questions!

The first batch of hip hop trivia questions are in no particular order and with no specific category; the following questions are all completely random.

If you’re playing with friends, thanks to the ‘show the answer’ button, you can be the designated host and have no advantage.

If you’re rapping solo, it can be tempting to cheat, but there may not be any need, and you could well know more about this musical genre than you thought!

1: What is widely considered to be the first-ever hip-hop track?
Rappers Delight, The Sugar Hill Gang.
2: Does Eminem have more or less number one albums than Jay-Z?
Less; Eminem has 10 number one albums; Jay-Z has 13.
3: Who is the wealthiest hip hop artist?
Kanye West, whose net worth is rumored to be $6.6 billion!
4: What hip hop artist or band has the most number 1 singles?
Drake with 21
5: What Californian-based hip-hop group released 'Tequila Sunrise'?
Cypress Hill.
6: What was the name of NWA's first album?
Straight Out Of Compton.
7: What is O'Shea Jackson better known as?
Ice Cube.
8: Which label was founded in 1993 by Puff Daddy and has been home to many artists, including The Notorious B.I.G, Mase, 112, and Craig Mack?
Bad Boy Records.
9: In what year was The Parental Advisory label introduced by the Recording Industry Association of America?
1985.
10: In what movie did 50 Cent play Marcus' Young Caesar' Greer?
Get Rich or Die Tryin'.
11: What was the name of Eminem's hip hop group?
D12.

Authentic hip hop as a culture and a genre formed in New York predominantly during the 1970s.

Beatmatching, drum machines, and scratching developed with rhythmic chanting, speaking, singing, and shouting, as the 80s youth found an outlay for their ancestors’ suppression and their anger of the day.

It wasn’t until the 1980s that hip hop hit mainstream media, but when it did, it spread like wildfire, and nothing on the music scene was ever the same again.

The following hip hop trivia questions are about the roots of the music and its very early days.

1: What is the time between the mid-1980s and mid-1990s known as regarding hip hop?
The Golden Age.
2: What type of subgenre dominated West Coast hip hop?
G-Funk.
3: An influx of immigrants from which country to NYC is cited as the most significant influence on hip hop?
Jamaica.
4: What is the name of one of the earliest and most influential hip hop groups that was founded by Joseph Simmons, Darryl McDaniels, and Jason Mizell in Queens, NYC?
Run-D.M.C
5: What are pioneers DJ Kool Herc, Afrika Bambaataa, and Grandmaster Flash better known as?
The Holy Trinity of Hip Hop.
6: Despite its scarce radio play beyond the LA area, which rap/hardcore hip hop album was the first in its genre to receive platinum certification?
Straight Outta Compton.
7: By what year did hip hop become a top-selling music genre?
1999.

What makes a great hip hop group? Is it charisma, chemistry, chart-topping hits? While all essential ingredients, my hip hop trivia questions about the greatest groups are about those that have a little more than others.

Cypress Hill and the Beastie Boys showed us how music can bridge cultural gaps, NWA spoke about things no other group ever had, and they made a difference with their activism.

OutKast resonated with our humanity, and RUN-D.M.C brought breakdancing to the world’s stage.

1: In 1986, which female hip hop group had police waiting backstage to arrest them due to misheard song lyrics on their biggest-selling track?
Salt-N-Pepa (Push It).
2: Which hip hop group comprised members Buckshot, DJ Evil Dee, 5ft Accelerator?
Black Moon.
3: Which Houston-born group earned several certified albums and hit singles, including a no.1 called 'Mind Playing Tricks on Me'?
Ghetto Boys (later spelled Geto Boys).
4: 'Blunted on Reality' was the debut album of which 3-piece hip hop group?
Fugees.
5: What is the name of the all-white hip hop group that toured with Madonna and had the first rap record to top the Billboard 200 chart?
Beastie Boys.
6: In 1993, an album release by which group received widespread critical acclaim and has been consistently rated as one of the best hip hop albums of all time?
Wu-Tang Clan.
7: Which group received a warning letter from the FBI and subsequently called themself 'the world's most dangerous group'?
NWA

Today, hip hop artists are some of the richest and most successful in the world; and this isn’t without reason.

However, as the following hip hop trivia questions will reveal, some have managed to become incredibly successful commercially with net worths that are a world away from their humble beginnings.

I have looked at certified record sales of the following artists to ensure that it isn’t just me who considers them to be the greatest.

Let’s see how many artists you know!

1: Raised in a trailer park in Detroit, this artist went on to be the best-selling rapper and hip hop artist of all time.
Eminem.
2: Which artist's best-selling single was titled 'God's Plan' and is widely known as the most commercially successful non-American rapper?
Drake.
3: Which billionaire songwriter, producer, and hip hop star had a best-selling album called Late Registration in 2005?
Kanye West.
4: How is Onika Maraj-Petty better known?
Nicki Minaj.
5: Who dropped out of their New Orleans high school to focus on their Hip Hop career, only to become the 5th most commercially successful rapper of all time worldwide?
Lil Wayne.
6: How is billionaire businessman, producer, and artist Shawn Carter better known?
Jay-Z.

That’s a rap! How well did you do with my hip hop trivia questions? If you’re up for another challenge, here’s a selection of other trivia games you may enjoy:

Thank you for chillin with us today; peace out!