Initially created almost 50 years ago, Pass the Pigs is essentially a dice game that uses pigs instead of dice!

Roll the pigs from the “pigsty” to see which way they land on the table. Based on the way the pigs land after each roll, players earn points. The first player to reach 100 points is the winner of this game.

Pass the Pigs is a compact all-in-one game that you can play at the pub or on your next camping trip. Easy to learn and quick to play, try playing Pass the Pigs at your next family game night.

This Pass the Pigs rules guide, will cover the following:

Read on to learn how to play Pass the Pigs.

What is Pass The Pigs?

Pass the Pigs is a dice game that uses miniature toy pigs in place of dice. Players roll the pigs to see which way they will land on the table to earn points.

Why We Love It: Pass the Pigs comes in a portable container making it an easy grab-and-go game to bring on vacation or to play at the pub with friends after work.

A Brief History of Pass The Pigs

Pass the Pigs is a well-known game familiar to people around the world. Pig Mania, initially named in 1977 by David Moffatt, grows in popularity as the decades roll by.

In 1984 the European edition of the game, Schweinerei was released by Milton Bradley.

Hasbro Games took over the production of Milton Bradley products in the late 1980s, and Pass The Pigs is sold today by Winning Moves Games.

What You’ll Need to Play Pass The Pigs

Everything you need to play comes included in this boxed set: 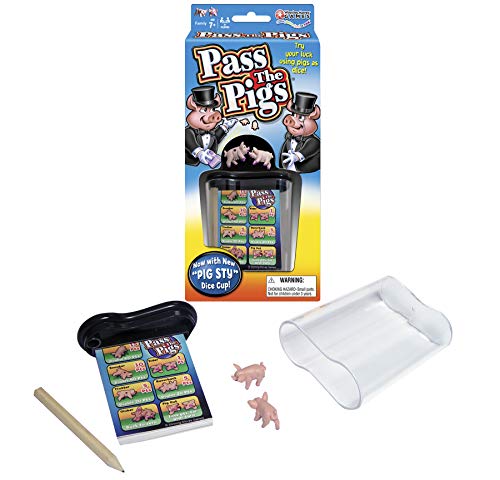 Winning Moves Games Pass The Pigs
$14.93
Buy Now
We earn a commission if you click this link and make a purchase at no additional cost to you.

All you need to play Pass the Pigs is a table or flat surface to roll the pigs.

One player will use the scorepad to keep track of everyone’s scores.

Use the Pigsty cup to roll the two pig figurines onto the table. Players take turns rolling the pigs in this unique game.

To start, select a player to go first by rolling both pigs at the same time. You can proceed as many times as you would like, but points must be recorded when you decide to stop, and the turn moves to the next player in a clockwise rotation.

If you roll a Pig Out or an Oinker, you must stop, and the next player will begin their turn by rolling the pigs.

Below are the descriptions for the following pig positions:

The game continues as each player rolls the pigs and collects points. Players may be eliminated throughout the game if they roll a Piggy Back.

Another variation to add for more playing fun is called Hog Call. During this gameplay, opponents can shout out a prediction for the position of the pigs before the pigs land on the table.

If called correctly, the player earns double the specified points, which are also deducted from the roller.

How to Keep Score in Pass The Pigs

After each round, the scorekeeper will write down points using the scorepad. The first player who earns 100 points is declared the winner.

Below are the point values for the following pig positions:

Pig Out: Lose all points for the turn

Oinker: Lose all points for the game

Piggy Back: Game over, player loses

When pigs land in two different positions, this is considered a combo. Players add the point values for each of the pig’s positions individually.

Pig 1 lands in a Snouter position, and Pig 2 lands in a Razorback position, the player earns 15 points for the turn. (Snouter = 10 points, Razorback = 5 points.)

How to Play Pass The Pigs – Video Tutorial

What Ages Can Play Pass The Pigs Game?

Pass the Pigs is recommended for ages 7 and up; however, a younger child could undoubtedly play, although adding point values may need help.

Can You Score Higher Than 100 Points In Pass The Pigs?

Generally, the player to reach 100 points first is the winner. You can add a fun twist that allows players to continue to roll for more points beyond 100. In this pig-headed addition, players run the risk of losing everything in this game of chance!

Other Games Similar to Pass The Pigs (Our Guides)

If you enjoy playing Pass The Pigs, be sure to try these other games at your next game night:

Read all the articles (33) written by Andrea Huguley