A dice game that can beat solitary blues and add spice to a family game night, Yahtzee has been ruling hearts, parties, and online gaming platforms for over a decade now.

Owned and produced by the gaming conglomerate, Milton Bradley Company which is now acquired by Hasbro Gaming, Yahtzee has become a household gaming essential. Game critics often find similarities between Yahtzee game rules and those of Yatzy, the Scandinavian game. 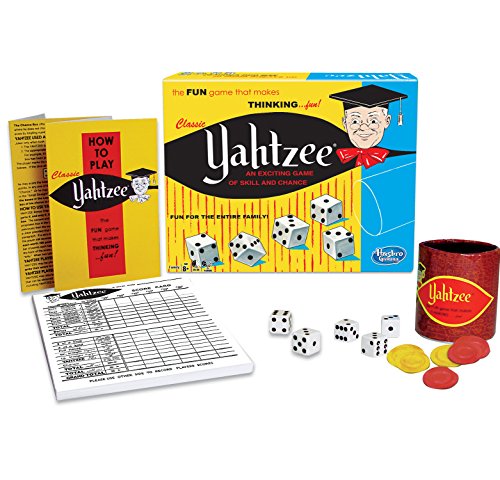 Yahtzee
$12.99$10.99
Buy Now
We earn a commission if you click this link and make a purchase at no additional cost to you.

Yahtzee is a dice game (similar to Farkle rules) that is played in 13 rounds, each with an objective of meeting the requirements of one of the 13 game categories. The highest-scoring category is the ‘five of a kind’ Yahtzee.

Number Of Players: 1 or more

Ages: Fun for all ages

Main Objective: To roll out combinations that fit into most category descriptions and obtain the highest sum total.

Why We Love It: It can never get boring. Each time your roll, you have a different objective in mind which keeps the game intriguing from start to the end. It’s interesting, unpredictable, and super flexible so that you’re engaged even if you’re alone!

The Journey Of The Game Of Yahtzee

Most historians and Yahtzee enthusiasts believe that the game is a refurbished adaptation of popular games like Poker Dice, Generala, Yacht, and Yap. The game is said to have been marketed long back during the 1950s, decades before Milton Bradley created an official game kit for the same.

Over the years, Yahtzee has taken up different forms and adaptations, with Yahtzee-inspired video games essentially gaining popularity. One name that is often associated with this game is of the popular video game journalist and Yahtzee critic (yes, that’s a thing), Yahtzee Croshaw, less popularly known as Benjamin Croshaw.

How To Set Up A Game Of Yahtzee?

There’s no elaborate set up required for a game of Yahtzee. As long as you have all the equipment that creates a Yahtzee kit, you’re good to go. Let’s have a look at what a typical Yahtzee kit looks like:

Yahtzee
$12.99$10.99
Buy Now
We earn a commission if you click this link and make a purchase at no additional cost to you.

Yahtzee game rules are completely centered around the list of 13 categories that the game is divided into. The one basic rule of Yahtzee is that when a player rolls the five dice, the face value of the resulting combination should match one of the 13 categories of the game.

For each category, the greater your combination matches with the category description, the more you score.

How to Play Yahtzee – Rounds

For 13 categories, every player gets 13 rounds. In one round, a player gets 3 chances to achieve the perfect combination to tick off a category.

For example, a player rolls 1-2-2-3-4 in the first chance. This opens the chances to score well in the category of Twos. So the player sets aside dice with 2 on the face and rolls the remaining three. In the second chance, the player gets 1-1-3.

If the player gets a combination that matches no category after all the three chances are exhausted (and the Chance category is already used), the player’s score for the round is 0.

The 13 categories are divided into two sections — upper and lower — with 6 and 7 categories distributed respectively.

The scoring in these categories is characterized by the sum of those dice values in a combination that have the same number.

The six categories are:

The trick to scoring well in an upper section category is to get the maximum number of dice with the face value corresponding to the category name/number.

So the player sets any die aside and rolls two dice in chance three. If the player manages to get one more 2 in this chance, the final score for the round and category becomes 6.

In the lower section, the scores of three categories are determined by taking the sum of the value of all dice:

Whereas the remaining four categories have designated scores: 25, 30, 40, 50, respectively.

The trick to scoring well in the lower section is to identify and set aside the dice with numbers that can form patterns across the three chances.

Continuing the above example, after the second chance, the player had two 2s set aside, and could set aside the two 1s, and play the third chance hoping to score another 2/1 to score on a Full House and add 25 points to the total score.

To earn bonuses and boost your score, another trick is to score as many Yahtzee’s as possible!

If the sum of all category scores in the upper section totals to over 63 points, a section bonus of 35 points is added to the final score. The final score is the sum of scores of both sections and bonuses. In a multi-player game, the player with the highest score wins the game.

How Many Dice In Yahtzee?

To play Yahtzee, you will need 5 dice!

Can One Category In Yahtzee Also Correspond To Other Categories?

Yes. For instance, a full house combination can give you a good score for corresponding to each of the upper section categories as well as in the Three of a kind or Chance categories.

What Is A Yahtzee Bonus?

A Yahtzee bonus is obtained for every Yahtzee achieved after you have already used up that category. One must not fill any other category (like Three Of A Kind) for subsequent Yahtzee combinations as the bonus is worth 100 points!

What Are The Highest and Lowest Possible Scores In Yahtzee?

The highest possible score can be obtained by scoring 13 Yahtzees for all 13 categories to bring the total to 1575. The lowest possible score is more than 5, thanks to the Chance category that totals the values of any random combination.

Yes, there are alternative games. For game nights that turn into mornings and inspire more game nights, you are always on the lookout for more interesting games, and we always have options to offer.

You might want to try out a dice game based on simple arithmetics such as Qwixx. If you’re a fan of chance dice games like this one, you must try Shut The Box. Otherwise why not give 3 dice game a go as well.

If you feel you’re done playing with dice, check out these card game options as well. We’ve got you covered.