Charades is one of the most popular party games in the world. Depending on your creativity, improvisation skills, and willingness to act goofy, it can be hilariously funny. This step-by-step Charades rules guide explains how to play it.

Imagine that you’re trying to explain something specific – like a funny saying or the name of a movie – to someone who doesn’t speak your language.

You’ll use your hands, facial expressions, and probably your whole body to impersonate the word. But sometimes, even the most creative performance is not enough.

That’s Charades, in a nutshell, one of the funniest guessing games ever. If you’re planning a game night with your friends or relatives, you cannot go wrong with it (see more nice game night ideas).

This action-packed party game is great for both young and old, and no two games are ever the same. Similar to Hedbanz (check Hedbanz rules), the player’s task is to guess a particular word or phrase, but this time, you cannot use a single word to describe it.

This Charades rules guide will cover the following:

Read on and learn how to play Charades with your family and friends.

Charades is one of the oldest still played party games in the world. People played it in parlors from at least the 18th century. Now it’s a common pastime at family gatherings, kids clubs, and schools.

Similar to: Pictionary, Hedbanz, It’s In the Bag

Why We Love It: Charades is hilarious as you can perfectly adapt it to your skills, interests, or even real-life experiences, making it highly personalized fun.

What You’ll Need to Play Charades

Charades is a classic party game you can play with or without a ready-made game set. If you decide on free play, all you need is paper, a pen, and lots of creativity to invent your charades (I will provide you with some inspiration shortly!).

Nevertheless, you can also make it easier with one of the commercial Charades game sets, providing you with all you need to play right out of the box.

Since the concept of charades is not licensed, the game sets are made by different producers and can differ greatly. My favorite is Family Charades by Outset, which comprises six categories that work as individual games. 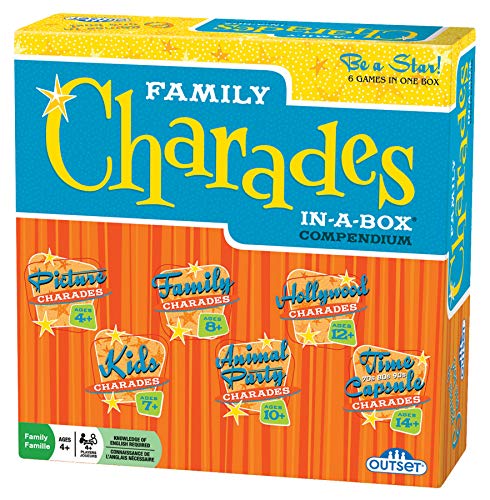 Playing Charades is very easy. There are a few rules to follow, and scoring is straightforward. However, some players might need time to learn how to play it well, letting go of their reservations and unleashing their creativity.

In this guide, I will explain the rules of the Family Charades game set mentioned above. Nevertheless, they can also be applied to free play or similar sets with some adjustments.

First, pick one of the six decks of cards. Each targets a different category of players:

Note: You can even play two charade games simultaneously. For example, if one of your teams includes younger players, they can use the Kids Charades deck, whereas the all-adult team will play with another deck.

When you’ve picked your game:

How to Play Charades

The team with the youngest player goes first. They pick one of their players to be the actor(every team member should try this role during the gameplay).

The actor draws one card from the draw pile. He is not allowed to show it to anyone else. Then it’s time to spin the spinner, one of the distinctive elements in the commercial version of Charades.

Spinner: How does it work?

Each card contains three charades. The spinner determines which one should be performed:

Next to each charade is a number indicating how long the actor is allowed to act (and his teammates to guess). It can be either 30, 60, or 90 seconds.

This period is measured with the included 30-second sand-timer(turn it around as many times as you need). If you perform “All Three,” the period is automatically set to 90 seconds total.

When an actor performs a charade, there are several actions to avoid:

Otherwise, you can use your whole body, face, and gestures to demonstrate the meaning of your charade. Your teammates will guess the charade within the given time.

Note: If you play with the same people frequently, you will develop your joint language of gestures for various words, making winning much easier. It is recommended to change the charades often to keep the game fun.

How to evaluate a charade

Your teammates must guess the charade fully and accurately – just like it stands on the card (e.g., correct tense, order of the words, etc.)

The rules are relaxed if you play the pictures charades(intended for preschoolers). You can accept any guess that understandably interprets the picture. You can also play without a timer or stick to one team to eliminate the pressure.

When the time runs out, place the used card at the bottom of the pile. Then the next team (clockwise) is on the turn.

The game continues for 12 rounds. Then you count the scores.

The team with the highest score wins the game.

Have you decided to play a free game of Charades without an official game set? Here’s an inspiration for some simple charade words you can start with:

Once you’re ready for a real challenge, you can try some of the following mind-boggling charade words for advanced players:

How to Play Charades – Video Tutorial

Yes. Although Charades is usually recommended for at least four players, enjoying the game even in a pair is not impossible. You will play as two competing individuals guessing the charades of each other.

Can you use clues for Charades?

Players can agree on whether they do or do not allow using clues during the game of Charades. Typically allowed clues include revealing a number of words, number of syllables, etc.

What are Charades’ goals when playing with children?

Other Similar Games to Charades (Our Guides)

Looking for some exciting Charades alternatives? Here are our guides to other similar party games you should try: