An international preschool classic, Pop the Pig is a game that doesn’t need a second mention. It’s unique, appealing and intriguing to the kids, and blends in the right amounts of fun and thrill.

Goliath Games has done an excellent job over the years as it has modified and marketed the game to primarily target the preschoolers. If you’ve an excited kid waiting at home looking to play the game, this guide will be helpful. 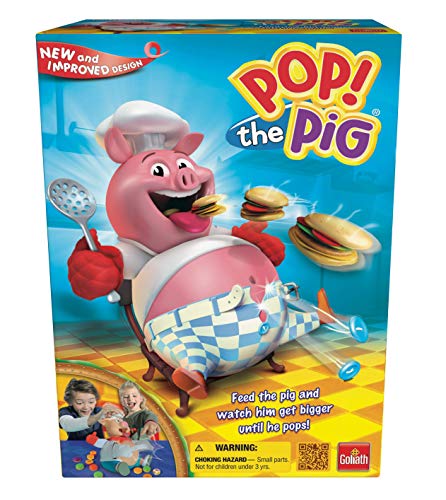 Pop The Pig Game
$29.58
Buy Now
We earn a commission if you click this link and make a purchase at no additional cost to you.

What Is Pop The Pig Game?

A classic fun game for preschool kids, Pop the Pig the game is a good way of keeping the kids busy. It’s about kids having fun while the pig gorges on delicious hamburgers. Meanwhile, they also learn the lesson that feeding/eating too much junk doesn’t have pretty outcomes!

Length of Play: Under 30 minutes

Main Objective: Each player has to make the pig chew the hamburger the number of times they get on the rolling dice. Feed the pig until it pops!

Why We Love It: Kids can’t get enough of the suspense of who will be the popper despite the simple nature of the game. It’s unusually satisfying to watch the pig’s belly grow larger, and fun to watch it pop.

Background To The Game

Pop the pig belongs to the international game giant Goliath Games. It was developed and introduced to the stores in Europe in the year 2006. It was quick to gain popularity among kids and have become a kids favorite game across the world. It is one of the popular games used to engage students in preschools.

Pop The Pig Instructions For Set Up

Contents Of The Game

Ever since its launch, Pop the Pig is still exclusively sold by its original creator Goliath. A typical game kit contains the following:

Pop The Pig Game
$29.58
Buy Now
We earn a commission if you click this link and make a purchase at no additional cost to you.

There are four simple steps to set up this game.

Pop the Pig Rules and Gameplay

Pop the pig is developed keeping in mind the minds of little children. This is why it’s not only fascinating and satisfying but also the rules are extremely easy to understand.

The youngest player goes first. The die is played and the sticker that appears on the face decides what the player will do next. There are three possible conditions possible after a die throw:

Feeding The Hamburgers To The Pig

When a hamburger color is assigned by the die or decided by the player, he or she flips one of them lying face down to see the number. The number on the hamburger indicates how many times the pig has to chew that burger (or the player has to make the pig chew).

For instance, if a player gets the red color on the die, that player will flip a red hamburger to see the number. Let’s say it is numbered 3, then the player will place the burger deep inside the pig’s mouth and with both hands, press the head of the pig downwards.

The hamburger will slide down into its tummy, but what’s important is the air that will be pumped in. The greater the number you get on your burger, the more you inflate the tummy of the pig, and the closer you reach to the end of the round.

Whether a player wins or loses when he or she pops the pig depends on local rules. While pop the pig instructions by the original creator of the game, Goliath Games, says the player to pop the pig loses, several American versions say otherwise.

If you want to play a longer game, you must go with the ‘pop the pig and lose’ rule. Because that keeps eliminating one player at a time, the game resets, and the last one standing wins. This rule also makes the game more suspenseful. Ironically kids get excited when their turn is skipped because that’s a chance to not lose the round.

For instance, if the pig is already inflated enough, every player will be at an edge and will hope to get lower-numbered hamburgers so that they aren’t the ones that end up popping the pig. In such a situation, if a player gets a skip, the player most likely jumped the hoop and one of the next two players is likely to lose the round.

If you are looking to make the game easier than it already is, you can go for the ‘pop the pig and win’ rule. In this case, the opposite of the above discussion happens. Players wish for greater-numbered hamburgers when the pig is inflated in a hope to pop the pig.

With each round, a point is given to the winning player. A set number of rounds is decided and the player with the maximum score towards the end wins the game.

By either of the above rules, if you decide to continue the game, you will need to bring down the fat pig back to the deflated condition before you can begin. It’s as easy as the set up so don’t worry, you won’t have to help the kids each time they repeat the game for hours. Here’s how you can teach the kids to reset it:

Does Pop the Pig game have different versions?

Yes. Goliath Games has developed a newer version of the game. Besides the different checkered pants on the new pig, the main difference is in the design which makes the resetting process slightly easier.

Can we play Pop the Pig with a regular dice?

It’s possible, but it may get complicated for young kids. You can easily assign numbers 2 through 5 to the different colors of hamburgers used in the game. The number 1 can be used as a skip and number 6 as ‘all colors’ or ‘any color’. While this is fairly easy to remember for us, preschool kids might easily get confused between colors and numbers.

Are the materials used to make Pop the Pig game durable and safe for kids?

Yes, pop the pig is designed particularly keeping kid’s safety and habits in mind. The materials used are safe silicone and PVC. Latex is also used in the checkered pants version.

Kids can be really fickle and it’s only natural if you are constantly in the lookout for fun games that can keep the kids engaged and perhaps help in some learning.

For casual fun among several kids, you should try out the Fruit Salad and Don’t Wake Daddy game. To foster some learning while playing, there are few games as good as Memory.

You can also check out our entire kids games collection for more inspiration.

The most popular puzzle on the World is undoubtedly the Rubik’s Cube. Learn how to solve it with the beginner method.