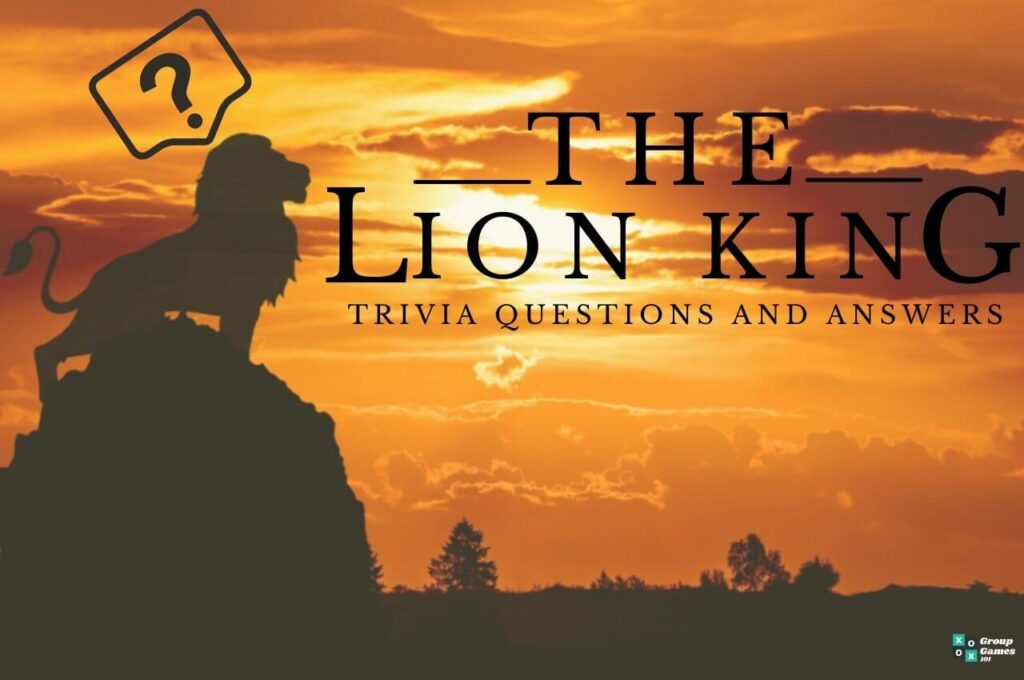 Take on our ultimate Lion King trivia to see if you can be crowned the King or Queen of Lion King knowledge! There are 5 fun-filled rounds to play – try one, or take them all on!

Disney’s Lion King movie hit our screens in 1994 and quickly became a global success, with a huge fan-base that remains strong to this day.

What isn’t there to love about this movie? The music, characters, moral messages, and scenery are just a few of the endearing qualities of The Lion King.

Find out how much you remember by completing each specialized round of our Lion King trivia!

Some questions even Mufasa himself would struggle with!

Welcome to the start of our Lion King trivia – although, if you thought this would be a simple walk through the Pride Lands, think again!

Some questions here are a little tricky, but all have been created to bring back to your mind some of the very greatest aspects of this classic movie.

There will be time to think Hakuna Matata, but that time is not now.

There is a super fun mixture of questions designed to jog your memory and ensure you feel the love tonight in our general knowledge round.

1: What is the first animal we see in the movie?
A Rhino.
2: Name Simba's Mother.
Sarabi.
3: The Lion King was the highest-grossing animated film of all time until a 2003 movie release overtook it. What was this movie?
Finding Nemo.
4: What is the name of the opening song?
The Circle of Life.
5: How many Golden Globe awards has The Lion King won?
3.
6: What kind of animal is involved in the devastating stampede?
Wildebeest.
7: What creature is Scar tormenting the first time he appears on screen?
A mouse.
8: Who was forbidden to go to The Elephants Graveyard?
Simba.
9: What was the movie initially going to be called?
King of the Jungle.
10: What kind of animal is Pumbaa?
Warthog.
11: Who was Simba's best friend as a cub?
Nala.
12: What does Hakuna Matata mean?
No worries.

Everyone has a favorite character in The Lion King, and there are few with no endearing qualities; Scar aside!

See if they come up in this round of our Lion King trivia!

With most questions based on the main characters, this is a pretty simple round.

However, we do love to challenge you, so there may be a couple of real brain scratchers along the way!

1: What type of animal is Timon?
Meerkat.
2: What is the name of the wise Baboon?
Rafiki.
3: What type of bird is Zazu?
An African Red-Billed Hornbill.
4: What relation is Scar to Simba?
Uncle.
5: Who does Matthew Broderick provide the voice for?
Adult Simba.
6: Who is Sarafina?
Nala's Mother.
7: Who is the Royal Advisor?
Zazu.
8: Who claims to 'laugh in the face of danger'?
Simba.
9: Which American actress provides the voice for the sassy leading Hyena, Shenzi?
Whoopi Goldberg.

The Lion King will go down in history as one of the best animated musicals there ever was.

With a catalog of iconic sing-along songs, including multiple genres, that are still some of the best-loved tunes now, it is no wonder so many awards were won purely for the soundtrack.

This is actually the best-selling soundtrack album to an animated film in the United States, but how many of the songs can you recall?

And, how much do you know about the tracks?

1: Of the 5 songs nominated for Best Original Song in 1994, how many were from The Lion King?
3.
2: How many songs are in the original Lion King movie?
12.
3: What line comes before 'Well, I've never seen a king of beasts, with quite so little hair' in I Just Can't Wait to be King?
I'm gonna be a mighty king, so enemies beware.
4: What language is Hakuna Matata?
Swahili.
5: What is the following line to 'From the day we arrive on the planet'?
And, blinking, step into the sun.
6: What is the last song to be played in the movie?
Can You Feel The Love Tonight.

Iconic Lines of The Lion King Trivia Questions and Answers

The Lion King is almost 30-years old, yet many iconic lines still resonate today with people of all ages.

The dialogue is funny, witty, and at the same time, full of life lessons and highly motivational.

In honor of the most classic lines, we have dedicated a whole round of our Lion King trivia to test your knowledge of some of the things said.

For answers, it may be the character we want or the line they said.

1: How does Simba describe grubs after eating them for the first time?
Slimy…yet, satisfying.
2: Who says 'While others search for what they can take, a true King searches for what he can give.'
Mufasa.
3: 'What do you want me to do, dress in drag and do the hula?' is a line delivered by which character?
Timon.
4: Who sang the line, 'Everywhere you look, I'm standing in the spotlight.'?
Simba.
5: How does Rafiki finish this line 'The past can hurt. But, from the way I see it…'
You can either run from it or learn from it.
6: When Mufasa advises Simba from heaven, he tells him he is more than what?
What he has become.
7: Who uses venom to deliver this line 'Long live the King.'
Scar.

Fun Facts About The Lion King Trivia Questions and Answers

So far, all we have talked about is the moments we saw on screen, but what about those off-screen moments we didn’t see!

In the final part of our Lion King trivia, we will reveal some fascinating facts and show secrets that are less well-known.

Ready to learn some of the lesser-known things about this incredible movie?

This is the round to do it!

1: What movie was being developed at the same time that most of the Disney animation team chose to work on instead of The Lion King, believing it would be the more successful?
Pocahontas.
2: There are no recordings of what animal during the entire movie?
Lions; Frank Welker provided all the lion roars.
3: What song was originally left out of the finished movie before Elton John lobbied for it to be added?
'Can You Feel the Love Tonight.'
4: What is always shown on Scar that is never shown on other lions?
Claws.
5: The Lion King was the first Disney movie to be dubbed in what language?
Zulu.
6: Pumbaa is the first Disney creation to do what on screen?
Break wind.
7: How is John Bon Jovi connected to the movie?
His hair was a model for Simba's mane.

How well did you do with our Lion King trivia? Did you learn anything new? We hope you enjoyed playing, anyway! If you fancy another challenge, here are some you may like:

Thank you for playing our Lion King trivia. It is a timeless movie that we could have written about all day long, but instead, we think it’s time to dust off the VHS and give it another watch!

Goodbye for now, and Hakuna Matata!